‘Myanmar wants to drive out all Muslims’: Q&A with Kyaw Hla Aung

If that’s the plan, the Burmese have been quite slack about it. There are mosques all over Burma and Mohammedans from Arabia along with their Western useful idiots are making sure that the “Rohingya” issue is constantly on the cooker.

Leading lawyer speaks to Al Jazeera on plans for repatriation of Rohingya refugees and anti-Muslim sentiment in Myanmar. 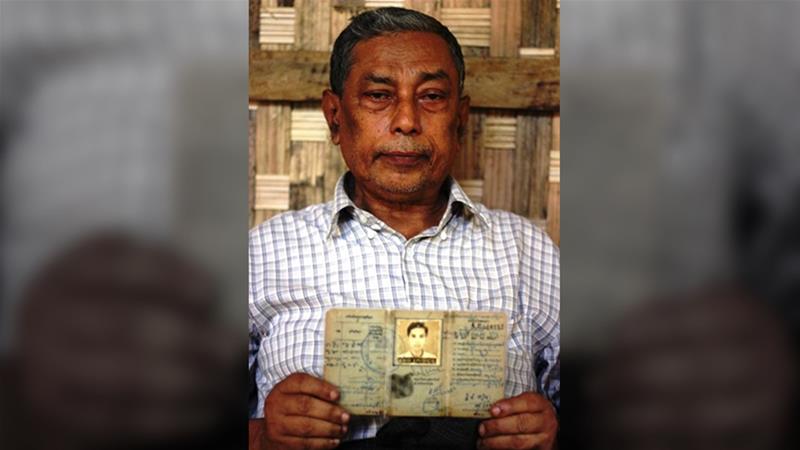 Doha, Qatar – U Kyaw Hla Aung is a well-known lawyer and activist who has been fighting for the rights of the Rohingyaethnic group in Myanmar for decades.

The 78-year Rohingya man was awarded this year’s Aurora Prize by the Armenia-based Aurora Humanitarian Initiative for his advocacy of rights for the persecuted mostly Muslim minority.

He donated the $1m he received in prize money to humanitarian organisations providing medical aid and assistance to Rohingya refugees.

Nearly a million Rohingya were forced to take shelter in neighbouring Bangladesh after Myanmar’s army, responding to attacks by an armed group, launched a brutal campaign against the minority in the country’s western Rakhine state last year.

The Rohingya have faced persecution in Myanmar for decades. The military government, which took power following a coup in 1962, stripped the Rohingya of citizenship in 1982.

Since 2012, following deadly riots between Rakhine Buddhists and Rohingya, tens of thousands of people from the minority have been forced to live in squalid internment camps.

Hla Aung, who was born in the city of Sittwe in Rakhine state, spent more than 12 years in jail for his political work on behalf of the Rohingya people.

Al Jazeera caught up with the veteran activist in November in the Qatari capital, Doha, where he was invited to attend a global health conference.

Al Jazeera: Why have Rohingya been denied citizenship in Myanmar? What are the criteria for citizenship?

Hla Aung: According to the 1948 citizenship law, a person who lived in Myanmar for 10 years and eight years continuously was eligible for citizenship. They are denying us citizenship since 1982.

A person who shows he owns land, should be accepted as citizen. But that’s not happening.

In 1964, Myanmar’s ruler General Ne Win nationalised all the shops, farms and companies owned by Indians, Pakistanis and the Chinese. He drove all the foreigners from Myanmar. At that time they didn’t drive out the Rohingya people.

Rohingya belong to this land, they were recognised by the previous democratic governments, including under Prime Minister U Nu. But after the military coup [of 1982], they said Muslims were not a people of Myanmar.

After driving all the Rohingya out they will go after all Muslims from across Burma [Myanmar]. They have a plan to drive out all the Muslims from this land.

Al Jazeera: What do you think about the planned repatriation of Rohingya?

Hla Aung: I do not trust Myanmar officials on the repatriation issue because they have not taken action against people who looted Rohingya property and cattle. So how can these people go back? Also, there is no protection [for the returnees] by law or by the government.

Al Jazeera: Can you tell us about the situation on the ground for the Rohingya in Myanmar?

Hla Aung: The government is biased against Muslims. Earlier, Rohingya people were represented in government departments such as the police, military, administration, education etc.

But this has changed over the years.

Successive governments have gradually denied Muslims jobs. I worked for a government company for over 20 years. I was jailed for writing a petition to General Ne Win against forced confiscation of lands belonging to Muslims in 1986.

Al Jazeera: You have lived in Rakhine state for more than 70 years. How were relations between Muslims and Buddhists when you were young?

Hla Aung: Before 1960, we lived together, we had very good relations. We could apply for jobs and that’s how I was appointed as a stenographer. I got a promotion and faced little discrimination because of being a Muslim. Now, even judges discriminate between Muslims and Buddhists.

Al Jazeera: Why do you think there is so much anti-Muslim sentiment in Myanmar?

Hla Aung: They say that they are afraid of Muslims because they believe Muslims are spreading in the country.

The anti-Rohingya campaign has high-level political backing. But very few people are friendly. Buddhist people hate Muslims. The majority are against Muslims, only a tiny minority want to live together.

Al Jazeera: What are the issues facing the Rohingya community?

Hla Aung: Our people are not well educated. I want to give them education so they can know about their rights. I organise our people to be educated so that they will have courage to fight for their rights. In my opinion, education is the first priority for me.

Due to the lack of health facilities 500 to 1,000 will die but without education, the whole community will die within 10 years.

Al Jazeera: Tell us about the education initiatives you have undertaken in Rakhine state?

Hla Aung: We have opened schools and appointed nearly 121 teachers since 2012. We are reaching more than 10,000 students in villages.

Rakhine teachers do not come to Muslim villages. We collect some donations from our people to run the schools. I also approached Nobel laureate Shirin Abadi to help get funds.

I was arrested for my education initiatives. President Thein Sein granted me a pardon after one and a half years in prison. I was released on October 7, 2014.

Al Jazeera: Tell us about the democratic transition project pushed by Thein Sein?

Hla Aung: Thein Sein started the process of driving out Muslims from their land. He is the man behind the anti-Muslim policies.

Al Jazeera: You contested elections in 1990. Why didn’t you win?

Hla Aung: I could have won but they didn’t allow me. I was a candidate in 1990 parliamentary election. I was the vice president for National Democratic for Human Rights party.

Before the election, the western commander arrested me. I was imprisoned by a court-martial.

Al Jazeera: Tell us about your family.

Hla Aung: My parents were from Mrauk U but I was born in Sittwe during World War II. We fled from one village to the other as the fighting raged. At that time my father was head clerk of the state court. Our house was destroyed by the Japanese army.

In 2012, my house was destroyed by Rakhine terrorists. I have not been able to go back to my own house since then.

I worked for MSF for 14 years until 2012. MSF was kicked out by Rakhine terrorists and the government because the medical charity did not discriminate between Rakhine, Hindu and Muslims.

Al Jazeera: You spent more than a decade in jail. Why?

The first one was for writing a petition in support of Rohingya farmers. Then I was accused of organising people to set fire to houses. In the 2013 case, I was blamed for stone-throwing incident against government officials.

Al Jazeera: Do you think Myanmar will accept the Rohingya?

Hla Aung: They will never accept us. They deny our existence, they consider us as illegal immigrants.

Al Jazeera: What is the future of the Rohingya people? What are your hopes from the international community?

When I went to Armenia to receive the Aurora award, their government assured me that they will help us. I asked them to stand behind Rohingya at the UN.

Hla Aung: It is indeed genocide because government does not accept the word Rohingya.

The government is not allowing the investigations of cases from the scene of the crimes. The International Fact-Finding Mission on Myanmar formed by the UN has not been allowed to enter Myanmar.