This isn’t the first time. Naturally, she is all for the so-called palestinian “Right of Return”, which would result in Israel’s destruction. 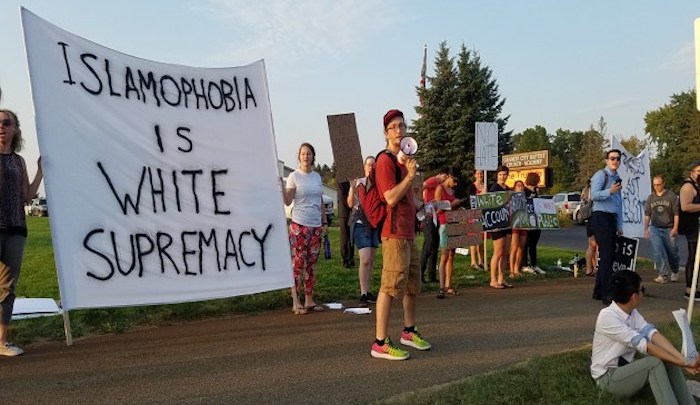 Indeed they have. The idea that opposing jihad mass murder and Sharia oppression of women, non-Muslims and others would be stigmatized and marginalized to the degree that it is today is breathtaking. Most people now take for granted that any negative statement regarding Islam, even criticism of jihad terrorists, is “Islamophobic” and to be shunned and silenced. And so the advancing jihad is essentially unopposed; most people are afraid to say a word. And the social media giants are steadily choking off all criticism of Islam; even MasterCard and Discover have now begun denying their services to those who dare to violate Sharia blasphemy laws.

A vote for labor is a vote for Islam ☪️

The Labor Party apparently seeks to extend the reach of section 18C of the Racial Discrimination Act to cover religion. Chris Merritt, legal affairs editor of the Australian newspaper, reports that Labor is considering a plan to extend the reach of litigation based on section 18C to include people claiming they have been offended or insulted because of their religion. In other words, this party wishes to establish ‘Sharia law by stealth’ in order to prevent people ‘offending’ Islam. The proposal comes from Dr Anne Aly, a Muslim Labor MP from Western Australia.

Labor’s federal Attorney General Mark Dreyfus has confirmed that Labor would support such changes to 18C.

QUIT YOUR JOBS AND GIVE US CASH

Its a guilt-based shakedown operation.

Australia has thrown hundreds of millions of dollars at Fiji and other Pacific islands to appease their climate change gods, yet still the islands want more, more, more:

More below the fold.
. Have a look at this disgusting hateful thing they have done in Newtown Sydney. The left now think it’s appropriate to draw someone doing a Nazi salute whilst calling everyone a Nazi. We have contacted Newtown Police and Sydney City Council. We urge everyone to do the same. It’s behind the Botany View Hotel in Newtown.

“I urged your predecessor repeatedly to honour his commitment to clean energy,” he told the state dinner.

“From where we are sitting, we cannot imagine how the interests of any single industry can be placed above the welfare of Pacific peoples and vulnerable people in the world over.”

At that point, with the Fijian leader telling Australia our jobs were worth less than his island flooding fantasies, Scott Morrison should have walked out. Instead, Morrison – who at least correctly identified Bainimarama’s rebuke as code for “give us more money” – offered some spineless green-pleading:

“We have already made financial commitments, some $200 million already invested, $100 million further, here and in Fiji alone most recently.

“And into the future we will continue to fund these resilient works in the Pacific, and we’ll do it directly.

“As I’ve said, we won’t be doing it through global climate funds or anything like that, we’ll be doing it directly in our ongoing programs to support climate change resilience works and preparedness here in the Pacific.”