The Saudi teen remains in real and terrible danger because she has renounced Islam. She has shut down her Twitter account due to death threats.

Rahaf Mohammed Alqunun, a Saudi teenager, has just tried to save her own life—and in so doing, has risked death for shaming her family and her country.

Rahaf fled her family vacation in Kuwait, took a plane to Bangkok, barricaded herself in her hotel room at the airport and began posting about her plight on social media.  She demanded political asylum.

Via her smartphone, Rahaf claimed that she had renounced Islam and that her family would surely kill her if she was returned to them. Rahaf obtained 90,000 followers on Twitter. The media began to cover her plight.

The Thai government had been about to deport her back to the family which Rahaf claimed had beaten and imprisoned her for up to six months at a time for minor, alleged offenses. And then, it changed its mind and allowed Rahaf to meet with an official from the UN’s refugee agency (U.N.H.C.R.).

Rahaf wanted asylum in either Australia or Canada and both countries considered her request even as she was being vetted for “refugee” status.

But make no mistake. She remains in real and terrible danger. She has shut down her Twitter account due to death threats.  Her family will never, ever stop coming after her.

She is a disobedient woman and as such deserves constant humiliation, beatings, broken bones, solitary confinement, and, if she is lucky, a forced marriage to a man the age of her grandfather, who already has three wives and twenty children. She is also an apostate. This is a capital crime.

By now, her father and brother are probably already in Thailand. They are both her “guardians” or “minders” and she has absolutely no western-style “agency” over this matter. They are claiming that she needs “medical attention.”

I have conducted four studies about honor killing globally. I am now working on a fifth study which seeks to identify the variables associated with successfully escaping from being honor killed. Rahaf exemplifies a pattern.

For reasons as yet unknown, Rahaf has decided that her life is worth preserving and that she no longer has to absorb the normalized brutalization and subordination that Saudi women are fated to endure. In addition, she has cannily used the power of social media to attract attention to her plight. Further, she has been able to liaison with government, international, or law enforcement authorities who believe she is in danger—or who know that if they return her and she is “disappeared” or murdered that they would be viewed as accomplices by a watchful world.

In this instance, the internet has played a crucial role in her potential salvation.

So many other Saudi women and dissidents were not as lucky. According to Ali Alyami, the founder of the D.C. based Center for Democracy and Human Rights in Saudi Arabia (CDHR), other Saudis have tried to save their own lives but have not been successful. He notes Hamza Kashgari (2012) and Dina Ali Lasloom, (2017) both of whom tried to escape after being labeled, respectively, a heretic and a disobedient woman. They were both sent back to the Kingdom and have not been heard from ever since. Alyami also notes how many men and women are literally rotting in prison in Saudi Arabia as dissidents and feminists.

I remember the tragic 1977 case of Saudi princess Mishaal bint Fahd al Saud, who fell in love with a young man of her own choice and was trying to escape from the Kingdom. Her fiancé (not her lover) was be-headed in a botched execution and she was, mercifully, merely shot to death. Being an al Saud did not spare her. Au contraire.

I remember the forty-seven Saudi women who, in the early 1990s, launched the first Drive-In and who were arrested, fired from their jobs, and placed under house arrest for more than a year.

Today, Eman Al-Nafjian languishes in prison where she is being tortured and sexually assaulted as a campaigner for women’s rights.

The feminist revolutions in the West have caught fire in the East where some of the bravest people on the planet are demanding their freedom and dignity.

I hope the world’s governments heed their cries and grant them political asylum. They are Children of the Enlightenment and it is the midnight hour.

Rahaf has just been granted asylum in Canada! I wonder how much it will cost them to provide security for her for the rest of her life?

Again and again we see it: it seems as if the top priority for the establishment media all over the West is to make sure that no one gets a negative view of Islam, no matter how high the jihad body count rises, and no matter how many people such as Rahaf Mohammed give eyewitness testimony to the oppression of living under Sharia. 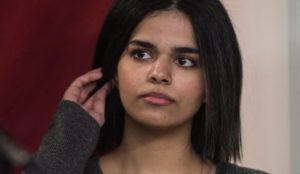 “Outrage as Swedish TV Cuts Word ‘Islam’ From Saudi Refugee Girl Story,” Sputnik, January 17, 2019 (thanks to The Religion of Peace):

The story of Rahaf Mohammed, an 18-year-old Saudi girl who has become an international media darling for her flight to the West from “persecution”, aired by Swedish national broadcaster SVT has made Swedes see red.

In their piece on Rahaf Mohammad, the Saudi refugee girl who claimed to have suffered “abuse” back home due to her non-conformist behaviour, SVT omitted the reference to Islam, triggering many Swedes’ ire.

In the interview aired by SVT Aktuellt, Rahaf Mohammed said that she was kept locked up for six months after getting a short haircut and suffered abuse from her brother and her mother. The reason for it, she claimed, is that short haircuts for women are forbidden in Islam, because it makes women look like men.

However, SVT‘s translation left out the Islam reference completely, with words “Islam” and “haram” (“forbidden” in Arabic) conspicuously absent from the subtitles, despite clearly being uttered by the teen.

This mismatch was first observed by Sweden Democrat politician Kent Ekeroth, who compared the Swedish translation with the original English subtitles and summed up his findings in a piece in the news outlet Samhällsnytt, raising suspicions about state-sponsored censorship….

​Others ventured that SVT‘s handling of the news content in accordance with its so-called “value base” was tantamount to “fake news”. Yet another recurrent theme in the comments was that Sweden had allegedly “caved in” for Islam….

SVT is the Swedish national public television broadcaster; it is funded by a public service tax on personal income and largely modelled after the BBC.

2 thoughts on “Rahaf’s Saudi family will never, ever stop coming after her”