Wearing hijab VOLUNTARILY in a free society means one thing “I support Sharia”. Judge Jeanine was 100% correct in her connecting the hijab with Sharia. But under our current political environment criticizing the hijab has become taboo.– Nonie Darvish

Omar has made it clear she does not support Israel, and has been accused of making numerous anti-Semitic remarks.

“Think about it: Omar wears a hijab,” Pirro said on her show. “Is her adherence to this Islamic doctrine indicative of her adherence to Sharia law, which in itself is antithetical to the United States Constitution?” Reporter Yashar Ali said Kamal will not face repercussions for speaking out against Pirro, batting away speculation that she would be fired as “lunacy.”

Now let’s take a closer look of who Hufsa Kamal is and what she stands for. And let’s not forget that Saudi princeling Al Waleed bin Talal owns a fair share of Fox.

Hufsa calls herself “Paki -American”. Claims to be ” England born, Tennessee raised.”  She doesn’t wear hijab, (not yet) but defends it as if her life depended on it.

Ilhan Omar thanks Fox for rebuking Jeanine Pirro, but Pirro is right: Hijab is a Sharia imperative

Jeanine Pirro said: “Think about this: She’s not getting this anti-Israel sentiment doctrine from the Democrat Party. So if it’s not rooted in the party, where is she getting it from? Think about it. Omar wears a hijab, which according to the Quran 33:59, tells women to cover so they won’t get molested. Is her adherence to this Islamic doctrine indicative of her adherence to Sharia law, which in itself is antithetical to the United States Constitution?”

For that, Fox rebuked her and demanded she apologize. She had no genuine reason to do so. Sharia is indeed inveterately antisemitic: the Qur’an demonizes the Jews in numerous ways. It depicts the Jews as inveterately evil and bent on destroying the well-being of the Muslims. They are the strongest of all people in enmity toward the Muslims (5:82); they fabricate things and falsely ascribe them to Allah (2:79; 3:75, 3:181); they claim that Allah’s power is limited (5:64); they love to listen to lies (5:41); they disobey Allah and never observe his commands (5:13). They are disputing and quarreling (2:247); hiding the truth and misleading people (3:78); staging rebellion against the prophets and rejecting their guidance (2:55); being hypocritical (2:14, 2:44); giving preference to their own interests over the teachings of Muhammad (2:87); wishing evil for people and trying to mislead them (2:109); feeling pain when others are happy or fortunate (3:120); being arrogant about their being Allah’s beloved people (5:18); devouring people’s wealth by subterfuge (4:161); slandering the true religion and being cursed by Allah (4:46); killing the prophets (2:61); being merciless and heartless (2:74); never keeping their promises or fulfilling their words (2:100); being unrestrained in committing sins (5:79); being cowardly (59:13-14); being miserly (4:53); being transformed into apes and pigs for breaking the Sabbath (2:63-65; 5:59-60; 7:166); and more. They are under Allah’s curse (9:30), and Muslims should wage war against them and subjugate them under Islamic hegemony (9:29).

“O Prophet, tell your wives and your daughters and the women of the believers to bring down over themselves their outer garments. That is more suitable that they will be known and not be abused. And ever is Allah Forgiving and Merciful.” (Qur’an 33:59)

“Narrated `Aisha (the wife of the Prophet): `Umar bin Al-Khattab used to say to Allah’s Messenger (ﷺ) “Let your wives be veiled” But he did not do so. The wives of the Prophet (ﷺ) used to go out to answer the call of nature at night only at Al-Manasi.’ Once Sauda, the daughter of Zam`a went out and she was a tall woman. `Umar bin Al-Khattab saw her while he was in a gathering, and said, ‘I have recognized you, O Sauda!’ He (`Umar) said so as he was anxious for some Divine orders regarding the veil (the veiling of women.) So Allah revealed the Verse of veiling. (Al-Hijab; a complete body cover excluding the eyes).” (Bukhari 79.14.6420)

Wearing hijab is a sign that one accepts these imperatives. That is not necessarily true, as lots of women of all perspectives wear headscarves, but when a Muslim woman wears hijab, it’s reasonable to surmise that she accepts the Qur’an and Sunnah, the sources of Sharia. Sharia denies the freedom of speech, the freedom of conscience, the equality of rights of women, and the equality of rights of non-Muslims. Wearing hijab is a sign of adherence to Sharia. So what did Judge Jeanine Pirro say that was wrong about Ilhan Omar? She asked questions that need to be asked. 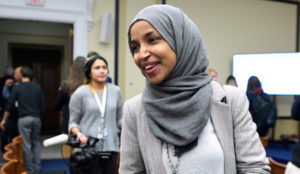 “We strongly condemn Jeanine Pirro’s comments about Rep. Ilhan Omar,” Fox News said in a statement last night. “They do not reflect those of the network and we have addressed the matter with her directly.”

Today, Omar thanked Fox News for its statement, tweeting, “Thank you, @FoxNews. No one’s commitment to our constitution should be questioned because of their faith or country of birth.”…

Thank you, useful idiots. The moment Ilhan Omar and her ilk have the upper hand, they will will bind you firmly and cut your heads off as prescribed in the quran.

4 thoughts on “Fox in the Saudi Tent”