Qanta Ahmed’s Denial of the Reality of Islamic Anti-Semitism 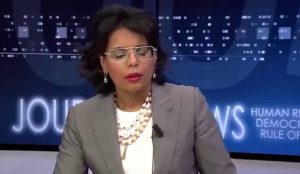 Qanta Ahmed is a poised and eloquent defender of “moderate” Islam. A British-American pulmonologist now serving as an Associate Professor of Medicine at the State University of New York, she also describes herself as a specialist in the study of Islamism as contrasted with Islam.

Recently, she has written opinion pieces firmly skewering Rep. Ilhan Omar (D-MN) for her incontrovertible anti-Semitism and the Democrat Party for failing to promptly (or even belatedly) reprimand her for her bigotry and put her on notice concerning any future slurs. One such piece appeared Feb. 14th in the Daily Caller by the title “Ilhan Omar Brings Shame To American Muslim,”which Robert Spencer, Director of JihadWatch, so ably pilloried in a post on Feb. 2oth. A few days ago, the Fox News website carried her message under the lengthy banner “Ilhan Omar is an anti-Semite who brands criticism of her as anti-Muslim bigotry – but she’s the real bigot.”

In my opinion, Ahmed diagnoses the problem correctly, but she gets the etiology wrong. That is, she rightly condemns the anti-Semitic hatred of Ilhan Omar’s statements, but she wrongly attributes that antipathy to a modern fiction known as “Islamism” rather than to orthodox Islam itself. Since Ahmed clings to a belief in Islam as “moderate”, she cannot allow herself to see that the problem of Omar’s anti-Semitism finds its roots in the Qur’an and Sunna of Muhammad.

Ahmed declares, in purported contrast to Omar, “I don’t hate Jews and I don’t hate the Jewish state of Israel.” In fact , she goes on to say,

I have studied the Koran and know it says Jerusalem belongs the Jews. The Koran devotes an entire chapter to the Children of Israel – and considers the Israelites to be a nation bestowed with special Divine favor.

This is a highly misleading statement. As a matter of fact, Jerusalem is never mentioned by name in the Qur’an. Everything Ahmed declares positively about the Jews and Israel rests upon only one passage in Islam’s holy book, 5:20-21, which reads:

Remember Moses said to his people: “O my people! Call in remembrance the favour of Allah unto you, when He produced prophets among you, made you kings, and gave you what He had not given to any other among the peoples. O my people! Enter the holy land which Allah hath assigned unto you, and turn not back ignominiously, for then will ye be overthrown, to your own ruin.” (Yusuf ‘Ali translation)

Ahmed’s reasons that since according to the Qur’an’s Moses Allah has assigned the holy land to the Jews, and since Jerusalem was/is within that holy land, Jerusalem must still belong to the Jews today, for Allah’s decrees cannot be reversed. So, not only do the Jews have the right to Jerusalem as their capital, they also are the rightful owners of all the land of Israel, because they are a specially favored people before Allah. Wow!

This raises the question, “How have the vast majority of Muslims (non-Arab as well as Arab) gotten this so wrong, not only in modern times but throughout Islam’s history?” Why has anti-Jewish vitriol spewed from the mouths and pens of Muslim leaders, scholars and commoners since the time of the sahaba (Muhammad’s early companions)? Why has this Qur’anic text not convinced the worldwide Muslim community that Qanta Ahmed is right and they are wrong?

The answer is fairly simple. Ahmed has failed to read this passage in the light of the rest of the Qur’an.

First of all, v. 21 declares that Allah has decreed this land for the Jews as long as  they “turn not back ignominiously [from jihad against the contemporaneous inhabitants], for then will ye be overthrown, to your own ruin.” This is a reference, of course, to the original conquest of the land after the Jews had been miraculously liberated from their slavery in Egypt. As subsequent verses in Sura 5 show, the bulk of the Jews, out of fear, disobeyed this divine command delivered by Moses, and so were punished with wandering in the wilderness for 40 years until that disobedient generation died off. Why does Allah remind Jewish listeners of this history? Because immediately preceding this story, Allah warns the Jews and Christians that “Now has come to you our messenger….” The sober implication is clear — if you do not obey Muhammad and become his followers, you will lose your favor with Allah and be treated as the disobedient Jews in the time of Moses.

The original decree of the holy land was dependent on the Jews’ obedience to Allah’s will. In refusing to carry out his commands, they lost their right to possess the land. Even though the next generation of Jews did conquer the land, the Jewish nation as a whole continued throughout its history to disobey God, and according to Islamic doctrine have become cursed and hated by Allah, eternal enemies to the Muslims and their god.

According to a statistical linguistic analysis of the Qur’an found on Dr. Bill Warner’s website www.politicalislam.com, though there are a few positive statements about Jews in the early Meccan revelations of Muhammad (while he was trying to curry their favor in support of his claim to be a true prophet of the one God), the Qur’an as a whole is virulently anti-Jewish. Overall, 18% of the content of the Qur’an is negative toward Jews. When you consider that Hitler’s Mein Kampf, which fueled the Nazi execration of Jews, devotes only 7% of its contents to anti-Semitism and yet stirred the Nazi party to such racist and anti-religious evil against Jews, why should we be surprised that Muslims by and large are today characterized by Qur’anically-induced loathing for Jews, and have been throughout their history, with limited exceptions? Ilhan Omar’s recent statements produce no surprise or condemnation among most Muslims around the world because they fit the mindset of Muhammad’s Islam as found in the Qur’an and Sunna.

For example, Jews are classified as infidels to be killed or subjugated (2.62; 5:69), unless they accept Islam, thereby becoming Muslims. Allah declares that only a tiny minority of Jews will convert (3.110, 199), leaving the vast majority as sinners destined for eternal fire (4;46, 162).

Because of their “obstinate rebellion and disbelief” (5.64), Allah has put mutual “enmity and hatred among them” until the Day of Judgment. As a result of their bitter hearts, “they ever strive to make mischief on the earth” (for which the appropriate punishment, according to 5.33, is:

“…that they be killed or crucified or that their hands and feet be cut off from opposite sides or that they be exiled from the land. That is for them a disgrace in this world; and for them in the Hereafter is a great punishment.”

According to 9.30-31, the Jews are not merely infidels but idolaters — those guilty of shirk, the worst sin against Allah , which the Qur’an declares unforgivable (4.48). Together with all other idolaters, they are “the strongest in enmity to the believers” (5.82; 3.186). They have “thrown away” the covenant which Allah originally made with them in favor of “some miserable [worldly] gain” (3.187) but their end will be a “painful torment.”

This conviction played itself out in Medina during the lifetime of Muhammad. When he arrived there from Mecca in 622, there were 3 prosperous and powerful Jewish tribes: the Qaynuqa, the Nadir and the Qurayza. In five years time, two of the tribes had been expelled (with the Muslims confiscating their lands, homes and possessions), and the third tribe lost their 700-900 adult males to beheading, while the women and children were farmed out as slaves.

One might argue that such Jew-hatred was limited to the time of Muhammad and that such horrible passages in the Qur’an no longer apply to Muslims in their relations to the Jews today. However, Islam claims that the Qur’an is the eternal and unchanging Word of Allah, written on an eternal book in heaven before history began. Its dictates are timeless and universal, unless Allah abrogates them with new revelation. There is no abrogation of such anti-Semitism in the Qur’an, and unfortunately there can be none in the future since Allah declares in 5.3, “This day I have perfected for you your religion and completed My favor upon you and have approved for you Islam as religion.”

To prove that Islamic hatred for the Jews is cemented in the Muslim psyche for all time we may turn to one of the most popular hadith traditions cited among Muslims both Sunni and Shi’ite. Found in both the collections of Bukhari and al-Muslim (the two most authoritative Ahadith works), the prophecy attributed to Muhammad reads thus:

Allah’s Apostle said, “The Hour will not be established until you fight with the Jews, and the stone behind which a Jew will be hiding will say. “O Muslim! There is a Jew hiding behind me, so kill him.” (Bukhari, 4.52.177)

Abu Huraira reported Allah’s Messenger as saying: “The last hour would not come unless the Muslims will fight against the Jews and the Muslims would kill them until the Jews would hide themselves behind a stone or a tree and a stone or a tree would say: Muslim, or the servant of Allah, there is a Jew behind me; come and kill him;
but the tree Gharqad would not say, for it is the tree of the Jews.” (Muslim, 7.41.6985)

In the final analysis, Qanta Ahmed is right in calling out Ilhan Omar’s hatred of Jews and Israel. However, she is wrong in attributing such a mindset to “Islamism” as something distinct from Islam. As the Qur’an, the Hadith and the early biographies of Muhammad’s life all confirm, anti-Semitism is baked into the revelation and practice of Islam from at least 622 on, when Muhammad moved to Medina and began his campaign to destroy all those opposing him, most notably the Jews.

Qanta Ahmed no doubt means well, but in deluding herself about the truth of Islam she is also deluding others. Her Islam is a chimera, for it flies in the face of the religion’s core teachings, but the rest of the Islamic world knows this and consequently ignores her words.