AHMED On @IngrahamAngle : @IlhanMN commits an assault on the memory of all those lost in 9/11 and my 9/11 survivor patients #IlhanOmar pic.twitter.com/Zil37dSiOW

“Radical Islam – also known as Islamism – is a deviant, fictional and extreme distortion of true Islam, perpetrated by Islamist Muslims who use it to justify hatred and lethal violence that in reality have nothing to do with Islam.”–Qanta Ahmed

Qanta Ahmed has created a fantasy Islam, one that exists in her mind and nowhere else. Qanta’s Islam is toxic and therefore not recommendable for infidel consumption. Some TV talking heads love Quanta, because she appears so Western, with her doctorate, and because she is so well spoken and so convincing. She offends no one; apart from the Koranimals in the mosques of course, who would stone her if only they could get their hands on her.

Qanta Ahmed, a naturalized American, accomplished doctor and liberal Muslim, is at it again. Claiming to represent true Islam, she has launched another diatribe against Ilhan Omar over her recent, infamous CAIR speech in which the Minnesota Democrat congresswoman described the 9/11 terrorist attacks as “some people did something.”

Ahmed quite rightly calls Omar “…a disgrace for me and other American Muslims with her outrageous, ignorant, anti-Semitic and now anti-American comments.” But then she misleads her readers by claiming falsely that Omar “…repeatedly projects a distorted and patently Islamist interpretation of Islam – a religion that in reality stands for the values of justice, peace and ethical conduct.”

Ahmed sets up a false dichotomy, painting Islam as a rosy religion of peace and harmony, and Islamism as a perversion of Islam, focused inexplicably on violence, bloodshed, hatred and terror. 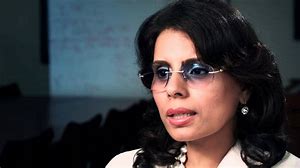 She never explains how Muslim “radicals” could ever come up with their worldview and attribute it to Islam, or how Muslims from disparate realms and cultures could come to the same conclusion — that they are compelled to violent jihad against the non-Muslim world — with nothing in common except the Qur’an, the traditions of Muhammad, and fourteen hundred years of bloody Islamic history.

All evidence to the contrary, Ahmed vainly tries to separate Islamism from Islam. Were Muhammad alive today, he would thrash her for hypocrisy — attempting to portray his
“revealed religion” as something less than it is.

She is like a chef touting the wonders of the death cap mushroom, deadly poisonous as its name implies, by claiming the mushroom itself is beautiful and healthy, and that the poison dwelling in every aspect of the mushroom has nothing to do with the mushroom itself. Yet the two are impossible to separate.

Ahmed skillfully pillories Omar’s vile 9/11 dismissal by drawing attention not only to the initial murder and carnage perpetrated by the Muslim attackers but also to the ongoing fallout over the almost 18 years since — deaths due to disaster-related diseases contracted by rescuers, chronic mental health issues among survivors and family members of those lost in the massacre, and the fear and animus generated in the non-Muslim world toward Muslims as a result of this (and 34,800+ Muslim terrorist attacks worldwide since 9/11).

She remarks that on that fateful day of the attack, while working as a physician in Riyadh, Saudi Arabia, she turned on the TV at 4 pm to witness live the World Trade Towers being hit by hijacked jetliners.

“Living at the time in the Saudi Kingdom – the epicenter of Islam – as the world learned the identity of the 9/11 terrorists, I wondered how my religion had been hijacked by suicidal killers who claimed they had a religious duty to kill innocents.

And I knew from that moment that these murderers would now become the face of Islam for many non-Muslims who know little about a religion with more the 1.6 billion followers around the globe.”

One wonders about the reaction of the many Muslims around her in the streets of Riyadh at the first news of the jihadi attacks on the USA. Were they as horrified as she, or was there dancing, horn-honking and the sharing of sweets at this blow struck against the Great Satan, as America is labeled from the pulpits of mosques across the Islamic world? Perhaps Qanta Ahmed will share her recollections with us someday.

Nevertheless, Ahmed herself is desperate to show that the Islamism of the hijackers is a poison that has nothing to do with the death cap mushroom of true Islam.

“Radical Islam – also known as Islamism – is a deviant, fictional and extreme distortion of true Islam, perpetrated by Islamist Muslims who use it to justify hatred and lethal violence that in reality have nothing to do with Islam.”

So, from where do these deviant radicals get their non-Islamic ideas that they associate with Islam? Could it be from any of the 109 verses addressing jihad that are found in the Qur’an, or the numerous Qur’anic decrees painting disbelievers and hypocrites (vacillating Muslims) as the enemies of Allah whom true believers as instruments of Allah’s wrath are called to punish? Could it be from “holy texts” that promise those who kill and are killed in the way of Allah that they will find eternal sensual pleasures beyond imagining as a reward for their brutal conquests on earth?

Might their penchant for terror find its roots in the example of their prophet, whom the Qur’an presents as the “beautiful pattern” (33:21) for all human beings to emulate? It is Muhammad, according to the most reliable of Hadith sources, who declared, “I have been made victorious through terror” (Sahih Bukhari, 4.52.220).

Where could Islamists have developed their enmity toward Jews? Certainly not from the dozens of Quranic texts which paint the Jews as evil, untrustworthy, greedy, treacherous, cursed by Allah, stubborn, lying disobedient, scheming, dirty/unclean? Or from the Hadith traditions? One of the most famous of these (even ensconced in the Hamas Charter) and repeated often, prophesies:

Why does Qanta Ahmed not acknowledge these seminal, authoritative Islamic texts? Only she knows. Instead, she peddles her own fictional Islam, though making very little effort to defend her version from Muslim sources. Islam, she protests is “…a religion that in reality stands for the values of justice, peace and ethical conduct.” To support this, she quotes one verse from the Qur’an, prefacing it with a sentence meant to impress readers with the Qur’an’s commitment to justice:

In fact, the holy texts of Islam emphasize that one’s greatest allegiance should be to justice – even if doing so demands superseding family and coreligionist ties.

“Be strict in observing justice, and be witness for Allah, even though it be against yourselves or against your parents or kindred,” the Koran says in Chapter 4, Verse 36.

One evidence that the Qur’an is not really very important to Qanta Ahmed’s understanding of Islam is the fact that she misattributes this text to Sura 4, v. 36. As a matter of fact, the text she quotes is found in Sura 4, v. 135 — only 99 verses later….

And there are two points to make with regard to this boilerplate teaching on justice: first, every religion worth its salt claims that justice is a virtue that shows no partiality, for partiality whether to parents or kindred or self is obviously a denial of justice. Islam is not to be lauded for promoting something so obvious and found in all major religions. Second, justice in Islam is defined by the decrees of Allah, which are weighted in favor of believers and against disbelievers. This is why Islam enshrines jihad warfare, slavery, sexual abuse against non-Muslim girls and women, and dhimmitude status on recalcitrant Christians and Jews. Such treatment is just, because Allah declares it so. In Allah’s kingdom, non-Muslims do not share the “justice” that Muslims are meant to enjoy.

Yet even if Islam championed true justice, as the other religions do, that is not the issue. What sets Islam apart is not where it agrees with the other religions of the world, but where it differs — and on this front Qanta Ahmed wills herself to be blind. Islam is the only religion whose god demands his followers to pick up the sword to advance his kingdom until all the world is conquered; whose god tells his subjects they are the best of all peoples, and non-Muslims are the vilest of all created beings; whose law threatens doubting adherents with beheading should they recant their allegiance.

Ahmed has created a fantasy Islam in her own mind, one which ignores the vast evidence of Islamic texts and history, and from this castle in the sky, she launches attacks against Ilhan Omar, whose Islam sadly is much closer to the Muslim Brotherhood and that of the 7th C. desert prophet himself.

One could wish that Ahmed’s version of Islam were true, but to act as if that were the case would be like sauteing a large batch of death cap mushrooms on the advice of a foolhardy chef and serving them to friends and family — deadly.