Christians are a soft target.

That’s when Mohammedans hit, because Buddhist’s fight back:

This man is one of the alleged suicide bombers who carried out the #SriLankaTerrorAttack. pic.twitter.com/A3cwQvD2Kk Theresa May after NZ mosque attack on Muslims.

Theresa May after #SriLanka attacks on Christians

Why does Islam always matter more to Christian leaders?

He never expected such a thing to happen?

But Sri Lanka’s police chief Pujuth Jayasundara, according to AFP, “issued an intelligence alert to top officers 10 days ago, warning that suicide bombers planned to hit ‘prominent churches.’ ‘A foreign intelligence agency has reported that the NTJ (National Thowheeth Jama’ath) is planning to carry out suicide attacks targeting prominent churches as well as the Indian high commission in Colombo,’ the alert said. The NTJ is a radical Muslim group in Sri Lanka that was linked last year to the vandalisation of Buddhist statues.”

Did Jayasundara alert the “prominent churches”? If he did, did Ranjith disregard the warning? We may never know the answers to those questions, but in a larger sense it is easy to see, despite escalating Muslim persecution of Christians worldwide, why Ranjith “never expected such a thing to happen,” and so had no guards at the churches for Easter Sunday: all those who have been for years calling attention to this threat have been branded as “racist,” “bigoted” and “Islamophobic,” and dismissed as “fearmongering.” Everyone in the Catholic Church knows that Islam is a religion of peace; dissenters are shunned and ostracized. Would it have been “Islamophobic” to have Sri Lankan churches guarded for Easter? 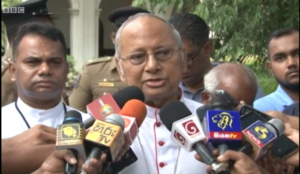 One thought on “Some people did something in Sri Lanka”