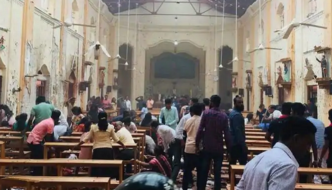 Robert Spencer: The Sri Lanka Jihad Massacre and the Decline of the West

Media crap-chooks are extremely careful with their coverage.

No fancy analysis of wording in statements.

And they won’t spend the coming weeks hysterically denouncing “Christianophobia” and warning about the Islamic threat.

The Sri Lankan Government is requesting that we do not make public the names and pictures of the terrorists. Ignore them. The government has no right to hide this information from its citizens. Make everything public and expose those corrupt politicians and lying journalists.

There’s no such thing as an “Islamist”.  Mohammedans are by nature militant. So why not call them ‘soldiers of Allah’ for accuracy?

Officials in Sri Lanka continued to block the nation’s access to social media Monday; fearing more bloodshed after ‘Islamist militants’ launched a series of bombings across the country on Easter Sunday that claimed the lives of nearly 300 people. 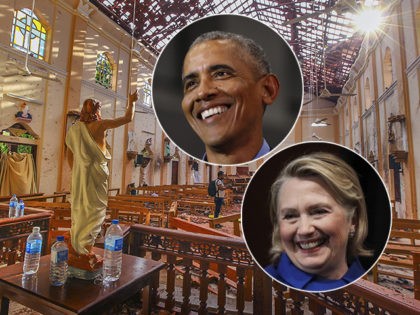 Obama, Clinton, and other Democrats — including 2020 presidential contender Julián Castro — could not bring themselves to identify the victims of the attacks as “Christians,” calling them “Easter worshippers” instead in eerily similar responses.

What’s worse: Hillary Clinton and Hussein Obama calling the Christian victims of the terror attack in Sri Lanka “Easter worshippers” or Theresa May claiming the attack was against “churches and hotels”?

Mali’s prime minister resigned along with his entire government on Thursday following criticism over their handling of an upsurge of violence in the centre of the country and a massacre last month that left 160 people dead.

According to the minister, the Muslim suicide bombers belong to a terrorist group targeting “polytheists” for ascribing “partners” (Jesus) to God. They hold up a solitary finger, alluding to the tawhid: “There is no god but Allah” (Islamic concept of “Tawhid”)

All the same dreck. They all use the same Quran, the worship the same Muhammad and seek to implement the sharia.

Six things you need to know about Sri Lanka’s bombings

It was the first major attack on the Indian Ocean island since the end of a civil war 10 years ago.

Here’s what you need to know:

The first blast was reported at St Anthony’s Shrine, an historic Roman Catholic church in Colombo, just as church services began around 8:45am local time (03:15 GMT). Much of the church roof was blown off by the explosion, with roof tiles, glass and splintered wood littering the floor along with pools of blood.

The other two occurred at St Sebastian Catholic Church in Negombo, a majority Catholic town north of Colombo where footage showed people dragging the wounded out of blood-splattered pews, and at the Protestant Zion Church in the east-coast town of Batticaloa.

Soon after, police confirmed blasts at three high-end hotels in the capital – the Cinnamon Grand, the Shangri-La, and the Kingsbury.

Hours later, a blast was reported at a guesthouse near the national zoo in Colombo’s Dehiwala district.

The eighth explosion took place at a house in Colombo. Police and media said three officers were killed.

Harsha de Silva, Sri Lanka’s minister of economic reforms and public distribution, said he had been to two of the attacked hotels and was at the scene at St Anthony’s, where he described “horrible scenes”.

“I saw many body parts strewn all over,” he tweeted, adding there were “many casualties including foreigners”.

Who were the victims?

The blasts hit the churches when they were full of worshippers who gathered for Easter services. A detailed breakdown of casualties in the eight blasts was not immediately available.

A Dutch national and a Chinese national were also reported to be among the victims.

There was no immediate claim of responsibility, but Defence Minister Ruwan Wijewardene described the blasts as a “terrorist attack” by religious groups.

At least 23 suspects are now in custody.

Senaratne also hinted at a possible role of an international network in the Easter Sunday attacks, but gave no specifics.

Prime Minister Ranil Wickremesinghe told reporters “so far the names that have come up are local”, but investigators will look into whether the suspected attackers had any “overseas links”.

He also acknowledged that “information was there” about possible attacks. “While this goes on we must also look into why adequate precautions were not taken,” he said.

How did Sri Lanka react?

In a Twitter post, Wickremesinghe said: “I strongly condemn the cowardly attacks on our people today. I call upon all Sri Lankans during this tragic time to remain united and strong.”

President Maithripala Sirisena said he had ordered the police special task force and the military to investigate who was behind the attacks and their agenda.

In addition to the curfew, the military was deployed and security was stepped up at Colombo’s international airport.

What are world leaders saying?

Countries around the world condemned the attacks, and Pope Francis added an appeal at the end of his traditional Easter Sunday blessing to address the attacks.

Speaking from the loggia of St Peter’s Basilica Francis said: “I want to express my loving closeness to the Christian community, targeted while they were gathered in prayer, and all the victims of such cruel violence.”

US President Donald Trump tweeted his condolences on the “horrible terrorist attacks”, while Russian President Vladimir Putin said Moscow remains a “reliable partner of Sri Lanka in the fight against international terrorism”.

Turkish President Recep Tayyip Erdogan called the bombings “an assault on all of humanity”.

British Prime Minister Theresa May said: “The acts of violence against churches and hotels in Sri Lanka are truly appalling, and my deepest sympathies go out to all of those affected at this tragic time.”

What is Sri Lanka’s religious and ethnic mix?

The attacks on Sunday recalled the worst days of Sri Lanka’s 36-year civil war, which claimed up to 100,000 lives.

The island nation has a population of nearly 23 million, of which nearly three-quarters are ethnic Sinhalese. The Tamils, the second-largest ethnic group, make up more than 15 percent of the population and live mainly in the north and northeast of the country.

Muslims account for 10 percent of the population, and Christians about six percent.

The mistreatment of Tamils following independence from the British helped nurture the growth of armed separatists, leading to nearly three decades of armed conflict. The government defeated Tamil separatists in 2009.

In 2018, anti-Muslim violence flared across the hills of central Sri Lanka, fed by rumours spread over social media about attacks on Buddhists. A state of emergency was briefly declared in the wake of those attacks.