Crackdown on Islam Critics in Denmark

Tommy Robinson and the Double Standards of Political Violence 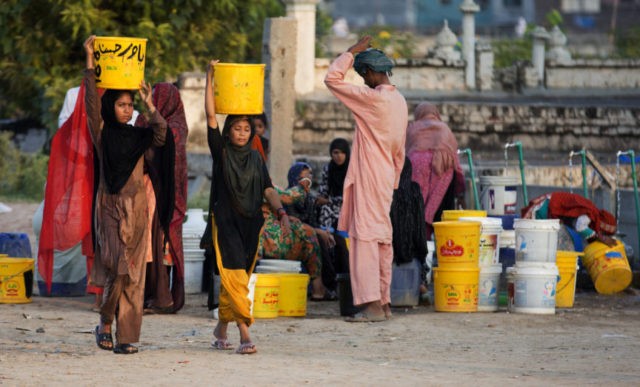 Armed Islamists stormed a heatstroke center in Pakistan on Thursday and forced them to shut down for allegedly violating fasting hours during the ongoing month of Ramadan, the holiest period for Muslims.

The Islamist assault in the city of Sukkur on Thursday forced a total of five water outlets in the Pakistani province of Sindh to close amid a heatwave, Pakistan’s Dawn newspaper reveals. Citing the social welfare organization known as the Edhi Foundation, Reuters reports that the heat has already killed at least 65 people in Sindh.

The armed Islamists reportedly fired in the air at one of the water outlets in the city of Sukkur in Sindh, prompting operators to flee.

In response, local authorities appear to have capitulated to the armed activists’ demands, advising the facility operators to shut down a total of five heat stroke centers in Sukkur despite the ongoing heatwave.

Atta-ur-Rehman, the officer in charge of the Municipal Water Works, indicated the centers “would be reopened after necessary consultations with the authorities concerned,” Dawnreveals.

The assault that forced the first center to shut down, carried by so-called activists of an unnamed radical religious group, took place at a water outlet in Sukkur’s Ayub Gate region.

According to Dawn, the Ayub Gate center is one of many facilities set up by the Sukkur Municipal Corporation (SMC) “to provide immediate relief to victims of heatstroke as the maximum temperatures in certain upper Sindh areas in recent days remained between 40 [104 Fahrenheit] and 47 [117 Fahrenheit] degrees Celsius.”

Taufiq Bandhani, an SMC contractor, told Dawn the armed Islamists told operators of several facilities to shut them “or face the consequences.”

The radical Muslim activists reportedly accused the operators of serving water to people who were not suffering from heatstroke, an allegation denied by the center employees.

“After repeatedly issuing such threats and getting annoyed by the operators’ defiance, a group of armed radicals stormed the Ayub Goth center and forced its operators to shut it down,” Dawn notes.

The Ayub Goth water outlets operate amid the Ramadan fasting hours, from 10 a.m. to 5 p.m. Some Islamists have deemed the operation of the centers a violation of Pakistan’s Ehteram-i-Ramazan Ordinance.

In 1981, the Pakistani government adopted the edict to preserve the sanctity of Ramadan.

Article 3 of the decree says:

(1) No person who, accord­ing to the tenets of Islam, is under an obligation to fast shall eat, drink or smoke in a public place during fasting hours in the month of Ramazan

Although most Muslims follow peaceful Ramadan traditions, many Islamists believe it is especially heroic and exceptionally rewarded by Allah to die a martyr during the holy month.

Along with jihadi groups like the Taliban and the Islamic State (ISIS/ISIL), Islamists and at times some media Arab media outlets and organizations “escalate incitement to jihad and martyrdom during this month,” the Middle East Media Research Institute (MEMRI) noted in 2015.

Islamic terrorist attacks tend to intensify during the holy month.

Residents of Sindh reportedly fear a repeat of the deadly heatwave that plagued their province in 2015, forcing Pakistan to declare a state of emergency as the death toll reached nearly 800.

One thought on “It’s Ramadan!”