Palestinian cleric Nidhal Siam says Russia, Britain and the United States have deployed their forces in the region not to fight Iran, but to prevent the rise of an Islamic state.

“Every Muslim “constitutes a time bomb that will explode as soon as the Caliph of the Muslims gives the order [to] come to jihad.”

And that, my friends, is what we’ve been saying here on this blog for many years now: all Muselmaniacs are commanded to kill & die for the sake of allah. There are no special dispensations for those who refuse. On the contrary, they must be killed. 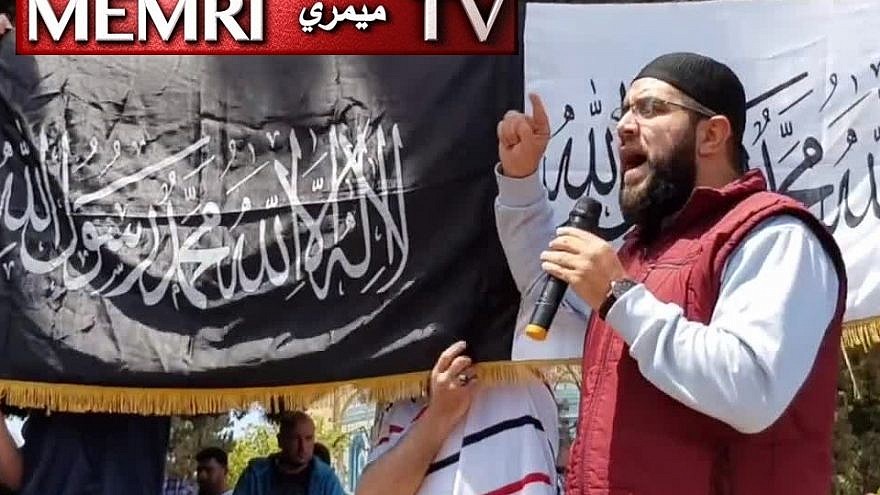 In this still image taken from a video posted on May 10, 2019, Palestinian cleric Nidhal Siam is seen addressing a crowd outside the Al-Aqsa mosque in Jerusalem. (MEMRI)
In a video uploaded last week to the Internet, Palestinian cleric Nidhal Siam “Abu Ibrahim,” speaking before a crowd at the Al-Aqsa mosque, said that this Ramadan, the Russian, American and British “devils” will be shackled.
.

He said that the “devils” know that every Muslim “constitutes a time bomb that will explode as soon as the Caliph of the Muslims gives the order [to] come to jihad.”

Abu Ibrahim said these countries have mobilized their armies throughout the Arab world in order to prevent the establishment of an Islamic state, not to fight Iran, which he said is a “seal ring on America’s pinky toe” that is “drowning in collaboration.”

He added that the emir of the believers will soon emerge and declare the liberation of Al-Aqsa.