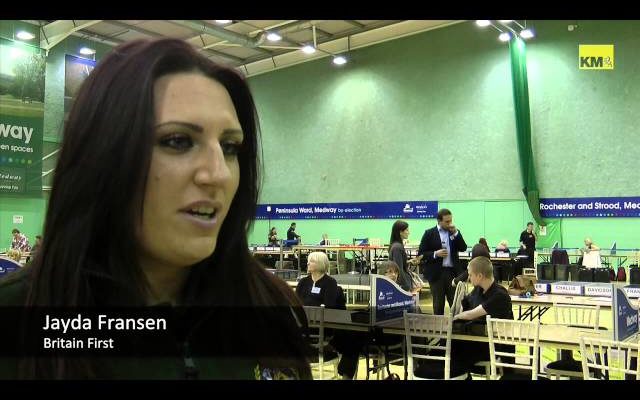 No one is put on trial for negative comments about Christianity or Judaism. This unhealthy exception stigmatizes political speech and suppresses criticism of one religion.

Robert Spencer had previously blogged about the Fransen case. This is what he wrote.

What they were really doing was calling attention to Muslim rape gangs, which have operated freely in Britain for years because police and other authorities were too afraid of being called “racist” to do anything about them. But that’s “hostility” to Islam and Muslims, and so Fransen and Golding must be imprisoned.

Now the inevitable sentence is in.

Jayda Fransen, 33, was found guilty of stirring up hatred during a speech about Islam in August 2017.

She was also convicted for separate comments at a peace wall in the city.

Convicting Fransen, of Moat Avenue in Donaghadee, County Down, a judge said her words were “a general, vehement attack against a religious group”.

The speech was made during the “Northern Ireland Against Terrorism” event two years ago.

What did Jayda actually say?

The court heard that Fransen told those gathered at the rally that there was no moderate version of Islam and that “these people are baying for our blood”.

She added: “Islam says every single one of you wonderful people here today deserves to be killed.”

Those attending the rally were then told it was time for the world to come together against “the one common enemy”.

The judge told the court: “I’m satisfied these words were intended to stir up hatred and arouse fear.”

Which of these comments are factually untrue?

The Koran does command the deaths of infidels. The non-existence of moderate Islam is a point asserted by countless Muslim and non-Muslim leaders. Like Erdogan.

“There is no moderate or immoderate Islam. Islam is Islam and that’s it,” Turkey’s Islamic leader has said.

Will the court send him to jail for denying the existence of moderate Islam? 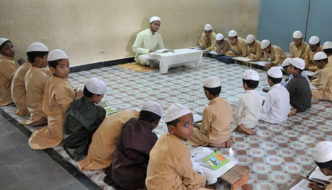 Just where do these Muslim kids in the UK get it from?

“A Secret Government report warns over 48 British Islamic schools are teaching intolerance and misogyny to future imams”.  You’ll notice the most important question was not asked in this Daily Mail article, and that is: who funds these madrassas? Unsurprisingly, the Saudi Kingdom, but surprisingly it is the UK government itself.

The main driving force for Muslims to send their children to madrassas for girls, is to keep them separate from boys entirely, and for the boys, it is to have them learn the Koran and the Sharia, which is taught as being above secular law.

The report claims preachers emerging from some of the dozens of Darul Uloom madrasas scattered across Britain have views as extreme as those held by radical clerics who move to the UK from Islamic countries – and may spread them to worshippers.

The children are indoctrinated in Saudi / Wahhabi ideology, which is true orthodox Islam.

It espouses the literal following of the Koran and is used by the hardline Islamic movement Deobandism, whose training schools produced the Taliban in Pakistanand Afghanistan.

The ban on music is similar to the one imposed by Islamic State, which carried out public floggings on those who broke the rule.

These kids are not being prepared to become functioning members of the larger community. They rarely keep to the state syllabus.

Four years ago, it was investigated by Ofsted after leaflets stating that music and dancing were ‘acts of the devil’ were found on its premises. The school, which has around 175 pupils, was also exposed by a Channel 4 investigation in 2011 that found pupils being taught to hate Jews, Christians and Hindus.

And as they are taught from the Koran and Hadiths, it follows that they will learn to hate the “Jews, Christians and Hindus”, and other infidels.

Personally I have no problem with faith schools, I’d rather my kids had gone to a regular state school as I had done in London, but that became untenable for them, as the Islamic anti-Semitism was continuous and often violent, and generally Leftist teachers are not supportive. They convey being anti-Israel when they beat you up, so it is tolerated. Unlike Muslim schools, Jewish and Catholic schools are not additionally funded by another country.

One thought on “The Koran does command the killing of infidels. Fact.”