Amazing stuff. Juncker, a demented alcoholic at the helm of the EUSSR, calls tens of millions of Europeans stupid because they reject being ruled by communist apparatchiks from Brussels, who want to replace them with a Mohammedan proletariat. “These populist, nationalists, stupid nationalists, they are in love with their own countries,” Juncker told CNN in his Brussels office.

Brussels (CNN)European Commission President Jean-Claude Juncker has lashed out at “stupid nationalists” on the eve of European elections in which euroskeptic politicians are expected to make gains in the European Parliament.

In an interview with CNN on Wednesday, the outgoing president said he was only too aware of the threat that nationalist politicians pose to European solidarity, which Juncker called the “main objective of the EU.”
.
Some polls project that populists may become the most powerful group in the parliament following this week’s elections in all 28 EU nations, resulting in a lasting impact on the future of the bloc and the continent at large. “These populist, nationalists, stupid nationalists, they are in love with their own countries,” Juncker told CNN in his Brussels office.
.
“They don’t like those coming from far away, I like those coming from far away … we have to act in solidarity with those who are in a worse situation than we are in,” he said. 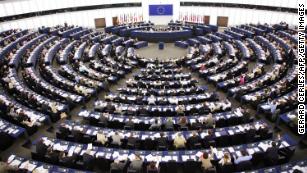 Everything you need to know about the European elections
When asked why he thought that anti-EU forces were more successful in mobilizing their base than pro-Europeans, Juncker replied: “It’s always easier to mobilize negative forces than to mobilize positive forces.”
.
Juncker said he saw a glimmer of hope in what has happened since the Britain’s decision to leave the EU, back in 2016. “Since Brexit … the number of those in favor of the European Union is increasing because people are watching what is happening and they are seeing that leaving the European Union is not as easy as they were told.”
The former prime minister of Luxembourg, who has served as European Commission President since 2014, said he remained sad at the UK’s decision to leave the EU, but now wants to see the Brexit process come to an end: “We have to stop this process because it’s harming the general atmosphere in Europe. It’s harming growth perspectives worldwide.”
.
Juncker said he believed that the best way to bring the Brexit process to an end was not a second referendum, but for Britain to agree to the Brexit deal that Prime Minister Theresa May has agreed with the EU.
.
“I would like to say yes to a second referendum, but the result might not be any different. We are observers in a British stadium — it’s up for them to decide,” Juncker said, when asked about May’s announcement on Tuesday that lawmakers could vote on holding a second public Brexit vote.
.
Juncker believes the Brexit uncertainty is harming not only the EU, but also the UK itself. “I hope they will agree among themselves, and they will leave (the EU) by the end of October … I think it’s their patriotic duty to get an agreement,” he told CNN. 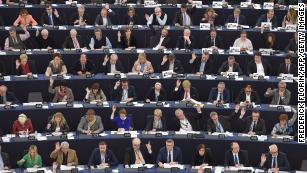 What does the European Parliament actually do? One clue lies in your phone bill
.
Juncker has been left frustrated by the political maneuvering in London, and suggested that another delay to the Brexit deadline — currently October 31 — could be on the cards.
.
“I am getting fed up because we are (just) waiting for the next extension,” he said, before bemoaning the never-ending talk in Britain of replacing May as Prime Minister.
.
“What I don’t like in the British debate is it seems more important to replace the Prime Minister than to find an agreement among themselves,” he said, adding that for the EU, it’s not about the “identity of the next Prime Minister, it’s about the Withdrawal Agreement.”
.
He talked admiringly about the determination of May, whose future was being furiously debated in Westminster as Juncker sat to talk with CNN on Wednesday.
.
“This is a woman who knows how to do things but she is unable to succeed in doing things,” he said. “I like her very much, she is a tough person.”
.
While this might come as a surprise after the fractured Brexit negotiations between London and Brussels, Juncker said he doesn’t operate in the business of hate: “Many people hate me, but I don’t hate anybody. If you hate someone you cannot work with them.”
Even more surprisingly, that quote was in reference to the outspoken Brexit campaigner, Nigel Farage, with whom Juncker said he has a “good relationship.”
.
He also claimed to have a good relationship with US President Donald Trump. “He says I am his friend, so I have to say I am his friend … And he publicly said that he loves me. Whoever made a declaration of that kind other than Donald?”
.
Juncker’s ability to work with others might come in use when euroskeptics take up their seats in the European Parliament in the coming months, though he hopes that his vision for a Europe of values becomes attractive once again to a younger generation of voters.
.
When asked what the greatest thing about the EU was, he replied simply: “One word, peace. And when it comes to peace we have to do it together with the US.”