CNN Fact Checks Dem Rep. Rashida Tlaib’s Comments On Israel John King: Tlaib “ignored the fact that Palestinian leaders at the time allied themselves with Hitler and that total war is how the Arab world reacted to the declaration of Israeli independence.”

No. Trashida didn’t ignore that. She, like most of her ilk, have a habit of gaslighting everyone to concoct their own revisionist history.

The  Arab opposition to Jews entering British Palestine resulted in the British restricting refugees from Hitler, and the leader of the Palestinian Arabs met directly with Hitler to suggest a Final Solution for Jews in the Middle East. 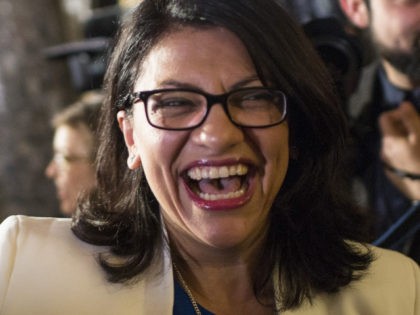 Rep. Rashida Tlaib, D-Mich., has made yet another shocking and historically ignorant claim: That thinking about the Holocaust gives her a “calming feeling” because her Palestinian ancestors provided a “safe haven” for Jewish victims of the tragedy.

Tlaib, a close ally of Rep. Ilhan Omar, D-Minn., who is no stranger to anti-Semitic controversies herself, made the latest statement on a podcast called “Skullduggery” in an episode titled “From Rashida with Love.”

“There’s always kind of a calming feeling I tell folks when I think of the Holocaust, and the tragedy of the Holocaust, and the fact that it was my ancestors — Palestinians — who lost their land and some lost their lives, their livelihood, their human dignity, their existence in many ways, have been wiped out, and some people’s passports,” Tlaib said just after the 28 minute mark. “And just all of it was in the name of trying to create a safe haven for Jews, post-the Holocaust, post-the tragedy and the horrific persecution of Jews across the world at that time. And I love the fact that it was my ancestors that provided that, right, in many ways. But they did it in a way that took their human dignity away and it was forced on them.”

There are so many historical inaccuracies in one statement that it’s difficult to even know where to start. But to highlight a few:

— The Jewish presence in the area currently known as Israel dates back thousands of years, and the modern migration of Jews back there pre-dated the Holocaust by many decades, starting with the migration of Jews from Yemen in 1881.

— With the Balfour Declaration of 1917, the British government supported the establishment of a Jewish state in the area, an idea rejected by Arabs.

— In 1937, the British Peel Commission proposed a two-state solution to Jews and Arabs, which the Arabs once again rejected because they could not accept any Jewish presence in the region.

— During World War II, the Palestinian leader at the time, the Grand Mufti of Jerusalem Muhammad Amin al-Husayni, met with Adolf Hitler and allied with the Nazis. As the U.S. Holocaust Memorial Museum recounts, “al-Husayni collaborated with the German and Italian governments by broadcasting pro-Axis, anti-British, and anti-Jewish propaganda via radio to the Arab world; inciting violence against Jews and the British authorities in the Middle East; and recruiting young men of Islamic faith for service in German military, Waffen-SS , and auxiliary units. In turn, the Germans and the Italians used al-Husayni as a tool to inspire support and collaboration among Muslim residents of regions under Axis control and to incite anti-Allied violence and rebellion among Muslims residing beyond the reach of German arms.”

— After World War II, when the Jewish people declared the state of Israel, their official proclamation said, “We appeal – in the very midst of the onslaught launched against us now for months – to the Arab inhabitants of the State of Israel to preserve peace and participate in the upbuilding of the State on the basis of full and equal citizenship and due representation in all its provisional and permanent institutions.” Instead of choosing to live peacefully, however, Arab leaders encouraged Arabs to flee Israel, and the next day, the young nation was invaded by Egypt, Syria, Jordan, Lebanon, and Iraq.

— The terrorist group the Palestine Liberation Organization was founded in 1964, three years before Israel occupied the West Bank in the Six Day War, territories that we’re now led to believe is at the heart of the conflict.

It should be noted that she was making this claim in the context of arguing for a one-state solution, the goal of which has always been for Arabs to overwhelm the Jewish population, and then force them as a minority to be governed by the people who are currently launching rockets at them.