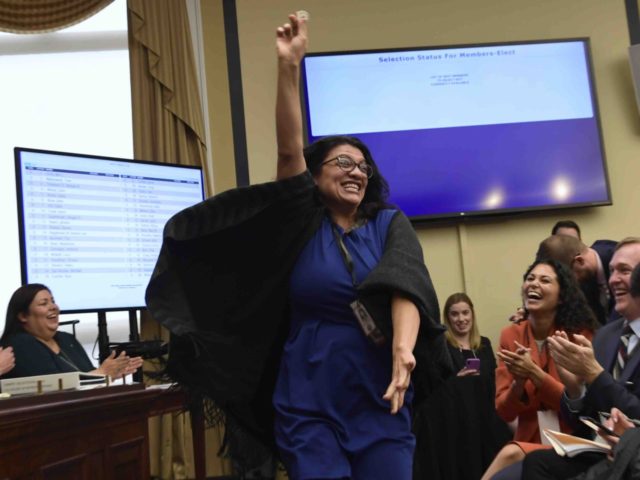 Rep. Rashida Tlaib (D-MI) tweeted an attack on Israel on Sunday even as Palestinian terrorists fired hundreds of rockets at Israeli civilians, bringing the death toll to four — including, ironically, a Muslim Arab citizen of Israel.

Tlaib was responding to, and agreeing with, anti-Israel activist Yousef Munayyer, who had criticized a New York Times headline that read: “Gaza Militants Fire 250 Rockets, and Israel Responds with Airstrikes.” (The Times evidently prefers to avoid the word “terrorists” when dealing with Palestinians who murder Israelis.) That was unacceptable to Munayyer, who complained that Israel had started the violence by shooting “unarmed Palestinian protesters in Gaza.”

Still, for Tlaib, describing the fact that Palestinians had sparked the present conflict meant “dehumanizing” them: “When will the world stop dehumanizing our Palestinian people who just want to be free? Headlines like this & framing it in this way just feeds into the continued lack of responsibility on Israel who unjustly oppress & target Palestinian children and families,” she tweeted. She concluded with “#FreePalestine” — a slogan usually used in connection with the destruction of Israel, an ambition that Tlaib shareswith Hamas and other Palestinian radicals.

The Palestinian terror groups firing rockets at Israel evidently hoped that a massive barrage of projectiles would overwhelm Israel’s Iron Dome anti-missile system. Four Israeli civilians were, in fact, killed by rockets — including a Muslim Arab Israeli who was “was killed after he was critically injured in his chest by shrapnel from a direct strike on a factory in Ashkelon,” according to the Jerusalem Post. Israel has struck Palestinian terrorist targets in response.

Unlike Palestinian terrorists, who have a long history of both targeting civilians in Israel and hiding behind civilians in Gaza, the Israel Defense Forces (IDF) target terrorists and try to avoid civilian casualties on both sides of the conflict.

Tlaib, the first Palestinian-American woman in Congress, has been celebrated by other Democrats — including former president Barack Obama, who told Tlaib personally, “I’m proud of you,” during a meeting with freshman Democrats.

Tlaib also has close ties to other Palestinian radicals, including Palestinian activist Maher Abdel-qader, a fundraiser and campaigner for Tlaib in 2018 who spread antisemitic conspiracy theories online, including Holocaust denial. Tlaib has also used antisemitic language to describe American politicians who support Israel, and once reportedly wrotean op-ed for antisemite Nation of Islam leader Louis Farrakhan’s website, among numerous other radical connections.

Joel B. Pollak is Senior Editor-at-Large at Breitbart News. He is a winner of the 2018 Robert Novak Journalism Alumni Fellowship. He is also the co-author of How Trump Won: The Inside Story of a Revolution, which is available from Regnery. Follow him on Twitter at @joelpollak.