The Vatican has sent a special message to all the world’s Muslims, wishing them “a peaceful and fruitful celebration of Ramadan.”

The month of Ramadan, which began this year on May 5, is “a month for strengthening the spiritual bonds we share in Muslim-Christian friendship,” reads the message from the Vatican’s office of interreligious dialogue bearing the title “Christians and Muslims: Promoting Universal Fraternity.”

“We Muslims and Christians are called to open ourselves to others, knowing and recognizing them as brothers and sisters,” the text states. “In this way, we can tear down walls raised out of fear and ignorance and seek together to build bridges of friendship that are fundamental for the good of all humanity.” 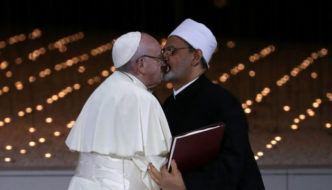 Vatican issues a happy Ramadan to all “Muslim brothers and sisters”

“We thus cultivate in our families and in our political, civil and religious institutions, a new way of life where violence is rejected, and the human person respected,” reads the message, which bears the signature of Bishop Miguel Ángel Ayuso Guixot, secretary of the Pontifical Council for Interreligious Dialogue.

Our religions invite us to “remain rooted in the values of peace; to defend the values of mutual understanding, human fraternity and harmonious coexistence; to re-establish wisdom, justice and love,” the text says, citing a joint declaration signed by Pope Francis and the Grand Imam Ahmed a-Tayyeb in Abu Dhabi this past February.

That same declaration brought down heavy criticism on the pope particularly due to the assertion that the plurality and diversity of religions “are willed by God in His wisdom,” just as God wills a plurality of colors, sexes, races, and languages.

A number of Catholic theologians raised objections to the statement, insisting that it seemed to suggest that either God actively wills error, or that all religions are equally valid paths to God. The existence of a variety of colors, races, and languages in humanity is very different from a variety of contradictory claims about God’s identity and way of acting, they said.

In early April, Francis walked back the earlier statement, clarifying that in reality God only permits the existence of many religions without actively willing it.

The Vatican’s Ramadan message steers clear of such theological swampland.

“We are encouraged, therefore, to continue advancing the culture of dialogue as a means of cooperation and as a method of growing in knowledge of one another,” the message says.

The text also reaffirms the importance of religious liberty and the right of all people to worship God in freedom.

“In order to respect diversity, dialogue must seek to promote every person’s right to life, to physical integrity, and to fundamental freedoms, such as freedom of conscience, of thought, of expression and of religion,” it states. “This includes the freedom to live according to one’s beliefs in both the private and public spheres. In this way, Christians and Muslims – as brothers and sisters – can work together for the common good.”