The Guardian on Free Speech: ‘Some Debates Should Be Shut Down’

The UK-based Guardian newspaper explains this week that silencing unpopular opinions is not a violation of free speech because “some debates should be shut down.”

You are free to hold and express any opinions you want, as long as you agree with them. They’re worse than religious fanatics. They are adamant that anyone who disagrees with their views should be silenced.

YouTube REMOVED this video – will they begin rejecting traffic to @MailOnline next? Where do we draw the line on what journalism is allowed and isn't allowed? – Undercover video shows Google exec warning over 'next Trump situation' https://t.co/Q4Dm74z4Ge

Secret footage shows Google’s Head of Responsible Innovation, Jen Gennai, describing how the tech giant has stepped up to define ‘what’s fair and equitable’ and implement that, at a dinner meeting in San Francisco in May

YouTube took us down for exposing the most powerful company in the history of the world. “Without fear or favor?” Most journalists are afraid or on the take so they’re rendered mute. But people are uploading clips en masse. Here’s Google exec on her contempt of Congress and 2020. pic.twitter.com/q6E67CmbKH

A senior Google executive has been caught on an undercover video appearing to suggest the company is trying to stop ‘the next Trump situation’ in the 2020 presidential election.

A company insider provided Project Veritas with documents outlining Google’s explanation of ‘algorithmic unfairness,’ which appeared to expose a liberal bent at the online giant.

A document leaked by the alleged insider contained language about addressing ‘unjust or prejudicial treatment,’ saying that even when search results are factually accurate, ‘it may be desirable to consider how we might help society reach a more fair and equitable state, via either product intervention or broader corporate social responsibility efforts.’

After the publication of the footage, which has since been removed from YouTube, Gennai said she had used ‘imprecise language’ during a ‘casual chat’ and said she had been invited to the meeting at a San Francisco restaurant by people claiming to be from a ‘mentoring program for young women of color.’

But the clip, part of Project Veritas’ investigation into Silicon Valley, provided fodder to conservatives who have long accused Google of using its search results to shape people’s political views.

DailyMail.com reached out to Google seeking authentication of and comment on the documents, as well a response to the video of Gennai, and was referred to Gennai’s personal response in a Medium post.

The spokesperson said: ‘We have strong privacy guidelines in place, including the ability to file a complaint if someone feels their privacy has been violated. When complaints are received, we may also provide the uploader a chance to remove or edit private information in their video.’ 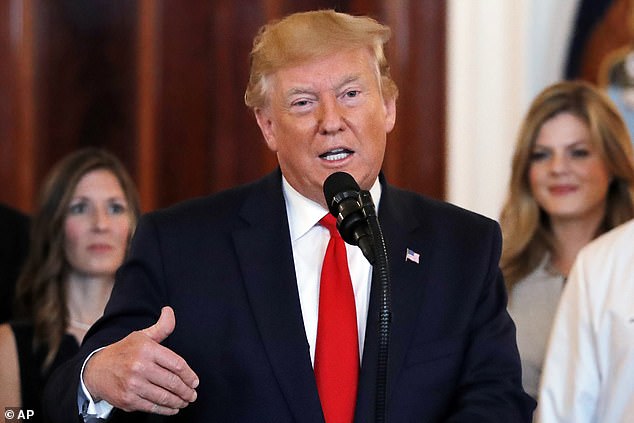 In the footage, Gennai appears to suggest Google was training its algorithms to prevent a repeat of the 2016 election, though she didn’t specifically say exactly what the company was trying to stop in the video posted by Project Veritas.

‘We’re also training our algorithms, like, if 2016 happened again, would we have, would the outcome be different?’ she asked in the video.

Discussing the size Google has grown to, Gennai can be heard saying: ‘Elizabeth Warren is saying we should break up Google. And like, I love her but she’s very misguided, like that will not make it better it will make it worse, because all these smaller companies who don’t have the same resources that we do will be charged with preventing the next Trump situation, it’s like a small company cannot do that.’

On Monday, Gennai addressed the video and elaborated on what she meant, writing: ‘Project Veritas has edited the video to make it seem that I am a powerful executive who was confirming that Google is working to alter the 2020 election. On both counts, this is absolute, unadulterated nonsense, of course.

‘In a casual restaurant setting, I was explaining how Google’s Trust and Safety team (a team I used to work on) is working to help prevent the types of online foreign interference that happened in 2016. Google has been very public about the work that our teams have done since 2016 on this, so it’s hardly a revelation.’

Gennai downplayed her power within the company and quoted Google’s CEO Sundar Pichai as saying, ‘We do not bias our products to favor any political agenda,’ and added of Pichai, ‘He’s somewhat more powerful and authoritative than me.’

However, the insider also reportedly told Project Veritas that Google, as a whole, ‘is bent on never letting somebody like Donald Trump come to power again.’

Gennai denied the company has a political bent, writing: ‘Google has repeatedly been clear that it works to be a trustworthy source of information, without regard to political viewpoint. In fact, Google has no notion of political ideology in its rankings. And everything I have seen backs this up.’

But according to what was said to be a leaked internal Google communication published by Project Veritas on Tuesday, flagging ‘far-right content’ was at least considered among a private Google group called ‘transparency-and-ethics.’

A message excerpted from a larger thread and appearing to be from an employee named Liam Hopkins read: ‘Today it is often 1 or 2 steps to nazis, if we understand that PragerU [Prager University], Jordan Peterson, Ben Shapiro et al are nazis using the dog whistles you mention in step 1. I can receive these recommendations regardless of the content of what I’m looking at, and I have recorded thousands of internet users sharing the same experience.

‘I don’t think correctly identifying far-right content is beyond our capabilities. But if it is, why not go with Meredith’s suggestion of disabling the suggestion feature? This could be a significant leap in terms of user trust.’

It was not clear from the limited portion of the discussion shown whether this was a proposal to disable the suggestion feature for all content, or specifically content that would be designated ‘far-right content.’ It also wasn’t clear what Google platform the message was referring to.

The insider claims the tech giant uses Machine Learning Fairness to address what it refers to as ‘algorithmic unfairness’ and steer the political stories people read.

According to a document published by Project Veritas, Google has conceptualized ‘algorithmic unfairness’ as ‘unjust or prejudicial treatment of people that is related to sensitive characteristics such as race, income, sexual orientation, or gender, through algorithmic systems or algorithmically aided decision-making.’

One thought on “Censorship Scandals – “a small company cannot do that””