Within the space of two days, Jihad Watch has been hit by both CNN and the New York Times. I’m both amazed and amused that these media giants are so deeply threatened by this modest website, but the fact that they are is yet another indication that the establishment media sees one of its primary duties to be shielding Islam (not Christianity, Judaism, Hinduism, Buddhism, or any other faith) from criticism, and doing everything it can to ensure that no one thinks that the crimes committed in the name of Islam and in accord with its teachings have anything to do with the religion itself.

CNN, reporting here on research done by a couple of far-Left think tanks and the Antifa factory that is Stanford University, claims that Jihad Watch is “known to spread disinformation or content critical of Islam.” Of course, they give no examples, because they can’t. We don’t spread disinformation: everything we say is documented and sourced. When a news item proves to be inaccurate, we take it down, as do the New York Times and CNN themselves. But what is chilling here, aside from CNN’s disinformation, is that it is criticizing us for publishing “content critical of Islam.” Is it illegal now to criticize Islam? It certainly has become something that few dare to do, as vilification, demonization, and ostracism are heaped upon all Islamocritics. But is CNN exercised about content critical of Christianity or any other religion? Of course not. That kind of content it would celebrate as free speech.

Nations belonging to the Organization of Islamic Cooperation (OIC) and other governments adhering to Shariah law across the world are ramping up their new campaign with the United Nations to prohibit all speech that Muslims consider offensive.

The fact that CNN — as well as the Leftist propagandists who carried out this “study” — blandly report that “content critical of Islam” is something reprehensible and to be stopped is an indication of how much the establishment media and political elites have already accepted the Sharia notion that Islam must not be criticized. This submission began nearly fifteen years ago, when newspapers all over the U.S. and Europe declined to reprint the Muhammad cartoons over which Muslims were rioting worldwide; the “journalists” who hailed “Piss Christ” and a dung-encrusted painting of the Virgin Mary suddenly discovered “respect” for religion.

Now, fifteen years later, the submission is nearly total. Even a little site like this one, posting accurate information about jihad violence, Sharia oppression, and Islamic doctrine is being targeted, and may soon be shut down. Totalitarian regimes have destroyed the freedom of speech before, and yes, it could happen here. However, totalitarian regimes also find that they can never manage to extinguish completely the desire for freedom that exists in every human heart. Official lies have prevailed before. But they never prevail in the long run.

Oh, and speaking of disinformation: the actual report about which CNN is writing states on page one: “Jihad Watch is run by Richard Spencer.” Are they really so careless as not to be able to distinguish between the names Richard and Robert, or are they deliberately trying to associate Jihad Watch with the neo-Nazi Richard Spencer in order to add weight to their defamation? Either way, this report is hardly a trustworthy source. 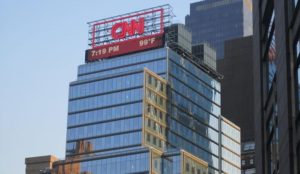 New York (CNN Business)The fringe social media site Gab is a well-known home for far-right content, but a new study looks at how Islamophobic posts in particular pull from across the web and more traditional social media.

Gab, which promotes itself as an alternative platform that does not restrict its users’ speech — in contrast to mainstream platforms like Facebook, Twitter, and YouTube, which can ban users for hateful content — gained attention in the wake of the Pittsburgh synagogue shooting, after it was revealed the suspect had posted anti-Semitic content to the platform. (Interviewed by CNN after the Pittsburgh shooting, Gab CEO Andrew Torba said, “It disgusted me,” adding that he was “horrified to find out that this alleged terrorist was on our site.”)

The Anti-Defamation League has noted that Gab is often a home for users who have been banned from Twitter for their conduct; the site is among a set of fringe forums for political discussion known for inflammatory and far-right user posts.

Researchers from the German Marshall Fund, the Institute for the Future, Stanford University, and social media-mapping firm Graphika, found that of the more than 10 million posts on Gab leading up to the 2018 midterms (from July to October 2018), more than 188,000 contained keywords related to Islam or Muslim-American political candidates (indicating fewer than 2% of Gab posts contained Islam-related keywords).

They found that 27% of those posts involved derogatory terms and that even posts that didn’t use derogatory terms were “often defamatory and demonizing.” Researchers also found sites such as jihadwatch.org and others known to spread disinformation or content critical of Islam in the dataset.

The German Marshall Fund offered CNN an opportunity to review the study before its publication.

“There is a difference between condoning content and allowing content. We do not condone Islamophobia,” a Gab representative said, when asked for comment about Islamophobic content on the platform by CNN. “However, as long as any content is protected by the First Amendment, it will be allowed on Gab.”…

It’s only a matter of time before GAB caves in and submits.