“The honour of Islam lies in INSULTING kufr and kafirs. One who respects the kafirs dishonours the Muslims… The REAL PURPOSE of levying jiziya on them is to HUMILIATE them to such an extent that they may not be able to dress well and to live in grandeur. They should constantly remain terrified and trembling. It is intended to hold them under CONTEMPT and to uphold the honour and might of Islam.” 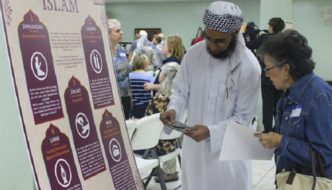 Ask about zakat and jizyah at Open-Mosque events

A friend called to tell me about an Open-Mosque evening he recently attended. Yes, he said, it was as predicted: “Earnest, ostentatiously sincere ask-us-anything faces. Thirty or so unwary Infidels. The main speaker began by telling us that Islam means ‘peace’, then quoted the Pope  who had said that  ‘Authentic Islam and the proper reading of the Koran are opposed to every form of violence’”. Qur’an 5:32 was presented in its abridged form: “If any one slew a person… it would be as if he slew a whole people; and if any one saved a life, it would be as if he saved the life of a whole people”. Qur’an 2:256 was repeated several times: “There is no compulsion in religion.”

Someone in the audience asked about the Jizyah and the speaker took it in stride. He said, not missing a beat, that the Jizyah was what non-Muslims paid to the state, instead of the Zakat that Muslims had to pay.  Since non-Muslims were receiving protection (from whom was not spelled out) and did not have to serve in the army, it was only just that they be asked to pay their fair share — hence the  Jizyah. In fact, he added, the Zakat was actually more burdensome than the Jizyah. No one sought to take issue with the speaker; the audience seemed satisfied with that preposterous claim.

This leads me to believe that it might be useful to go over both Jizyah and Zakat, to see how they differ, and to fully appreciate the breathtaking mendacity of the speaker. The main text I rely on is A. Ben She-mesh, Taxation in Islam, Vol. ll,  Qudama b. Ja’far’s Kitab al-Kharaj. Leiden, E. J. Brill, 1965, p. 14.

Qudama emphases the voluntary nature of Zakat at the beginning of his chapter 13. He states that Muslims are trusted with the declaration of what is due from them, in contradistinction to other taxes which are compulsory and able to pursue. The Saudi law governing this religious tax is to follow the old precepts of which the tax rate for the Zakat is fixed in accordance with the persons from whom it is collected. A Muslim merchant from a foreign country is taxed at a rate of 10 per cent. A merchant from an allied country pays 5 per cent, and a Muslim from the country where the tax is being collected pays 2.5 per cent.

“There is a desire to equate Zakat with Jizyah to emphasize the fairness of the Islamic fiscal system. The Muslims pay Zakat and the non-Muslims Jizyah. But the analogy is fallacious. The rate of Zakat tax is as low as 2.5 per cent and that on the apparent [visible] property only. All kinds of concessions for payment of the Zakat exist with regard to the taxable minimum. In its collection no force is applied because force vitiates its character.

“On the other hand, the rate of Jizyah is very high for the non-Muslims: 48, 24, and 12 tankahs [one of the main historical currencies in Asia] for the rich, the middling, and the poor, whatever the currency and whichever the country. Besides, what is central to Jizyah is always the humiliation of the Infidel, particularly at the time of collection. What is central in Zakat is that it is voluntary; at least it should not be collected by force. In India Zakat ceased to be a religious tax imposed only on the Muslims.  Zakat was levied in the shape of customs duties on merchandise and grazing fees on all milk-producing animals or those which went to pasture, and was realized both from Muslims and non-Muslims. According to Muslim law, ‘import duties for Muslims were 5 per cent and for non-Muslims 10 per  cent of the community.  Abu Hanifa, whose  Sunni school of jurisprudence prevailed in India, would tax the merchandise of the Dhimmis as imposts at double the Zakat fixed for Muslims. Jizyah was calculated so as to inflict real financial pain on Infidels, and had to be paid no matter how poor they might be. This was part of their punishment for being Infidels, to pay for their own protection (protection from Muslims themselves). Zakat, on the other hand, was never meant to be a financial burden on Muslims. Normally it would be only 2.5% of a Muslim’s wealth, and imposed only if he possessed a certain minimum wealth, or nisab.

An important part of the Jizyah payment, which is never mentioned by Muslim apologists (and certainly not at any Open-Mosque event) was the deliberate humiliation, while making the payment, of the dhimmi. The Jizyah was not, as most Infidels would understandably assume, simply handed over to Muslim collectors. There had to be humiliation. Surah 9:29 states that the people of the book (Christians and Jews) are to pay the Jizyah in a state where they are saaghiruun. This word, according to the Arabic experts, means “humiliation or disgrace.” (See Tafsir Al-Tabari, Volume 12, page 96; Al-Qaradihi, Kitab Al-‘Ayn Lil-Khaleel, Volume 4, page 372).

This requirement that dhimmis should be humiliated during the payment of the Jizyah needs to be well-understood, and brought up at Ask-A-Muslim-Anything events:

The celebrated Qur’anic commentator Ibn Kathir’s (14th century) notes of Surah 9.29 that dhimmis are miserable, humiliated, degraded, and disgraced, and cannot be honored  or elevated, and that — as an example — Muhammad demanded that Jews and Christians be forced into the narrowest alley if met on the road. In the same spirit, they must be humiliated while giving the Jizyah.

The Sunni manual Reliance of the Traveller, law (o9.8 p. 602, 603) requires certain non-Muslims to be asked to either convert to Islam or to pay the poll tax (Jizyah)  while being humbled.  It states the requirement that this tax continue to be paid until Jesus returns to earth and abolishes all religions except Islam. In other words, payment of the Jizyah continues until the End of Days.

Many Muslim sages have described the way to extract the Jizyah with much humiliation and blows, so as to remind the non-Muslims of the Muslim generosity and tolerance in not beheading them.

For example, the theologian Al-Ghazali (11th century), whom  some consider the greatest Muslim after Mohammad, describes a symbolic decapitation of the dhimmi:

“On offering up the Jizyah, the dhimmi must hang his head while the official takes hold of his beard and hits (the dhimmi) on the protruberant bone beneath his ear.” (Kitabal-Wagiz fi Fiqh Madhab al-Imam al-safii).

Or he may strike the dhimmi on both cheeks, or give him two blows in the back of the neck.

The Hedaya (the Hanafi manual of Islamic law) notes that the Jizyah (capitation tax) is inflicted upon Infidels for their obstinacy in infidelity and must be extracted from them in a mortifying and humiliating manner, including seizing the infidel by the throat and shaking him.  It is imposed in lieu of actual destruction. This punishment for infidelity is no longer enforced only if the person converts to Islam or dies.

The dhimmi taxpayers also had to feed and lodge the tax collectors, soldiers, and others, and taxes were extracted using punishments and torture. Failure to pay  the Jizyah,  or to pay enough,  had devastating results. These included branding dhimmis on their hands and forehead, mutilation, amputation of limbs, gouging out of eyes, slaughter, impaling, flagellation, hanging, being crushed under presses or thrown into freezing lakes…etc. (see Bat Ye’or, The Decline of Eastern Christianity Under Islam, p. 66, 67, 68, 71).  The degree of sadism varied but the poll tax had to be paid, or people were forced to flee, or were expelled for failing to convert, or faced death.

Sir Jadunath Sarkar (the preeminent historian of Mughal India) wrote in 1920 of the multiple abuses suffered by the Hindus. The Qadi Mughis-ud-din declared regarding Hindus that when paying the Jizyah,  “If the officer throws dirt into their mouths, they must without reluctance open their mouths wide to receive it “ and suggested such humiliation was demanded by Allah and Mohammad, for it glorified Islam.  Hindus were “lucky” under Hanifi law because other schools of Sunni jurisprudence allowed only two options: death or conversion to Islam. Aside from being beaten about the head, or having dirt thrown into their mouths, cases are recorded where Muslims spit into the mouth of the Hindi dhimmi as he presented his Jizyah..

That should be evidence enough of the Muslim practice of humiliating the dhimmis as they preferred their Jizyah payments. Blows on the face, and on the back of the neck or head, shaking them furiously, throwing dirt or spitting into their  mouths — these are among the recorded humiliations endured by Hindus — no wonder that many converted to Islam.

So when you next attend an Open-Mosque Event, come prepared to ask about the relative onerousness of the Jizyah as compared to the Zakat, about the “protection” the Jizyah supposedly provided from attacks by Muslims themselves, and especially, about the deliberate humiliation of the dhimmi that was such an important accompaniment to the Jizyah payment. it will discombobulate your hosts, who were expecting smooth sailing, but instead ran into you, a one-man perfect storm. 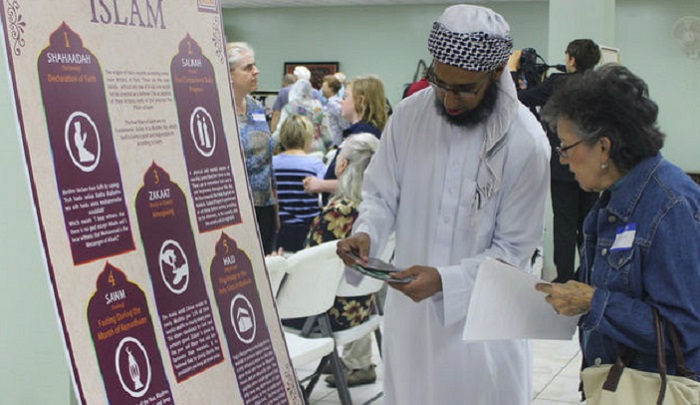