Two police officers have been injured as a result of an explosion that rocked the Tunisian capital of Tunis on Thursday in the proximity of the French embassy, Reuters reported citing eyewitnesses.

Once again Muslims murder Christians, and once again the world yawns and turns away. If there were a remote degree of sanity in the public discourse, governments and human rights organizations would be holding conferences on the Muslim persecution of Christians, instead of on “Islamophobia,” and working on realistic ways to protect Christians in vulnerable areas.

Moslems reject the “aggressive” promotion of homosexuality in the classroom. The UK’s education secretary Damian Hinds has said that all children from the age of four will have mandatory lessons on same-sex relationships in keeping with the “diversity of our society”.

France: ‘Hate speech is no longer considered part of freedom of speech, it’s now on the same level as terrorism.’

This heralds the end of France as a free society.

“’It is a strong signal in terms of regulation,’ said Sonia Cisse, a counsel at law firm Linklaters, adding that it was a world first. ‘Hate speech is no longer considered part of freedom of speech, it’s now on the same level as terrorism.’”

This heralds the end of France as a free society and, if this spreads to other nations, as it likely will, the imminent death of other free societies in the West. This is because the banning of “hate speech” amounts in reality to the classification of anything those in power dislike as “hate speech,” and its banning.

“Hate speech” is not remotely in the same category as terrorism; the most obvious difference is that hateful or insulting speech does not result in the death of anyone. “Hate speech” is a subjective judgment. What is actually designated as “hate speech” depends on what the person doing the judging believes is offensive and hateful. I think opposing jihad terror and Sharia oppression of women and others is what everyone should do if he or she believes in the dignity of every human person and a free, pluralistic society in which people of differing beliefs and ideologies live together with mutual respect. But powerful bodies such as the Organization of Islamic Cooperation and the Southern Poverty Law Center have long classified such opposition as “hate speech.” And now Facebook is paving the way for those who engage in this so-called hate speech to be prosecuted.

The very concept of “hate speech” is, in reality, a tool of the powerful, used to silence the powerless. The political and media elites have decided, for whatever reason, that opposing jihad terror and speaking honestly about its ideological roots is “hate speech.” And so they will snuff it out, and we are well on the way now to the prosecution, imprisonment, and worse of those who engage in it. But this is not something that will save free societies by removing those who supposedly are the causes of strife. It will be the end of free societies, and the beginning of another era of totalitarian darkness and oppression. 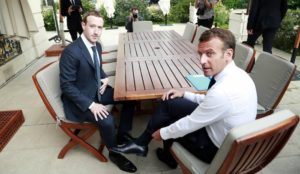 “Exclusive: In a world first, Facebook to give data on hate speech suspects to French courts,” by Mathieu Rosemain, Reuters, June 25, 2019:

O, whose father is South Korean, is one of French President Emmanuel Macron’s earliest followers, and has been influential in shaping the president’s thinking on Big Tech as an advisor at the Elysee palace in the first two years of Macron’s presidency.

The decision by the world’s biggest social media network comes after successive meetings between Zuckerberg and Macron, who wants to take a leading role globally on the regulation of hate speech and the spread of false information online….

“It is a strong signal in terms of regulation,” said Sonia Cisse, a counsel at law firm Linklaters, adding that it was a world first. “Hate speech is no longer considered part of freedom of speech, it’s now on the same level as terrorism.”…