List of Racist Statements by Members of the ‘Squad’ (So Far)

President Donald Trump tweeted Tuesday that “I don’t have a Racist bone in my body!” and challenged his critics to “Get a list of the HORRIBLE things” that the four Democratic congresswomen of the so-called “Squad” have said.

It is worth noting that all four — Reps. Alexandria Ocasio-Cortez (D-NY), Ilhan Omar (D-MN), Rashida Tlaib (D-MI), and Ayanna Pressley (D-MA) are members of a group called the “Justice Democrats.” The group is specifically devoted to backing primary candidates against Democratic incumbents seen as being too moderate and too white.

Last November, the Justice Democrats launched a campaign called “#OurTime,” aimed at recruiting candidates to challenge “Democratic incumbents who are demographically and ideologically out-of-touch with their districts.”

From the start, the “Squad” devoted itself to an explicitly race-based political effort.

Then there are their statements.

From the start, “AOC” used race in her campaign for Congress. As Politico noted in 2018, she challenged incumbent Rep. Joe Crowley (D-NY), who is white, on “ideological, generational and racial grounds, arguing that the 10-term congressman was not in step with his majority-minority district and was too cozy with corporate donors.”

No civility to see here. Behar and her pathetic “show” of degenerate rats are beneath contempt.

AOC also has a record of controversial statements about Israel. She claimed, for example, that Israel had committed a “massacre” of Palestinian protesters at the border fence last year. The vast majority were actually members of Hamas, a terrorist organizations that was using the fake “protest” to launch infiltrations and violent attacks against Israel.

In recent weeks, AOC has shown even greater insensitivity to the Jewish community by comparing migrant facilities at the U.S.-Mexico border to “concentration camps.” Attorney Alan Dershowitz, a Democrat and Hillary Clinton supporter, called her claims a form of Holocaust denial. Despite criticism from the U.S. Holocaust Museum, Israel’s Yad Vashem, and others, AOC refused to apologize and rejected an invitation to visit actual concentration camp sites. 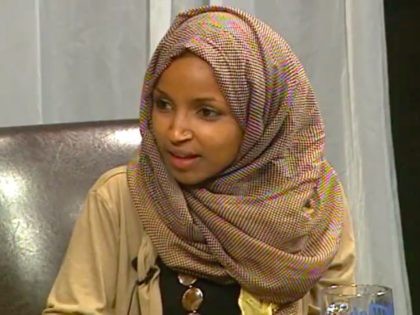 The Clip That Launched It All

Omar has a long history of anti-Israel statements that have included antisemitic themes, such as suggesting that Jews control the world. In 2012, she tweeted: “Israel has hypnotized the world, may Allah awaken the people and help them see the evil doings of Israel.” Local Jewish community leaders in Minnesota staged an intervention before she took up her seat in Congress — to no avail; she continued making offensive anti-Israel and antisemitic statements.

In February, Omar tweeted, “It’s all about the Benjamins baby,” suggesting (falsely) that a pro-Israel group, the American Israel Public Affairs Committee (AIPAC), bribed members of Congress to support Israel. The implication was that Jews were using money to control Congress. Omar apologized for that tweet, but went on, a few weeks later, to claim that pro-Israel members of Congress owed “allegiance to a foreign country.” The chair of the House Foreign Affairs Committee, a fellow Democrat, called her statement a “vile antisemitic slur,” but she refused to apologize.

In an effort to tamp down the controversy, House Democrats passed a resolution condemning antisemitism — but only among other forms of hatred, and without mentioning Omar specifically. After the resolution passed, Omar took a victory lap, claiming (falsely) that it marked the first time Congress had condemned anti-Muslim prejudice.

Tlaib believes that the State of Israel has no right to exist and should be dismantled — a stance that lost her the support of the far-left J Street organization, which likes to maintain the pretense of support for a two-state solution.
In January, Tlaib posted an antisemitic tweet, declaring that members of Congress who supported Israel “forgot what country they represent.” The American Jewish Committee accused her of using an antisemitic claim of “dual loyalty.”

In February, Tlaib called Housing and Urban Development official Lynne Patton, a black woman, a “prop” for appearing in the gallery during a hearing where members of Congress were debating whether Trump was racist.

In May, Tlaib made the bizarre statement that she felt “a calming feeling … when I think of the Holocaust.” She explained by making the false claim that Palestinians had offered Jews a “safe haven” from the Holocaust.

On Sunday, just hours after the president posted his congressional tweets, Pressley toldleft-wing bloggers at Netroots Nation: “We don’t need any more black faces that don’t want to be a black voice.” She appeared to assume that the only legitimate “black voice” was leftist; black Americans with other views were legitimate targets of racial attack.

Pressley’s bio on her official House of Representatives website — not a personal or campaign page — implies that a white person cannot represent her congressional district: “The Massachusetts 7th is the most diverse and most unequal district in the state, requiring a representative whose experiences are reflective of the people,” it says.

Joel B. Pollak is Senior Editor-at-Large at Breitbart News. He earned an A.B. in Social Studies and Environmental Science and Public Policy from Harvard. He is a winner of the 2018 Robert Novak Journalism Alumni Fellowship. He is also the co-author of How Trump Won: The Inside Story of a Revolution, which is available from Regnery. Follow him on Twitter at @joelpollak.