Iranian pilgrims to the holiest site in Islam in the Saudi city of Mecca have used their hajj to call for Israel’s destruction and decry the Jewish state and the United States as “polytheists.”

At a “disavowal of polytheists” ceremony held at Mount Arafat, a message from Iran’s Supreme Leader Ali Khamenei was read, and the crowd then chanted, “Death to America! Death to Israel!” according to a segment aired by Iran’s IRINN TV station on Saturday and translated by the Middle East Media Research Institute.

Today the islamic Eid al Adha – the “Festival of the Sacrifice” – starts.

This does not belong to our culture.

Our nations should all ban and outlaw this festival of animal cruelty and barbarism!

Goats, sheep and cows are slaughtered in streets in gory tradition as Muslims mark festival of Eid around the world 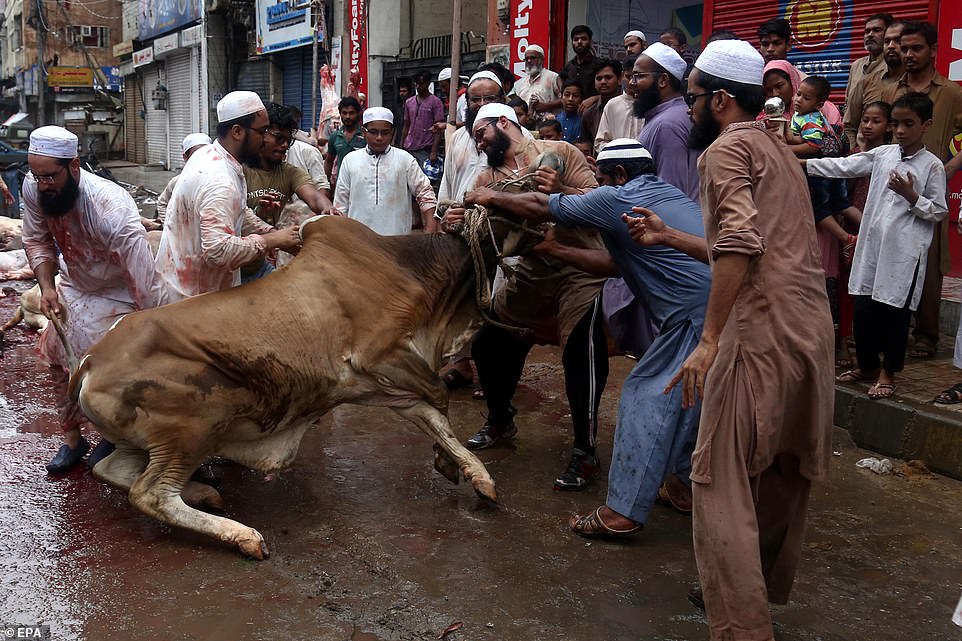 The pictures are horrific, as always.
.

Paki men prepare to sacrifice a cow during an Eid al-Adha celebration in Karachi. Muslims slaughter a sacrificial animal and split the meat into three parts, one for the family, one for friends and relatives, and one for the poor and needy. The act is done to honour the willingness of Ibrahim to sacrifice his son as an act of obedience to God’s command, as told in the Quran, but before he was able to sacrifice his son, God provided him with a sheep to kill instead

It’s not “Indian-administered Kashmir”. It’s India proper. Kashmir is part of India. Moslems claim the world. They already got Pakistan & Banglatrash. They tried to invade Assam where they’re being kicked out now. India must not give ground.

Eid under lockdown: Kashmir remains cut off during festival

Kashmiris queue at a government office to use phone amid week-long clampdown that has seen communication lines cut off.