What were these bitches thinking? What were they hoping to achieve by volunteering to do work that the Moslems of Morocco won’t do?

“They should be beheaded so that nobody can challenge our religion’s teachings.”

This is an example of how Islam creates an empire of fear by threatening dire punishments for perceived moral indiscretions, no matter how trivial. Then Islamic apologists denigrate the West for its immorality and libertinism, to which they contrast the supposed virtue of Islamic societies. But fear is not virtue. 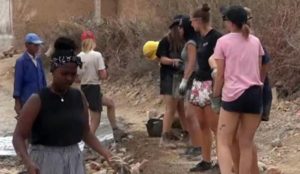 “Morocco: Belgian women in shorts must be ‘beheaded’,Islamist,” by Olga Piscitelli, ANSAmed, August 8, 2019 (thanks to The Religion of Peace):

(ANSAmed) – RABAT, AUGUST 8 – A group of young Belgian volunteer women has been targeted by Moroccan Islamists on social media because ”they work in shorts”. An elementary school teacher urged on social media to ”behead the girls” and a Senator with the conservative pro-Islamist Justice and Development party raised the case in parliament: ”Is construction work in Europe ever carried out in a bathing suit?”, he said….

The episode took place in a little town in the south-eastern Moroccan province of Taroudant but the case became prominent on social media. The young women, who were working to build a street, are part of a Belgian association called Board which has been promoting for over 14 years humanitarian projects in the North-African country. They are all students who are volunteering for the summer….

In the village close to Taroudant, the senator also said, there is no change of clothing for the summer because ”it is a rural and conservative area”. The elementary school teacher subsequently commented the post: ”You are absolutely right, they should be beheaded so that nobody can challenge our religion’s teachings”. The teacher was reported to the authorities for instigating terrorism and arrested. The post was removed within 24 hours but the minister’s parliamentary question remains. Meanwhile the students have travelled back to Belgium. (ANSAmed)

4 thoughts on “Morocco: Muslim elementary school teacher says Belgian volunteers “should be beheaded” because “they work in shorts””