Panic in Kashmir after India asks tourists and pilgrims to leave 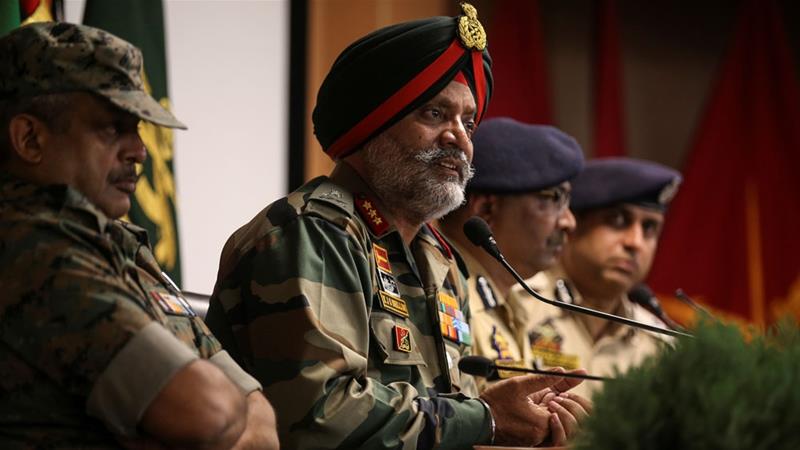 The order, issued on Friday by the Jammu and Kashmir state’s government, said that because of “intelligence inputs of terror threats” against the “Amarnath Yatra” (pilgrimage) and “the prevailing security situation”, pilgrims and tourists should leave the region “immediately”.

For 45 days every year, thousands of devout Hindus from across India trek to the region’s holy Amarnath cave located among the Himalayan mountains in southern Kashmir.

The order, which came days after India deployed 10,000 additional troops in the disputed region, triggered panic among the residents, who began to stockpile essential supplies, including food, medicines and fuel in anticipation that the situation may turn critical.

Speaking to Al Jazeera, Vijay Kumar, who is an adviser to the Jammu and Kashmir governor, refused to elaborate on the order, saying, “Everything is explained in it.”

A senior police official, on condition of anonymity, told Al Jazeera police have been told to remain prepared for a “massive law and order situation”. “And we are ready,” he said.

Tension in India-administered Kashmir increased last week after the Indian government sent an additional 10,000 paramilitary troops to the region.

Fears over Article 35A

In recent days, a series of official orders – including one issued by the Indian Railways warning of a “crisis situation” – has triggered rumours that the Indian government is planning to abrogate Kashmir’s special status guaranteed by the Indian constitution.

Kashmiris worry the Hindu nationalist government headed by Prime Minister Narendra Modi is trying to remove Article 35A of the constitution, which prevents people from outside the state from buying property there or claiming government jobs.

“It seems they want to choke all the space here and oppress people more. They do not care about people. They are only worried about the land and its resources,” said Nusrat Qadir, a 25-year-old student.

Article 35A has been challenged in the Supreme Court by several right-wing groups and leaders from the ruling Bharatiya Janata Party (BJP).

Mehbooba Mufti, the former chief minister of the region, said India “has chosen territory over people” and held an emergency meeting with other Kashmiri leaders on Friday evening.

“The economy is in free fall but I hope like always Kashmir isn’t used as a red herring to distract masses from the real issues. Such a move will have catastrophic consequences and push Kashmiris to the brink,” she tweeted.

You failed to win over the love of a single Muslim majority state which rejected division on religious grounds & chose secular India. The gloves are finally off & India has chosen territory over people.

Projecting, adding insult to injury and accusing India of “having failed” is typical Mohammedan gaslighting. The problem is the Mohammedan failure to behave like civilised people should.

Last month, a senior BJP leader said his party would revive a plan to build secure camps to resettle scores of Hindus in India’s only Muslim-dominated region.

With no clarity from the authorities, the region’s shaken residents are viewing the government order as yet another instance of the “psychological warfare” they say is being waged by India against them.

“The psychological warfare has been going on for the last 30 years and we are the subjects. We are not surprised at all. The world does not care about people dying here and they don’t care about what happens to us now,” said Nazir Ahmad, a 55-year-old shopkeeper in the region’s main city of Srinagar.

“Since morning, I have witnessed a rush of people buying cereals, rice and flour. No one really knows what is going to happen.”

Shabir Ahmad, 43, who works in a telecom company in Srinagar, said he got a message from his family to immediately leave the office and bring the essentials home.

“There were messages in various Whatsapp groups that a curfew is being imposed as the government is planning some big step in the state. When I reached the departmental store, there was a long queue,” he told Al Jazeera.

“There is a lot of panic in Kashmir this time. A lot needs to be explained by the government. An advisory has been issued and they don’t explain why such extraordinary measures are being taken,” he told Al Jazeera.

India and Pakistan divided Kashmir when they became independent in 1947 and have fought two of their three wars since over the territory, which both of the nuclear-armed neighbours claim in full.

India accuses Pakistan of supporting an armed rebellion in the region against Indian rule, an allegation Islamabad denies.

With nearly 700,000 soldiers deployed in the valley and along the de facto border with Pakistan (called the Line of Control or LoC), Kashmir is one of the world’s most militarised regions.

Monitoring groups say the conflict in India-administered Kashmir has claimed 70,000 lives, mostly civilians, over the past 30 years.