Ignore the jihad. “Climate change” is the biggest challenge of our time.

The Islamisation of Nigeria

In one of the most underreported stories of the year, Nigeria has seen rampant attacks on the Christian population of the country.

The ongoing slaughter of Christians in Nigeria is part of a “hidden agenda” to convert the nation to Islam, an agenda that reaches to the highest echelons of the nation’s leadership, according to local prelates.

Buhari and those in power “want to make sure the whole country becomes a Muslim country,” and they are using Boko Haram and the Fulani to achieve that objective.

Father Valentine Obinna, a priest of the Aba diocese in Nigeria, told the online Catholic news outlet Crux that the recent murders of priests and other Christians are not isolated events but are tied to a long-term program of the “Islamization of Nigeria.” Pope: ‘It Is an Honor to Be Attacked by the Americans’

Pope Francis said on Wednesday that he is honored to be attacked by American conservatives who would like to bring down his pontificate.

This deranged pope has strange ideas about honor, which is not really something that communists value.

Never have we seen a girl so young and with so many mental disorders treated by so many adults as a guru. 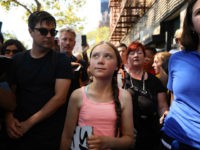 As the deeply disturbed Greta Thunberg spreads her climate panic, we must ask why so many world leaders listen to her.

Yes, Blitzer can see the carbon too. Or did he just fall through a hole in the ozone? These people are insane. That’s right, people. After “climate justice” comes “racial justice”. If you still believe it has anything to do with the climate you must be living under a rock.

I Support a Carbon Tax…

Shrillary once famously said “if it moves, we tax it”.  Fauxcahontas is keen to take it much further…

That makes sense, but not to our globalist elites, who have decided that we should be replaced.

That doesn’t faze the globalist elites that stopped Salvini for now.

One thought on “How the Manufactured Climate Panic Pervades Everything”