The EUSSR has revealed its true nature: a federalist monster that will not stop until nations are abolished

At the entrance to the Visitors Centre of the European Parliament, there is a plaque with these words:

“National sovereignty is the root cause of the most crying evils of our times….The only final remedy for this evil is the federal union of the peoples.”

They were written by Philip Kerr, later the Marquess of Lothian, who was a British diplomat and arch-appeaser in the build up to the Second World War. Like the modern Europhile zealots, he never dropped his doctrinaire outlook. Even on the eve of the Battle of Britain in 1940, he was urging Winston Churchill’s Government to reach a peace deal with Hitler’s regime. 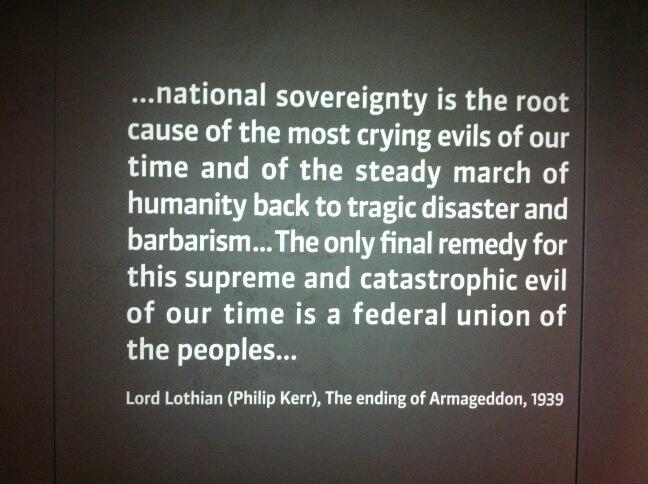 His addiction to federalism is shared by the EU today, hence the special place give to his chilling utterance.  The destruction of national sovereignty is the ideological driving force behind the Brussels oligarchs as they plot to build their federal superstate.

That explains why they are so obsessed with free movement, mass immigration and cultural diversity. Those are all instruments for smashing traditional nationhood and creating a new common European citizenship. As the EU’s rulers know only too well, a country without any borders or identity is not a country at all.

“an ever-recurring combination of inability, naivety and hypocrisy we can observe this time in Münster: The Egyptian Grand Mufti speaks in Germany of tolerance, inter-religious dialogue and peace. At the same time, his children in Egypt murder children, just because they are Christians.  Legitimised by many, many ideological books of the University of Al Azhar, led by him, the great sheikh himself.
And on the other hand, a chancellor who is either ignorant in the topic of Islam or naive enough to sit next to him.”

Most other organisations would have been humiliated or broken by a failure as spectacular as the current migrant crisis. The EU’s catastrophic decision to open the floodgates led to the arrival of more than 1.1 million migrants, most of them fit, young men. Amidst mounting social disintegration and division, this anarchic policy has fuelled the import of violent misogyny, welfare dependency and jihadist extremism. Earlier this week the EU border agency Frontex admitted that “the Paris attacks in November 2015 clearly demonstrated that irregular migratory flows could be used by terrorists to enter the EU.”

But, utterly unembarrassed, the Brussels federalists see the migration crisis as a perfect opportunity to pursue their agenda of political unification. Under the guise of sorting out the mess, they aim to grab more power, thereby further reducing the members states to the status of provinces in their empire.

That reality shines through the proposals presented this week by the European Commission to establish a new migration policy. Under the present rules, known as the Dublin Regulations, refugees are required to claim asylum in the first country they reach. But that system, dating back to the 1990s, comprehensively broke down last summer when German Chancellor Angela Merkel, in a fit of virtue-signalling Teutonic superiority, declared that all asylum seekers would be welcome in her country. It was a move eagerly cheered on by Europe’s ruling elite, even as chaos descended.

Inevitably, nothing in the EU plans involves bringing back internal borders or strengthening external frontiers. Essentially there are two options, both involving more central control. One is to keep the existing Dublin scheme, but introduce a “corrective mechanism” so that refugees could be redistributed around the EU at times of crisis to take the pressure of the Mediterranean states like Italy and Greece. The second more radical option is to scrap the Dublin rules and instead impose a mandatory scheme for redistributing migrants, through quotas based on the wealth and population of each member state.

In accordance with federalist dogma, both schemes involve a massive increase in EU power and a further erosion of national sovereignty. The migration crisis might be a nightmare for the peoples of Europe, but it is a dream for the federalists. They cannot even disguise their delight at the prospect of a tightening grip on the members states. “We need a sustainable system for the future, based on common rules ad a fairer sharing of responsibility,” says the Commission’s First Vice President, Frans Timmermans. The Belgian politician and federalist fanatic  Guy Verhofstadt goes even further, demanding a “fair distribution scheme” that will “put in place a much needed collective European response to the refugees crisis.”

There is no ‘refugee crisis’. What we have here is a Moslem invasion, created by EUSST traitors like Timmermans & Verhofstadt.

The direction of EU policy is absolutely clear.  The march towards the superstate is accelerating. For decades, the Europhile brigade has tried to pretend that we stay in the EU and keep our national integrity.  Indeed, when Ted Heath’s Tory Government signed us up to the Common Market in 1973,  they claimed that the move would involve “no essential loss of sovereignty”. But, after the migration crisis, the deceit cannot go on.

The Remain camp will no doubt claim that the new EU migration policy will have little impact on Britain because we have an opt-out, but that is just another deception. For a start, the EU could bully us into accepting quotas by threatening not to accept any deportations of EU migrants from Britain or by imposing fines. Or the EU could just ignore our opt-out, as it so often does with policies it does not like. That would especially be true if the Referendum vote is to Remain. In that case, Britain will have absolutely no leverage, no bargaining power. And whatever the formal rules, the fact is that EU migration has a massive impact on Britain;  in the year to December 2015, no fewer than 630,000 EU migrants were issued with National Insurance numbers here.

The Commission’s decision on refugee policy is bound to have a profound impact on the Referendum debate. The choice is now more stark than ever: we either regain control of our own national borders, or we become sucked further into a system that dictates how many foreigners are allowed to settle here. The Remain camp likes to present the two alternatives as either a “leap into the known” or the reassuring stability of the status quo under Brussels rule. But there is nothing remotely certain about the EU’s future.

The current migration looks certain to worsen, especially once the EU fulfils its goal of enlargement by giving membership to Turkey and Bosnia, with their 80 million-strong Muslim population. Some EU supporters even want enlargement to extend to the strife-torn, Islam dominated countries of North Africa. This would be “the most effective policy tool that Europe possesses to deal with instability on its borders,” claims one pro-EU analyst.

The real leap into the unknown lies in our continued membership. Brexit would be a return to a known position that existed for centuries before 1973, when Britain was a successful, independent nation.

One thought on “The EUSSR has revealed its true nature: a federalist monster that will not stop until nations are abolished”