Two articles here; one about the Kurds, which seems to get everyone’s knickers in a twist since Trump wants to pull the troops out; & the other article is about the lies, the taqiyya about the Iranian nuclear bomb. 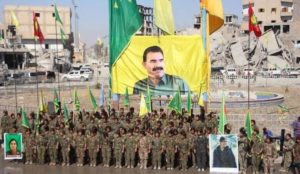 Uninformed savants across the political spectrum have pilloried President Trump for his eminently rational decision to draw down the U.S. troop commitment (initially, only 25, as it turns out!) to the Syrian morass (whose “dynamic” has remained largely unchanged since the late 1940s).

Most of the ire directed at Mr. Trump has to do with hand-wringing over our “Kurdish allies,” even after the President warned Turkey not to engage in its habitual behaviors — since Ataturk created his ethno-racist state — towards the Kurds. Regardless, here are a few salient points one should bear in mind about the Kurds which the hand-wringers conveniently ignore in their hagiographies:

— Kurdish predatory mass killings of Christians and Yazidis are well-characterized and went on for centuries. Grinding persecution continues to this day, as can be gleaned from detailed reports by both Assyrian and Yazidi organizations (here; here; here)

Iran’s Khamenei: “Building and stockpiling nuclear bombs is wrong and using it is haram”

There will be great rejoicing in the Western establishment media over this, and lots of tweaking of Trump from the Leftist establishment figures such as John Kerry and Ben Rhodes who pushed the Iran nuclear deal. This might be more reassuring, however, were it not for the Shi’ite Muslim idea of taqiyya….

This might be more reassuring, however, were it not for the Shi’ite Muslim idea of taqiyya; Sunnis have doctrines regarding deceiving unbelievers as well, but it was the Shia who made lying a science. Taqiyya as a specific concept by that name was developed during the time of the sixth Imam, Jafar al-Sadiq, in middle of the eighth century, when the Shi’ites were being persecuted by the Sunni caliph al-Mansur. Taqiyya allowed Shi’ites to pretend to be Sunnis in order to protect themselves from Sunnis who were killing Shi’ites. Until the conversion of Persia to Shi’ism, taqiyya was an important element of Shi’ite survival, for Sunnis, in the majority almost everywhere, would not infrequently take it upon themselves to cleanse the land of those whom they referred to as Rafidites, that is, rejecters — those who rejected the caliphates of Abu Bakr, Umar, and Uthman.

Some Shi’ite thinkers turned the secrecy that had become a necessity into a virtue. The medieval Shi’ite scholar Ali ibn Musa ibn Tawus, who died in 1266, taught that Allah had revealed Shi’ism secretly, and it was incumbent upon the believers to practice it in secret. At the end of days, Allah will admit them secretly into Paradise. Some secrets were never to be revealed under any circumstances. The fifth imam, Muhammad al-Baqir, who died in 732, once gave a book to one of his disciples, telling him, “If you ever transmit any of it, my curse and the curse of my forefathers will fall upon you.”

The sixth Imam, Jafar Al-Sadiq, who died in 765, had a servant who was suspected of having revealed some of the secrets of the faith. The Imam lectured, “Whoever propagates our tradition is like someone who denies it.…Conceal our doctrine and do not divulge it. God elevates in this world one who conceals our doctrine and does not divulge it and he turns it in the next world into a light between his eyes which will lead him to Paradise. God abases in this world one who divulges our tradition and our doctrine and does not conceal it, and in the next world he removes the light from between his eyes and turns it into darkness which will lead him to hell. Taqiyya is our religion and the religion of our fathers; he who has no taqiyya has no religion.”

Other Imams also emphasized the cardinal importance of taqiyya, apparently not only because Shi’ites were under constant threat from Sunnis, but because Shi’ite Islam contained doctrines that must stay hidden from outsiders. Some sayings of the Imams include, “He who has no taqiyya has no faith”; “he who forsakes taqiyya is like him who forsakes prayer”; “he who does not adhere to taqiyya and does not protect us from the ignoble common people is not part of us”; “nine tenths of faith falls within taqiyya”; “taqiyya is the believer’s shield (junna), but for taqiyya, God would not have been worshipped.”

Taqiyya is ultimately practiced in order to protect Islam and the Muslim community. In this case, Khamenei may be employing it to keep more Western countries from implementing sanctions or complying with the U.S. sanctions. 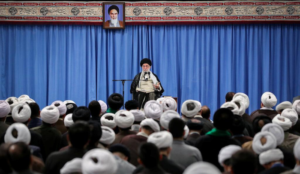 “Building and stockpiling nuclear bombs is wrong and using it is haram (religiously forbidden) … Although we have nuclear technology, Iran has firmly avoided it,” State TV quoted him as saying….

— Kurdish “region(s)” were ethnically cleansed of Jews by the late 19th/early 20thcenturies in a series a pogroms, compounded by constant grinding persecution including enslavement of Jewish families handed over between generations of Kurds as “family property” (p. 658; p. 108)

— The Kurds of Turkey, brutally oppressed (here) by Ataturk’s ugly ethno-racist Turkish supremacist state (here), since the 1920s, ongoing, evolved their own brutal (here) Marxist terror organization, the PKK, to combat this oppression. Those Marxist PKK elements are the fighting backbone of the Syrian Kurds whom the U.S. is now claimed to be “abandoning”

— Kurds of Iraqi “Kurdistan” have enshrined the Sharia (“This Constitution confirms and respects the Islamic identity of the majority of the people of Iraqi Kurdistan. It considers the principles of Islamic Sharia as one of the main sources of legislation… It is not allowed to enact a law inconsistent with the provisions of the fundamentals of Islam,” Articles 6 & 7) and even apply it to Kurdish conscientious objectors to Islam who escape their Kurdish Muslim paradise and flee to the West. (here; here)

— 50% of Kurdistan’s women undergo FGM, sanctioned by the Sharia

Johny Messo is head of the World Council of Arameans. In 2014 Messo issued this statement when Israel’s Minister of Interior, H.E. Gideon Sa‘ar, signed a document that recognizes “Aramean” as a distinct national identity in Israel’s population registry:

We greatly commend Israel for being the first state in the world to recognize our people in keeping with international law. This fantastic news has had a major impact on the global Aramean population. It encourages us to continue our legal struggle for recognition by our home countries of Turkey, Syria, Iraq and Lebanon”

Messo, was quoted from this story published today (10/10/19) from about the depredations and duplicity of the Kurdish Marxist brigades operating within Northern Syria:

“The PYD/YPG is threatening Syriacs and still forcibly detaining some children to join them,” Johny Messo, head of the World Council of Arameans (Syriacs), told Anadolu Agency on Thursday. Telling how the terrorist PYD/YPG fought other terrorist groups only to pursue its own territorial aims, he explained: “The aim of the PYD/YPG in its struggle against Daesh was to seize their territories and integrate them as part of the autonomous Kurdish region envisaged by them.” The U.S. had enlisted the PYD/YPG to fight Daesh, while Turkey objected that using one terror group to fight another makes no sense. Messo said the PYD/YPG and Daesh are both terror groups, differing only in aims, and sometimes even working together. “For example, the BBC showed that the PYD/YPG signed an agreement with Daesh. And, according to our own sources, the PYD/YPG took former Daesh members with them,” he added. Messo said it is the PYD/YPG — the Syrian branch of the [MARXIST] terrorist PKK….