Muslim girls in Sydney are dressed in white from head to toe as part of a hijab ceremony to signify the age when they must cover up their bodies, with an Islamic imam slamming it as a step toward Sharia law.

Australia’s most senior Shia cleric Sheikh Kamal Mousselmani presided over the ceremony where 24 girls walked on stage to show their maturity.

‘The hijab is compulsory for the girls when they become nine according to our religion,’ he told Daily Mail Australia. 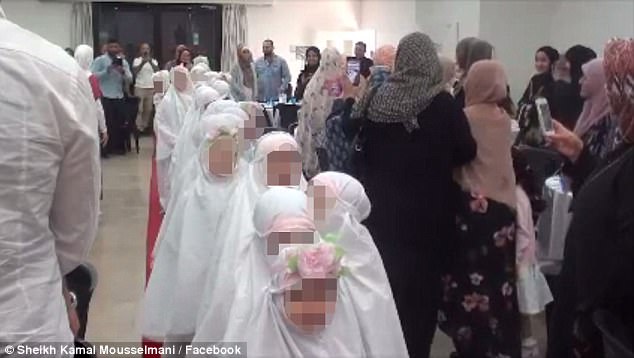 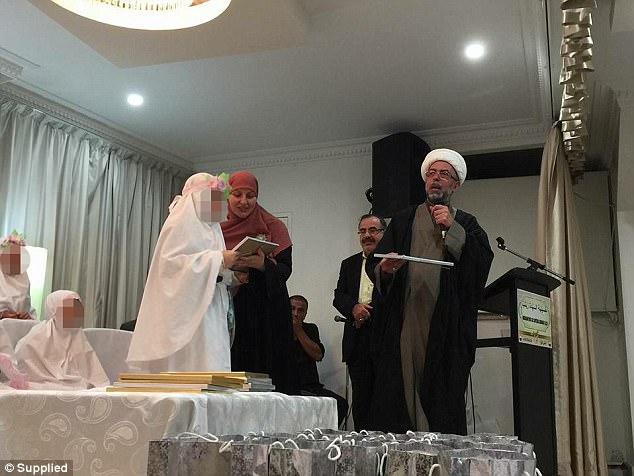 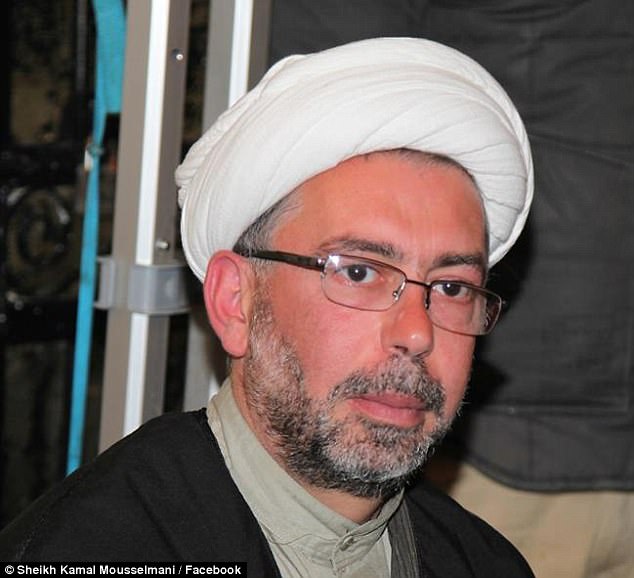 Aisha: The Child Wife of Muhammad

The thought of an old man becoming aroused by a child is one of the most disturbing thoughts that makes us cringe as it reminds us of pedophilia and the most despicable people. It is difficult to accept that the Holy Prophet married Aisha when she was 6-years-old and consummated his marriage with her when she was 9. He was then, 54 years old.

Sahih Muslim Book 008, Number 3310:
‘A’isha (Allah be pleased with her) reported: Allah’s Apostle (may peace be upon him) married me when I was six years old, and I was admitted to his house when I was nine years old.

Sahih Bukhari Volume 7, Book 62, Number 64
Narrated ‘Aisha:
that the Prophet married her when she was six years old and he consummated his marriage when she was nine years old, and then she remained with him for nine years (i.e., till his death).

Sahih Bukhari Volume 7, Book 62, Number 65
Narrated ‘Aisha:
that the Prophet married her when she was six years old and he consummated his marriage when she was nine years old. Hisham said: I have been informed that ‘Aisha remained with the Prophet for nine years (i.e. till his death).” what you know of the Quran (by heart)’

Some Muslims claim that it was Abu Bakr who approached Muhammad asking him to marry his daughter. This is of course not true and here is the proof.

Sahih Bukhari 7.18
Narrated ‘Ursa:
The Prophet asked Abu Bakr for ‘Aisha’s hand in marriage. Abu Bakr said “But I am your brother.” The Prophet said, “You are my brother in Allah’s religion and His Book, but she (Aisha) is lawful for me to marry.”

Arabs were a primitive lot with little rules to abide. Yet they had some code of ethics that they honored scrupulously. For example, although they fought all the year round, they abstained from hostilities during certain holy months of the year. They also considered Mecca to be a holy city and did not make war against it. A adopted son’s wife was deemed to be a daughter in law and they would not marry her. Also it was customary that close friends made a pact of brotherhood and considered each other as true brothers. The Prophet disregarded all of these rules anytime they stood between him and his interests or whims.

Abu Bakr and Muhammad had pledged to each other to be brothers. So according to their costoms Ayesha was supposed to be like a niece to the Holy Prophet. Yet that did not stop him to ask her hand even when she was only six years old.

But this moral relativist Prophet would use the same excuse to reject a woman he did not like.

Hamza and Abu Bakr both were the foster brothers of Muhammad. But Ayesha must have been too pretty for the Prophet to abide by the codes of ethics and custom.

In the following Hadith he confided to Ahesha that he had dreamed of her before soliciting her from her father.

Sahih Bukhari 9.140
Narrated ‘Aisha:
Allah’s Apostle said to me, “You were shown to me twice (in my dream) before I married you. I saw an angel carrying you in a silken piece of cloth, and I said to him, ‘Uncover (her),’ and behold, it was you. I said (to myself), ‘If this is from Allah, then it must happen.

Whether Muhammad had actually such dream or he just said it to please Ayesha is not the point. What matters here is that it indicates that Ayesaha was a baby being “carried” by an angel when the Prophet dreamed of her.

There are numerous hadithes that explicitly reveal the age of Ayesha at the time of her marriage. Here are some of them.

Sahih Bukhari 5.236.
Narrated Hisham’s father:
Khadija died three years before the Prophet departed to Medina. He stayed there for two years or so and then he married ‘Aisha when she was a girl of six years of age, and he consumed that marriage when she was nine years old.

Sahih Bukhari 5.234
Narrated Aisha:
The Prophet engaged me when I was a girl of six (years). We went to Medina and stayed at the home of Bani-al-Harith bin Khazraj. Then I got ill and my hair fell down. Later on my hair grew (again) and my mother, Um Ruman, came to me while I was playing in a swing with some of my girl friends. She called me, and I went to her, not knowing what she wanted to do to me. She caught me by the hand and made me stand at the door of the house. I was breathless then, and when my breathing became Allright, she took some water and rubbed my face and head with it. Then she took me into the house. There in the house I saw some Ansari women who said, “Best wishes and Allah’s Blessing and a good luck.” Then she entrusted me to them and they prepared me (for the marriage). Unexpectedly Allah’s Apostle came to me in the forenoon and my mother handed me over to him, and at that time I was a girl of nine years of age.

And in another Hadith we read.

Sunan Abu-Dawud Book 41, Number 4915,  also  Number 4916  and  Number 4917
Narrated Aisha, Ummul Mu’minin:
The Apostle of Allah (peace_be_upon_him) married me when I was seven or six. When we came to Medina, some women came. according to Bishr’s version: Umm Ruman came to me when I was swinging. They took me, made me prepared and decorated me. I was then brought to the Apostle of Allah (peace_be_upon_him), and he took up cohabitation with me when I was nine. She halted me at the door, and I burst into laughter.

In the above hadith we read that Ayesha was swinging, This is a play of little girls not grown up people. The following Hadith is particularly interesting because it shows that Ayesha was so small that was not aware what was going on when the Holy Prophet “surprised” her by going to her.

Sahih Bukhari Volume 7, Book 62, Number 90
Narrated Aisha:
When the Prophet married me, my mother came to me and made me enter the house (of the Prophet) and nothing surprised me but the coming of Allah’s Apostle to me in the forenoon.

Must have been quite a surprise! But the following is also interesting because it demonstrates that she was just a kid playing with her dolls. Pay attention to what the interpreter wrote in the parenthesis. (She was a little girl, not yet reached the age of puberty)

Sahih Bukhari Volume 8, Book 73, Number 151
Narrated ‘Aisha:
I used to play with the dolls in the presence of the Prophet, and my girl friends also used to play with me. When Allah’s Apostle used to enter (my dwelling place) they used to hide themselves, but the Prophet would call them to join and play with me. (The playing with the dolls and similar images is forbidden, but it was allowed for ‘Aisha at that time, as she was a little girl, not yet reached the age of puberty.) (Fateh-al-Bari page 143, Vol.13)

Sahih Muslim Book 008, Number 3311
‘A’isha (Allah be pleased with her) reported that Allah’s Apostle (may peace be upon him) married her when she was seven years old, and he was taken to his house as a bride when she was nine, and her dolls were with her; and when he (the Holy Prophet) died she was eighteen years old.

The holy Prophet died when he was 63. So he must have married Ayesha when he as 51 and went to her when he was 54.

Sahih Bukhari Volume 8, Book 73, Number 33
Narrated ‘Aisha:
I never felt so jealous of any woman as I did of Khadija, though she had died three years before the Prophet married me, and that was because I heard him mentioning her too often, and because his Lord had ordered him to give her the glad tidings that she would have a palace in Paradise, made of Qasab and because he used to slaughter a sheep and distribute its meat among her friends.

Khadija died in December of 619 AD. That is two years before Hijra. At that time the Prophet was 51-years-old. So in the same year that Khadija died the prophet married Ayesha and took her to his home 3 years later, i.e. one year after Hijra. But until she grow up he married Umm Salama.

In another part Ayesha claims that as long as she remembers her parents were always Muslims.

Narrated ‘Aisha:
(the wife of the Prophet) I never remembered my parents believing in any religion other than the true religion (i.e. Islam),

If Ayesha was older i.e. 16 or 18 as some Muslims claim, she would have remembered the religion of her parents prior to becoming Muslims.

Now someone may still claim that all these hadithes are lies. People are free to say whatever they want. But truth is clear like the Sun for those who have eyes.

No sane person would be aroused by a 9-year-old child. Decent people wince at the thought of this shameful act. Yet some Muslims deny them. The question is why so many followers of Muhammad would fabricate so many false hadithes about the age of Ayisha, which incidentally confirm each other?

I can tell you why people would attribute false miracles to their prophet. Babis believe that Bab started to praise God as soon as he was born. There is a Hadith like that also about Muhammad. Christians believe the birth of the Christ was miraculous and the Jews believe Moses opened a dry passageway through the Red Sea. Believers love to hear these stories. It confirms their faith. There are many absurd miracles attributed to Muhammad in the hadiths, despite the fact that he denied being able to perform any miracles. But why should anyone fabricate a lie about the age of Ayisha that would portray his Prophet as a pedophile?

One thought on “Sydney: Moslem girls aged nine get ready to be married off”