Days of protests in Iran over rising fuel prices and a subsequent government crackdown have killed more than 100 people across the country, according to rights group Amnesty International.

In a statement on Tuesday, the UK-based organisation accused Iranian security forces of using “excessive and lethal force” to crush the demonstrations since they started on Friday.

“At least 106 protesters in 21 cities have been killed, according to credible reports,” Amnesty said. “The real death toll may be much higher with some reports suggesting as many as 200 have been killed.”

No immediate reaction was available from Iran’s government to the estimated death toll.

According to figures collated by Al Jazeera, at least 11 people – five security forces and six civilians – have been killed in the unrest.

Iranian authorities have not offered a definitive account of how many people have been injured or killed in the protests.

But the semi-official ISNA news agency reported late on Monday that three members of Iran’s security forces were killed by “rioters” near the capital, Tehran.

Raha Bahreini, Amnesty’s researcher on Iran and Human Rights, said their death toll was based on information received from witness accounts on the ground, human rights activists inside the country, as well as journalists and reliable sources outside the country.

“The information that we have obtained reveals a horrific pattern of unlawful killings across the country,” she told Al Jazeera from London.

“The information that we’ve received so far suggests that in a pattern consistent with past practices, security forces are even refusing to return the bodies of many of those killed to their families, or are forcing families to bury their loved ones under rushed circumstances and without an independent autopsy, which is of course against international law and standards.”

‘Not from the people’

Since Friday, Iran has been rocked by nationwide protests sparked by growing anger and frustration after authorities rolled out a petrol-rationing scheme and slashed subsidies in a move that sent prices soaring by 50 percent.

President Hassan Rouhani has promised the price increase will be used to fund new subsidies for poor families.

But the decision unleashed widespread anger among Iranians such as Maryam Kazemi, a 29-year-old accountant in the southern Tehran suburb of Khaniabad, who said the new cost of fuel was “putting pressure on ordinary people”.

“It was a bad decision at a bad time. The economic situation has long been difficult for people, and Rouhani unexpectedly implemented the decision on fuel,” she told The Associated Press.

Iran’s Supreme Leader Ayatollah Ali Khamenei said on Tuesday in remarks published on his official website the protests were a security matter and not carried out by the people.

“Friends and enemies should know we have pushed the enemy back in the military, political and security war arena,” he said.

“This work of these days has been security work, not from the people.”

Khamenei previously blamed the turmoil on Iran’s foreign foes, including the United States, and denounced protesters as “thugs”.

In a media conference on Tuesday, Iran’s judiciary spokesman Gholamhossein Esmaili said calm had been restored in the country after days of violence that saw major roads blocked, banks torched, and shops looted.

“Snipers have also shot into crowds of people from rooftops and, in one case, a helicopter,” the rights group reported.

Unverified social media footage showed protesters burning images of senior officials and calling on clerical rulers to step down, as well as clashes between security forces and protesters.

About 1,000 demonstrators have been arrested, authorities said. 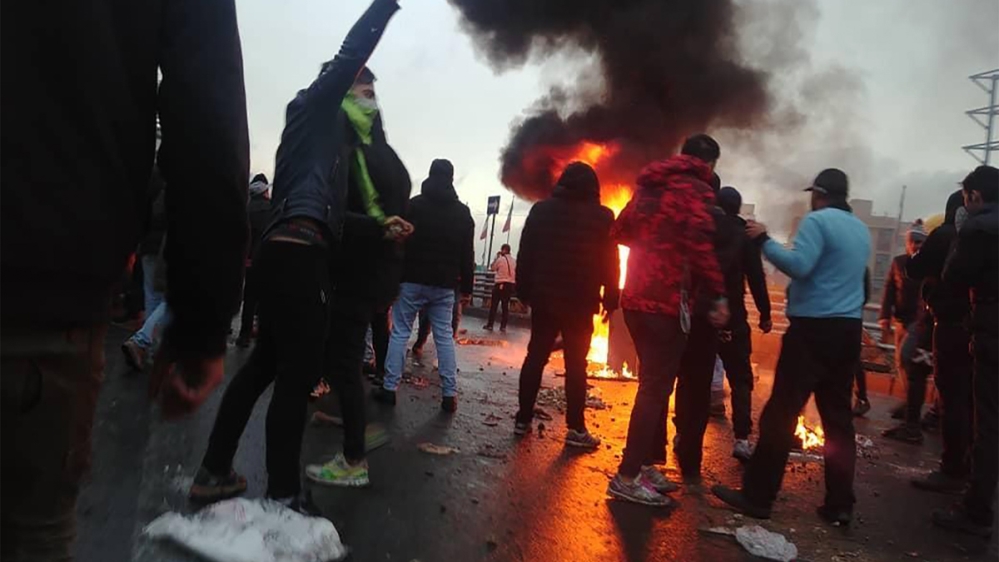 Iranian protesters gather around a fire during a demonstration in the capital Tehran on Saturday [AFP]
.

Amnesty called on Iranian authorities to lift the “near-total block on internet access designed to restrict the flow of information about the crackdown to the outside world”.

It also urged the international community, including the United Nations and the European Union, to hold Iranian authorities to account for the “unlawful killings”.

In Pictures: Iranians protest against increase in fuel prices

On Monday, the powerful Revolutionary Guard Corps warned of “decisive” action if the protests went on.

“Unfortunately, statements from top officials, including the supreme leader, president, and the head of the judiciary in recent days have all given a green light to the security forces to continue the bloodshed,” Bahreini said.

“That is why it is very crucial that the international community steps in, calls on Iranian authorities to end the crackdown, and also urges Iran to allow independent UN experts to visit the country, hospitals and detention centres to give a more fair picture about what is happening.”