Moonbattery on steroids. How did we sink to this level of stupid? 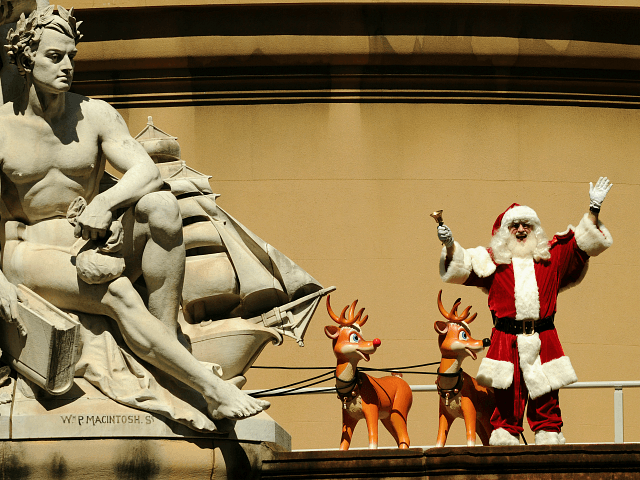 Diversity Council Australia is urging employers to drop “Christmas parties” in favour of “holiday season drinks” so Muslims and other non-Christians “feel included at this time of year”.

“If you’re having a Christmas celebration, try to make sure it’s inclusive of other faiths as well because the office is for everybody,” hectored Lisa Annese for the Diversity Council, in comments to the Herald Sun reported by MailOnline.

Following the backlash which Annese’s comments provoked, the Diversity Council issued an irritable statement insisting that they “At no stage… ever urged bosses not to mention Christmas.”

“Lots of organisations celebrate the end of year holiday break with a Christmas party,’ the Council, which has received Australian taxpayers’ money to advise government agencies, explained testily.

Authorities in Queensland and Tasmania respond to public anger over climate with laws to curb protest and dissent. 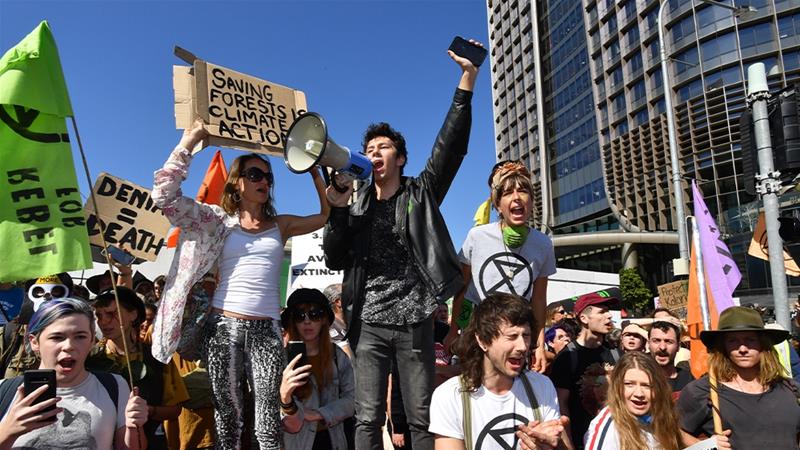 Some Australian states are cracking down on climate activists like Extinction Rebellion with tough new laws that could send protesters to jail [File: Dan Peled/EPA]

What’s wrong with a Turk lecturing us on climate?

The powerful IEA boss says Australia’s reputation is at risk and places it in the “top three” nations in the world where the climate debate has been derailed.

Climate activist Greg Rolles does not enjoy breaking the law, but he feels like there is no other option.

“Sometimes you’ve got to put the common good of all people ahead of your own needs and interests,” Rolles told Al Jazeera. “I don’t want to be bullied by the media or deal with police, but I also don’t want to leave the next generation with the burden of a burning home.”

Rolles, 37, is a member of Christian Climate Action Australia.

In November last year, he spent several hours suspended in a bamboo tripod he had erected over a railway line used to transport coal to the Abbot Point terminal, about 200 kilometres (124 miles) south of Townsville in far north Queensland. Abbot Point is owned by Adani, an Indian mining company, which is the focus of significant protest as it prepares to open a new coal mine that could affect the Great Barrier Reef.

Arrested and charged with three counts including trespassing, Rolles argued in court that his actions were permissible under the “extraordinary emergency” defence, which says individuals are not criminally liable if they are acting in response to a sudden emergency. An oft-cited example would be shipwrecked sailors forced to eat the weakest crew member in order to survive.

This guy is a certifiable lunatic.

But as climate protests become widespread, it is not just fines with which activists are being threatened. 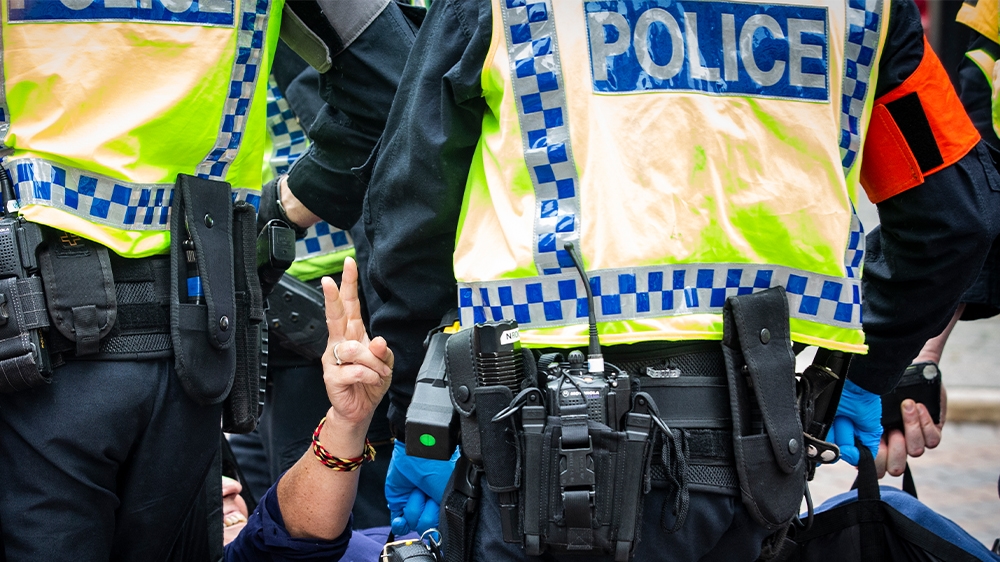 The authorities in some Australian states are taking a tougher line on protests because they say the tactics of groups such as Extinction Rebellion (XR) put people at risk [File: Tony McDonough/EPA]
.

Under new laws recently enacted in Queensland, people using so-called “dangerous devices” – such as the lock-on devices that activists use to attach themselves to each other or to immovable objects such as fences and rail tracks – risk prison.

The law was developed after a series of disruptive Extinction Rebellion actions in Brisbane in mid-2019, in which more than 70 people were arrested and charged by police.

Queensland Premier Annastacia Palaszczuk argued the legislation was necessary because police and bystanders were at risk.

“Inside these cylinders and drums are glass fragments – even butane gas containers – so that anyone trying to cut a protester free will be injured or worse,” Palaszczuk told Queensland Parliament in August.

Everyone has the right to conduct a peaceful protest but the activities of some are not. Blocking roads is dangerous, reckless, irresponsible, selfish and stupid. The sinister tactics some protesters are using are dangerous and designed to harm. pic.twitter.com/y7Izir3SuD

There is no evidence that the protesters in Queensland have used devices with glass or gas. Under the law, police also have the power to search anyone they reasonably suspect is in possession of a lock-on device. People found using such devices could face up to two years in jail.

The magistrate in Rolles’s case said that Rolles could have used other methods to make his views heard, such as speaking to his local member of Parliament or taking part in a lawful protest. Rolles said these suggestions were inadequate.

“This is a climate emergency, a major crisis our political leaders are ignoring,” he told Al Jazeera. “We only have one planet home and it’s burning… If we don’t use non-violent protest, we won’t get in the way. History shows this.”

Matt McDonald, an associate professor at the University of Queensland and an expert in climate politics, agrees that protests are key to changing government policy on issues such as climate change.

“We tend to see action from governments even in the face of their ideological tendencies when they sense that public opinion is going in the other direction,” McDonald told Al Jazeera.

“For example, in the 2007 election, [then-Prime Minister] John Howard promised carbon pricing… The scale of public opinion in polls and protests can end up putting a lot of pressure on a government.”

McDonald said that the Queensland Labor government’s new legislation was more about sending a signal to its more conservative voters rather than actually stopping protests.

“Using the idea of disruption or concern for health or wellbeing is thoroughly disingenuous,” he explained. “It’s a strategy that helps them stay in power in the next election; they need to be seen as not being aligned to groups like Extinction Rebellion.”

In Tasmania, Australia’s southernmost state, even stricter anti-protest laws may soon be enacted. 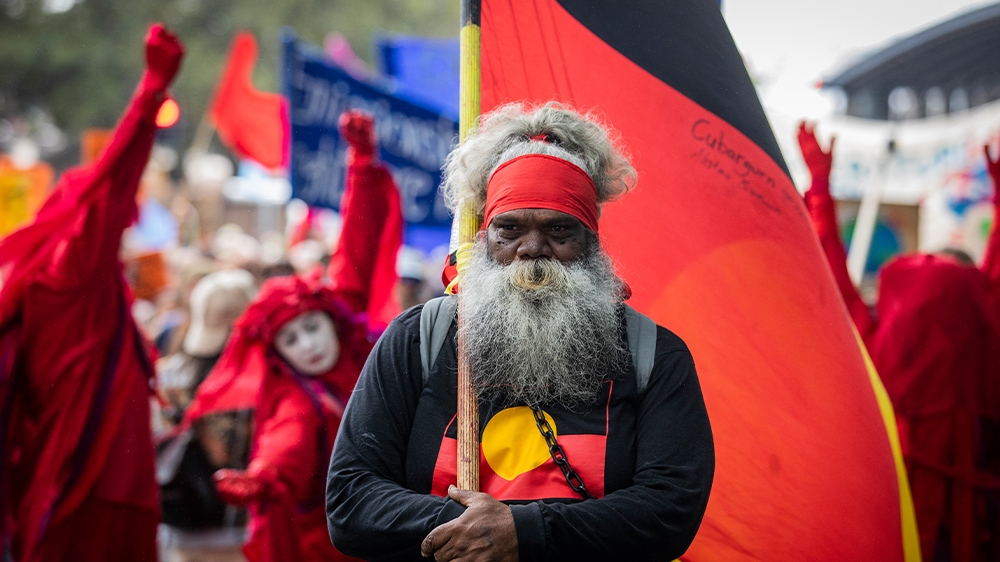 Activists from Extinction Rebellion (XR) have been holding protests across Australia this year [File: Tony McDonough/EPA]
.

The Workplace (Protections from Protesters) Amendment Bill would amend existing legislation found unconstitutional by the Australian High Court in 2017 because it restricted free speech. The amendment recently passed Tasmania’s lower house of Parliament and will be discussed in the upper house when it sits again in 2020.

Leader of the Tasmanian Greens, Cassy O’Connor, described the proposed amendment to Al Jazeera as “draconian”.

“The law makes everywhere in Tasmania a potential workplace where people protesting face arrest. It removes police ‘move on’ powers, where police should ask protectors to move on [prior to arrest],” she said. “A person obstructing a business or taking part in a protest in a public place means that police can arrest them immediately under the act.”

Individuals found guilty of breaking this law could face jail terms of 18 months for a first offence, and four years for a second offence. Threatening to protest a business on social media would also become a criminal act under the amendment.

“This is draconian in that it provides an incredibly broad definition of business activity,” O’Connor said. “Critically, it is designed to have a chilling effect on dissent on an island that has a long and proud history of public protest.”

The Tasmanian Chamber of Commerce and Industry (TCCI) said they welcomed the proposed legislation because it would protect businesses and workers.

“The TCCI supports absolutely the right of people to protest lawfully, but not to conduct economic terrorism,” CEO Mark Bailey said in a statement provided to Al Jazeera.

However, many are doubtful that tough laws will stop climate change activists.

“If you’re chaining yourself to a fence or a bulldozer, these people aren’t thinking selfishly about these results, they’re already really mobilised,” McDonald said. “For every person who might be dissuaded, there will be someone else who will want to do it.”

Nicole Rogers from the School of Law and Justice at Southern Cross University believes that the definition of what constitutes “lawful” behaviour may even begin to change as climate protests become more widespread.

“Standards of behaviour aren’t stable, especially when change is inevitable,” she told Al Jazeera. “With climate change, there’s no safe place, there’s nothing we can take for granted any more. So the concept of disruption and shifting standards really comes to light in this situation.”

“A process of ongoing adjustments in the face of galloping catastrophic change lies ahead of us,” Rogers explained. “With the advantage of hindsight, we’re going to be judged very harshly – what seems reasonable now will come to seem unreasonable for future generations.”

Activist Rolles says the threat of jail is not enough to stop him and others from pushing for climate action. As a Christian, he believes it is his moral, civil, and spiritual duty to act, and since November last year, he has been arrested on two additional occasions.

“We have so many freedoms in Australia because our ancestors fought for them,” he added. “If we don’t fight hard and give everything we’ve got, we will lose all these privileges in the climate crisis.”

O’Connor of the Tasmanian Greens agrees.

“All across Australia, hundreds of thousands are taking to the streets to protect the climate,” she said. “Instead of looking at its own policies on the environment, the government’s response is designed to make the problem go away by locking it up.

“People don’t want to go to jail, but you cannot jail your way out of the climate crisis.” 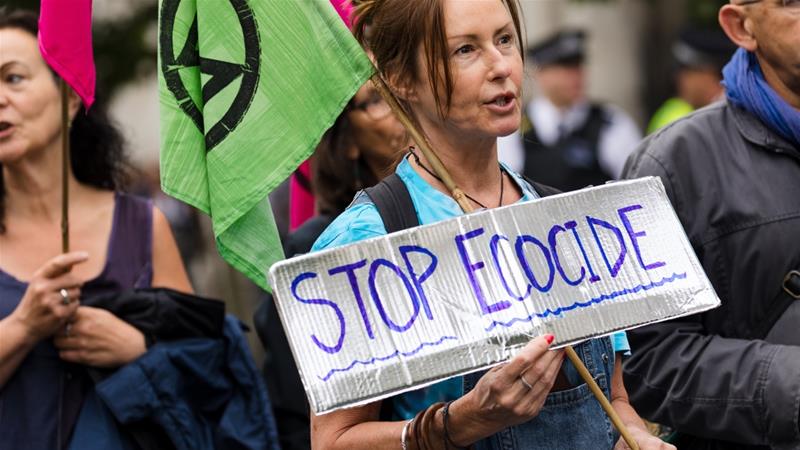 To late ,,this is already happening in Australia,,
Has anyone noticed that the names of the 100+ people arrested have not been made public.

ISIS is urging its followers to spark wildfires across the US and Europe, according to reports. At least four propaganda posters have appeared on Quraysh, a pro-ISIS media outlet, urging followers …

NYPOST.COM
ISIS urges followers to ‘ignite fires’ in forests across US and Europe
Sergio Redegalli