That’s one of the problems. Now here’s another case of ‘workplace violence’, obviously, because no one is allowed to connect the dots. “We will never know what made him do it”, he had ‘mental issues”, he  ‘was bullied” … we heard it all before.  But saying clearly here we have a case of an allahuakbaring Saudi Moslem who went on jihad shooting Americans while his buddies filmed it would be ‘islamophobic’, and that’s verboten. Even under Trump. Not impressed.

Yes, that’s also true. But the much bigger problem is that we’re not allowed to identify the enemy:

Pensacola jihadi ranted about “crimes against Muslims,” investigators trying to determine if he had religious motive

“Sources told ABC News that investigators are working to determine if the shooter was acting out because of religious or ideological reasons or if there was some sort of problem or hostility that developed in the course of the training at Pensacola.”

All right. But there is also the fact that he wrote an online rant in which he “expresses hatred toward Americans because of crimes against Muslims and humanity as well as US support for Israel.”

Authorities are trying to determine whether or not Alshamrani actually wrote it, and that’s a legitimate question. But if he really did, there should be no doubt about his motive. There still will be, however. 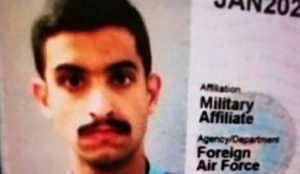 PENSACOLA, Fla. — U.S. law enforcement officials were digging into the background of the suspected Florida naval station shooter Friday, to determine the Saudi Air Force officer’s motive and whether it was connected to terrorism.

As questions swirled about the shooting, which left four people dead and multiple people wounded, officials identified the suspect as 2nd Lt. Mohammed Saeed Alshamrani, an aviation officer in the Saudi Air Force. The officials spoke on condition of anonymity to discuss an ongoing investigation.

Alshamrani was attending the aviation school at the base, one of hundreds of international military members who are receiving training there.

Armed with a semi-automatic handgun with an extended magazine, the shooter opened fire in a classroom building on Friday morning. He was apparently firing at random and at one point was slowed when somebody barricaded a door, allowing others to flee out of the building.

The attack left four people dead, including the assailant, and multiple people wounded.

Sources told ABC News that investigators are working to determine if the shooter was acting out because of religious or ideological reasons or if there was some sort of problem or hostility that developed in the course of the training at Pensacola.

Investigators have found what purports to be an online screed written by the shooter and are working to determine if it is legitimate. In it, the writer expresses hatred toward Americans because of crimes against Muslims and humanity as well as US support for Israel….

Trump’s ‘Principled Realism’ Is Not Very Realistic about Islam

The principal fiction in the president’s speech in Saudi Arabia was the claim that we share ‘common values’ with the sharia society.

So for what exactly is the “extreme vetting” going to vet?

Trump fans, he’s not a special needs child who you have to keep interpreting the words and actions of, he’s a 73 year old man who must be judged by what he says and does. When he tweets out on behalf of our enemy, the Saudi dictator, lying about how badly the Saudi people feel about the Saudis who murdered Americans yesterday, adding the ludicrous lie that “the Saudi people love the American people so much”, you have to stop interpreting his pathetic words as somehow good, and realize that he’s writing this in the wake of murdered Americans. Don’t you think he should have written on behalf of Americans, and the friends and families of the murdered Americans, instead of on behalf of our enemies?

More Americans have been killed inside the US by Saudi Arabian citizens than any other group of Muslim terrorists.