This is from the “too crazy for my shirt’ department.

Fusilier Lee Rigby’s killer Michael Adebolajo is part of a deradicalisation programme in the jail where London Bridge attacker Usman Khan was an inmate, it was reported last night.

Adebolajo, 34, is acting as an unofficial mentor to inmates at HMP Woodhill in Buckinghamshire, from which Khan was released in December last year, according to The Sun on Sunday.

He is serving a life sentence for the horrific murder of Drummer Rigby in 2013. Adebolajo reportedly renounced extremism last year and apologised to the soldier’s family, claiming that he was ‘brainwashed’ and ‘misinterpreted the Koran’.

He should get another 10 years for being a filthy liar. He followed the Koran to the letter. He may be brainwashed, but he certainly did not ‘misinterpret’ the Koran.

A source told The Sun on Sunday: ‘Michael’s U-turn has been astonishing but he insists he is on the path of reform and has been helping to talk to other prisoners about the importance of staying on the right path.’

The source also claimed that Adebolajo was in the prison at the same time as Usman Khan, the 28-year-old who killed two people and injured three others in a frenzied stabbing attack by London Bridge last month. 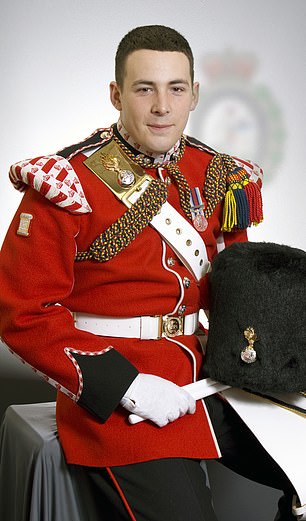 It was last night not clear whether Adebolajo and Khan, who was convicted of a terror offence in 2012 and released halfway through his sentence, did overlap at HMP Woodhill.

A source involved in deradicalisation work told The Mail on Sunday: ‘Prison chaplains and imams were using Adebolajo as an example of someone who has been radicalised.

‘But he has never had any one-to-one mentoring with any prisoners at all.

‘Adebolajo has been in Woodhill since at least six months ago.’

He and accomplice Michael Adebowale ran over Drummer Rigby in a car outside his barracks in Woolwich, South-East London, before hacking him to death with knives and a cleaver.

It was last year reported that Adebolajo had wanted to write a letter of apology to the family of the soldier.

Fiyaz Mughal, founder and director of Faith Matters, said last night: ‘Every scrutiny must be placed to ensure that all avenues are checked and that the Prison Service is not being duped.’

Last night the Ministry of Justice said it could not comment on the story.

One thought on “UK: Headchopper who murdered Lee Rigby’ is now a ‘de-radicalisation mentor’”