Child Sex Abuse Victim: “They Quoted the Quran to Me”…

The Muslim Council of Britain has yet to comment on the greatest scandal of a generation.
Gangs of  Paki & Afghan Muselmaniacs targeted and raped tens of thousands of mainly white girls.
Yet they’re tweeting about ‘islamophobia’ workshops concerning negative press.

Time to disband the MCB!

UK: Cops pull “outrageous” document that said that thinking Muslims were persecuted in UK was sign of “extremism”

It’s clear from the treatment of Muslim rape gangs that Muslims are a protected class in the UK.

Manchester has grooming gangs too. Surprise!

It started in Rotherham, South Yorkshire, where the scandal made headlines in 2012, and where about 1500 victims have since been identified. Then came Rochdale, in Greater Manchester. There followed revelations from Lancashire, Birmingham, Surrey, Leeds, Bradford, and Gloucestershire, with the number of victims in each of these areas numbering in the hundreds or more.

Now an inquiry in Manchester proper has shown that – surprise! – that city isn’t immune to the predations of grooming gangs, either.

Commissioned by Greater Manchester mayor Andy Burnham, the inquiry found that at least 57 girls, many of whom lived in government-run children’s care homes, “were raped and abused by up to 100 members of a Manchester grooming gang sixteen years ago – but despite police and social workers knowing what was happening they weren’t stopped.” The girls, wrote Jennifer Williams in the Manchester Evening News on January 14, “were hooked on drugs, groomed, raped and emotionally broken.” Much of this, moreover, went on “‘in plain sight’ of officials”; indeed, “Greater Manchester Police dropped an operation that identified up to 97 potential suspects,” at least eight of whom went on to commit more assaults, and in August 2018, the city’s Chief Constable “refused to reopen the dropped operation.” At least one of the rape victims, Victoria Agoglia, who “had repeatedly told social workers she was being injected with drugs and raped,” was given no help whatsoever, and ended up dying in 2003, at the age of fifteen, of a heroin overdose, with the then coroner, Simon Nelson, concluding (in the face of massive evidence to the contrary) that “her death could not have been foreseen by the authorities,” and with records showing that Agoglia had, at age 13, been dismissed by social workers as a prostitute. 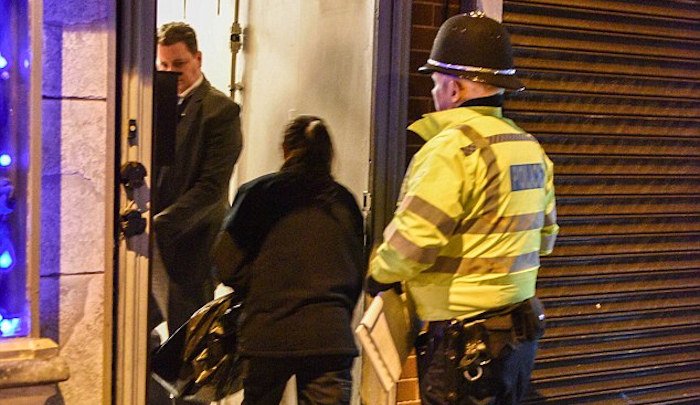 And of course the reason why those authorities did nothing about the abuse of any of these girls was that virtually all of the perpetrators were Pakistani Muslims – or, in the parlance of the British media, “Asians” – and the cops, social workers, child-services officials, politicians, and others were scared of offending the Muslim community. The man responsible for Agoglia’s death, one Mohammed Yaqoob, was cleared of manslaughter charges. Meanwhile, the Telegraph reported that cops looking into the Pakistani Muslim grooming gangs were told by their superiors – who were driven by “fears over race relations,” concern about “sensitive community issues,” and a reluctance to amp up “community tensions” – to leave the Pakistanis alone and instead find and arrest rapists of “other ethnicities.” And they obeyed.

In other words, the story in Manchester is exactly the same as in all the other cities where grooming gangs have, after years or decades, finally been unearthed. Only the names are different (although the perpetrators are often named Muhammed). There is no reason to believe that things are any different in every other city in Britain. Almost certainly, in those cities that have yet to be hit by grooming-gang scandals, the fix is still in.

In response to the release of the Manchester inquiry results, Mabs Hussain, Head of Specialist Crime for the Greater Manchester Police, said: “We accept that authorities fell short of doing all they could to protect and support the child victims of sexual exploitation.” No, the Manchester police didn’t fall short. They stonewalled. They lied. They saw British children being taken off by Muslim men to be drugged and raped and, with a cowardice beyond imagining, turned their back on the victims. When a few brave souls in their ranks tried to investigate grooming gangs, the higher-ups skimped on funding, stalled, shelved findings, caused the minutes of meetings to disappear, and, when they were able to get away with it, actually closed down an investigation of the grooming gangs.

Maggie Oliver, a former Manchester detective who doggedly led that investigation, reacted to the inquiry’s findings by directing a justifiably furious j’accuse at “the people at the top of the police and at social services.” She added: “The chief constable, assistant chief constables, head of social services, the people who knew the facts, who knew the truth and they chose to bury the truth. That, in my opinion, is unforgivable.” And she asked: “why are those people not facing charges of misconduct in a public office? Where is the accountability? They should be put in front of a court of law.”

Indeed. And keep in mind that, like their counterparts across Britain, the Manchester police, while refusing to save children from rapists belonging to a protected minority group, have been zealous in their harassment of citizens who have dared to speak out in criticism of that same group. In 2017, the Times reported that cops across Britain were arresting an average of nine people a day “for posting allegedly offensive messages online” as part of a “campaign to combat social media hate speech”; in addition, over 3,300 people had been “detained and questioned” in 2016 for such offenses. As British journalist Brendan O’Neill noted in Reason in 2018, “This birthplace of John Stuart Mill, this nation that gave the world John Milton and his Areopagitica, still one of the greatest cries for the ‘liberty to utter,’ is now at the forefront of shutting speech down.” Yes, they’re not just going after critics of Islam; they’re also prosecuting people for posting rap lyrics online and for filming dogs making Nazi salutes. But this nefarious new Thought Police activity and the systematic refusal of police to arrest Muslim rapists share an identical motive – a pusillanimous terror of offending Muslims.

What is becoming increasingly, and terrifyingly, clear is that police officers throughout the United Kingdom have been inculcated with a mentality – I would call it a politically correct mentality, except that to call it merely politically correct seems far too tame – that is utterly at odds with the proper role of a police force in a free country: namely, to protect individual freedoms and to combat actual crimes. In true Orwellian fashion, the British police, with a few gutsy exceptions like Maggie Oliver, appear to have been expertly trained not to protect the innocent from the guilty but, quite simply, to prioritize, always and everywhere, the solitary goal of pacifying Muslims.

It is hard not conclude that the British police, as well as other British government functionaries across the board, have accepted the inevitability of their country’s Islamization and view it as the chief task of the police to ensure a smooth transition. Is it too late to hope that Boris Johnson’s government, once Brexit is accomplished, has the will and ability to undo this national nightmare, reverse this betrayal of democracy? Or that the Queen, who plainly views the inane Harry and Meghan situation as a catastrophe, will recognize that her realm faces an infinitely greater menace, and – taking a page from her father and grandfather, who were nowhere near as loath as she is to speak out and exert pressure in moments of crisis – will publicly demand that those who, acting in her name, have betrayed their most fundamental responsibilities, be called mercilessly to account?

Bruce Bawer is a Shillman Journalism Fellow at the Freedom Center.