Londonistan, where Mohammedans gets away with any shiite:

A BARRISTER who butted a junior female colleague has avoided being struck off.

Rashid Ahmed left her covered in blood on the ground after the drunken attack but a tribunal handed him only a three-month suspension.

Ahmed, an immigration law specialist and deputy head of chambers in London, had to be restrained by passers-by.

He was convicted in court of the assault on posh King’s Road in Chelsea, West London, and got a community order.

But the Bar disciplinary panel decided against booting him from the profession after he admitted misconduct.

The tribunal insisted Ahmed was “not a risk to the public”, and had “shown insight”.

The mayor of Palermo in Sicily said that anyone who does not obey the lockdown order will be guilty of mass murder.

There has to be an ultimatum: those who do not submit to French laws will not be able to reside in France. But there’s hardly a politician in France who would see this through. 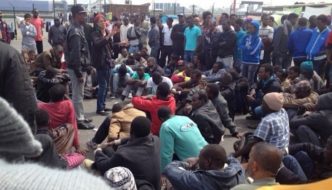 Of course not. That would be unislamic. But above all, it would cause riots, and we can’t have that, can we?

These hospitals are supposed to be filling up with covid19 patients, yet there isn’t a soul around.
Sure makes you wonder what’s really going on.

2 thoughts on “Headbutting Females: how does a Mohammedan get away with it?”