That’s an interesting development. One that calls for jihad, no doubt about it. Shiite terror follows afoot. Burning churches are a regular occurrence wherever Mohammedans have been allowed to settle. This church was set alight by a devout believer who tried to please allah. A massive Christian church outside Indonesia’s capital, where authorities stopped a 2011 Easter bombing plot by Islamic terrorists, was engulfed in flames Monday morning.

No casualties were reported at the Church of Christ Cathedral, near Jakarta.

For the First Time in History of Minnesota, Muslim Call to Prayer Will Be Blasted Over Outdoor Speaker Five Times a Day Throughout Month of Ramadan 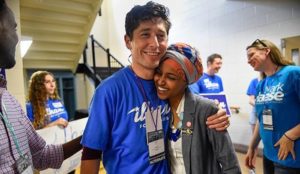 Ilhan Omar is thrilled, and you know what that means: you should be, too. A cultural line has been crossed. According to the Star Tribune, “the Muslim call to prayer will be broadcast the traditional five times a day in the Cedar-Riverside neighborhood of Minneapolis, beginning with the start of Ramadan this week and continuing through the end of the religious holiday in May. It will be the first time the call to prayer, commonly broadcast from mosques in Muslim nations, will be heard in Minnesota.”

This is only supposed to be for Ramadan, but let’s be serious. In today’s Minneapolis, in today’s paradise of multiculturalism, what are the chances that the Cedar-Riverside neighborhood will stop broadcasting the adhan, the Islamic call to prayer, once Ramadan is over? About as good as the chances that Nancy Pelosi will endorse Trump and become his running mate.

Yet the implications of this broadcast call to prayer, beyond the expected hosannas from the usual proponents of globalism and multiculturalism, are ominous.

France: Muslim crushes two police motorcyclists with his BMW, leaves one is in coma, says “I did it for ISIS”

Authorities in Paris on Monday evening arrested a devout Moslem who rammed two police motorcyclists with his vehicle.

A spokesman for the Synergie police union said: “The perpetrator apparently has terrorist motivations which remains to be confirmed.” 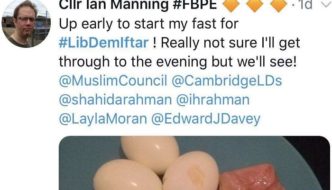 Not very bright, this ‘leftist politician’. But none of them are.