We should tell the UN Refugee Agency to go f*kc themselves. 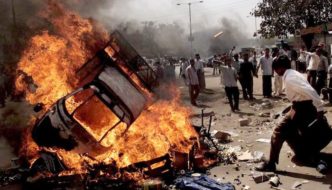 ‘Do not buy from Muslims’: BJP leader in India calls for boycott

Moslems have bad attitudes towards infidels. They are known to infect vegetables with worse things than saliva.

Its Not Buddhists Killing Muslims In Myanmar, Its Rohingya Muslims Killing Buddhists From 1947

That may be so, but the OIC and their leftist fellow travellers keep pushing the lie about bloodthirsty Buddhists who just won’t let the nice little “Rohingya” go about their business. (Jihad)

The Invasion of England

Arrival of asylum seekers in village sparks complaints and compassion Chen a Major General in China’s Liberation Army China ‘appoints its top military bio-warfare expert to take over secretive virus lab in Wuhan’, sparking conspiracy theories that coronavirus outbreak is linked to Beijing’s army
Chen Wei, 54, has reportedly taken the helm of Wuhan Institute of Virology
Her appointment prompted claims that the classified lab is run by the army
One theory suggests Beijing could be making bioweapons in the Wuhan lab
It alleges the virus could have been created there and leaked by accident

Not only is Nigerian president Muhammadu Buhari behind what several international observers are calling a “genocide” of Christians in his nation—but Barack Hussein Obama played a major role in the Muslim president’s rise to power: these two interconnected accusations are increasingly being made—not by “xenophobic” Americans but Nigerians themselves, including several leaders and officials.

What Obama, John Kerry and Hilary Clinton did to Nigeria by funding and supporting Buhari in the 2015 presidential election and helping Boko Haram in 2014/2015 was sheer wickedness and the blood of all those killed by the Buhari administration, his Fulani herdsmen and Boko Haram over the last 5 years are on their hands.

Kerry’s and Clinton’s appeasement of Boko Haram—an Islamic terror organization notorious for massacring, enslaving, and raping Christians, and bombing and burning their churches—is apparently what connects them to this “sheer wickedness.”

For example, after a Nigerian military offensive killed 30 Boko Haram terrorists in 2013, then secretary of state Kerry “issued a strongly worded statement” to Buhari’s predecessor, President Goodluck Jonathan (2010-2015), a Christian.  In it, Kerry warned Jonathan that “We are … deeply concerned by credible allegations that Nigerian security forces are committing gross human rights violations” against the terrorists.

Similarly, during her entire tenure as secretary of state, Clinton repeatedly refused to designate Boko Haram as a foreign terrorist organization, despite nonstop pressure from lawmakers, human rights activists, and lobbyists—not to mention Boko Haram’s countless atrocities against Nigerian Christians.

“Those of you that still love the evil called Barack Obama,” Fani-Kayode added in his post, “should listen to this short clip and tell me if you still do.”  He was referring to a recent Al Jazeera video interview of Eeben Barlow, a former lieutenant-colonel of the South African Defence Force and chairman of a private military company hired in 2015 by Jonathan, when still president, to help defeat Boko Haram.

“In one month,” Barlow said in the interview, “we took back terrain larger than Belgium from Boko Haram. We were not allowed to finish because it came at a time when governments were in the process of changing,” he said in reference to Nigeria’s 2015 presidential elections.  “The incoming president, President Buhari, was heavily supported by a foreign government, and one of the first missions [of Buhari] was to terminate our contract.”

On being asked if he could name the “foreign government,” the former lieutenant-colonel said, “Yes, we were told it was the United States, and they had actually funded President Buhari’s campaign, and the campaign manager for President Buhari came from the US.  And I am not saying the United States is bad—I understand foreign interests—but I would have thought that a threat such as Boko Haram on the integrity of the state of Nigeria ought to be actually a priority. It wasn’t.”

Fani-Kayode was quick to add in his Facebook post that it would have been the priority had Obama not been president:  “I just thank God for Donald Trump,” the former minister said in the same post. “Had he been President of America in 2015 things would have been very different, Jonathan would have won, Boko Haram would have been history and the Fulani herdsmen would never have seen the light of day.”

Fani-Kayode and Barlow are not alone in accusing Obama of “heavily supporting” and “actually funding” a presidential candidate who, since becoming president, has increasingly turned a blind eye to the worsening slaughter of Christians at the hands of Muslims—that is, when not actively exacerbating it, including with jet fighters.  In 2018, former president Jonathan revealed that,

On March 23, 2015, President Obama himself took the unusual step of releasing a video message directly to Nigerians all but telling them how to vote… Those who understood subliminal language deciphered that he was prodding the electorate to vote for the [Buhari/Muslim-led] opposition to form a new government…  The message was so condescending, it was as if Nigerians did not know what to do and needed an Obama to direct them.

Between 2011 and 2015, and supposedly because they were angry at having a Christian president, Boko Haram slaughtered thousands of Christians, particularly those living in the Muslim majority north, and destroyed countless churches. In 2015—and thanks to Obama—Nigeria’s Muslims finally got what they want: a Muslim president in the person of Muhammadu Buhari.

As seen, however, not only did he immediately rescue Boko Haram from imminent defeat, as former lieutenant-colonel Eeben Barlow has now revealed; but atrocities against Christians have gotten significantly worse since Buhari replaced Jonathan—they are now regularly characterized as a “pure genocide”—particularly at the hands of Muslim Fulani herdsmen, the ethnic tribe whence Buhari himself happens to hail.  Thus according to a March 8, 2020 report titled, “Nigeria: A Killing Field of Defenseless Christians,”

Available statistics have shown that between 11,500 and 12,000 Christian deaths were recorded in the past 57 months or since June 2015 when the present central [Buhari-led] government of Nigeria came on board. Out of this figure, Jihadist Fulani herdsmen accounted for 7,400 Christian deaths, Boko Haram 4,000 and the ‘Highway Bandits’ 150-200.”

How and why Fulani tribesman have managed to kill nearly twice as many Christians as the “professional” terrorists of Boku Haram—and exponentially more Christians than under Jonathan—may be discerned from the following quotes by various Christian leaders and others:

Based on all these developments, statistics and accusations, it seems clear that the Muslim president is behind the unfolding genocide of Christians in Nigeria—and Obama helped.

One thought on “The Rohingya, described by the UN as “the world’s most persecuted people””