The Victorian government’s refusal to name the meatworks caused outrage among locals.

The abattoir behind Australia’s biggest coronavirus cluster has outed itself after the Victorian government refused to name it.

Why did it take so long to establish the connection? The moment I heard “slaughterhouse” the alarm bells went on, knowing that just about all meat on Oz is ‘halal’.  Suspicion confirmed. The religion of peaceniks has failed us again.

Halal: How Non-Muslims are Being Forced to Pay for Islamic Expansion

In India, a country known to have a Hindu majority, meat vendors such as Licious and FreshToHome are selling only halal meat to their customer base, despite the fact that it is comprised of Hindus, Christians, Sikhs, atheists, as well as, of course, Muslims.

In the United States, the Mayor of New York, Bill de Blasio, promises the availability of halal food to Muslims, while warning the Jews to cancel any celebrations. This, again, is a country with a majority of non-Muslim citizens.

The abattoir behind Australia’s biggest coronavirus cluster has outed itself after the Victorian government refused to name it.

The Cedar Meats facility in Brooklyn, Melbourne is linked with 34 cases of the deadly disease.

The first case was recorded in early April and a second worker tested positive on April 23, according to 3AW.

The factory closed for a deep clean on Friday and employees, many of whom work in close quarters, were told to get tested.

Nineteen positive results were returned on Sunday, causing Victoria to have its biggest daily total since April 11 when 24 cases were recorded. 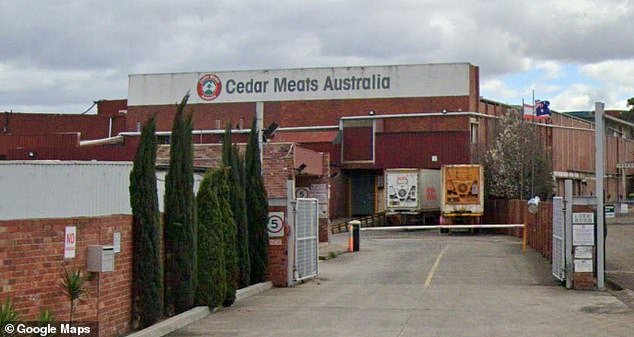 The Cedar Meats facility (pictured) in Brooklyn, Melbourne is linked with 34 cases of the deadly disease

One of the workers at the plant had an operation at Melbourne’s Sunshine Hospital after a workplace accident on Thursday.

He tested positive for the virus over the weekend, prompting around 20 hospital workers to self-isolate.

Cedar Meats General Manager Tony Kairouz said: ‘All workers are self-quarantining and we are working closely with the Victorian health authorities.

The Victorian government’s refusal to name the meatworks caused outrage among locals.

Victorian Transport Association CEO Peter Anderson said the plant should have been named to protect truck drivers who deliver livestock and take away meat.

In a press conference today Chief Health Officer Brett Sutton: ‘It’s not for us to declare that it’s a particular setting.

‘If the meatworks wants to name itself to be clear that it doesn’t involve other places, then they’re free to do so.

‘Naming it is not part of what’s required for us to do our work.’

Meat processing plants globally are proving to be hotbeds for the disease because they have largely remained open despite employees working in close quarters.

In the US, meat factories have recorded 4,900 cases and at least 20 deaths. 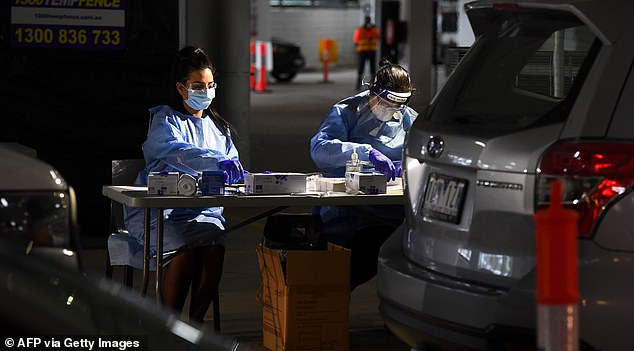 Eateries including McDonalds, KFC, Subway and Pizza Express are international brands, operating across countries of different cultures, and cater to customers of all faiths, but have decided to go halal in many areas in order to court their Muslim buyers exclusively.

If you are based in the Americas, Europe, Australia or New Zealand, and are specifically and explicitly being offered halal meat only, know that you are being deceived and compelled to sponsor the purpose of Islam and its expansion, and could be involuntarily financing jihad in its many forms.

What is halal and Halal Certification?

The halal cut is the only method in which an animal can be slaughtered as dictated in the Islamic texts. The process of killing an animal by following the halal norms is as brutal as it gets; it subjects the animal to a prolonged and painful death, and it is appalling that animal welfare organizations such as PETA have done nothing about it yet.

For the uninitiated, the jugular vein, windpipe, or carotid artery of an alive and healthy animal is pierced and cut halfway through, and the animal is left aside till its body drains out all the blood. A Muslim recites an Islamic prayer during this process, and dedicates the animal or the meat obtained from its slaughter to Allah. This Islamic prayer is known as shahada or tasmiya. Here it must be noted that only a Muslim can perform the act of slaughter.

The finished products then are given a Halal Cerificate, which is a document issued by the Muslim authorities based in the exporting country. The Halal Certification attests that the food product in question fulfills the requirements necessitated by Islamic law for its consumption.

The discrimination rooted in the halal industry

While the progressive world evoked by the liberals can’t stress equality enough, imagine a thriving industry that employs people belonging to only one religion or faith system flourishing among us. Yes, that is the discriminatory world of halal, which is being thrust upon many societies of the world whether or not they have a Muslim majority.

By selling a commodity that has an Islamic prayer recited upon it, and has been dedicated to Allah, the vendors of halal products are imposing Islam on all their non-Muslim consumers.

The multi-million-dollar halal industry thriving on money shelved out by Christians, Hindus, Sikhs and all faith systems including atheists, deliberately, and as a principle, employs only Muslims. If this is not a screaming specimen of discrimination practised by employers, I wonder what is. The halal industry operating in meat- and animal-related products by design and intention denies equal employment opportunity to able and skilful labors, solely for not being the followers of Islam.

This discrimination is not limited to the act of slaughtering the animal alone. As an industry, halal-certified food items go through various rounds of processing, namely, chopping and mincing, washing and cleaning, packaging, labelling, and other logistic services. The Islamic diktat mandates that every individual involved in each of these steps to be a Muslim for the finished product to be considered halal. In other words, it is a well-calculated deceit aimed at concentrating the accumulation of wealth to followers of only one religion.

By throwing their intolerant and insatiable tantrums, Muslims in countries with non-Muslim majorities have twisted the arm of secular systems in their favor. Islamic fundamentalists recognize the shame instilled in the hearts of civilized societies about being tagged Islamophobes, racists, and all other such epithets. They exploit this to the fullest until non-Muslims concede to their unfair demands.

A practice that was initially limited to the processing of non-vegetarian food, the halal monopoly, after occupying massive portions of the markets for non-vegetarian food, has made inroads into the vegetarian domain also. Spices, vegetable oil, cereals and many other grocery products that you may find at your local store bear the halal mark. Though non-Muslims are permitted in the production of these items, the halal certification authority employs Muslims explicitly, and levies a fee for inspecting the food product and issuing it the Halal Certificate. It is a business operation that generates money off all these vegetarian and non-vegetarian products by monopolizing the certification process.

Many Muslims won’t eat anything that’s not halal, while non-Muslims generally don’t care. That is how the entire population worldwide is playing into the hands of the Islamists. Just by buying a sandwich from your regular sandwich shop or preparing a meal for your family, you could be making Islamists wealthy. This wealth can then be invested in the service of Islam, its expansion, its religious ambition of world domination and more.

So non-Muslims may want to consider all the pros and cons before they buy halal.