His crime? He tried to get them to stop looting local businesses.

The Most Disgusting Phenomenon I Have Ever Witnessed

Seeing your country looted, burned, and destroyed by vermin in the name of moonbattery evokes a number of emotions, prominently including rage, sadness, horror, and above all, disgust:

This is maximum cringe. Dumbing down meets Kaepernick.

No Fleccas, you fool. That is how America succumbs to self-hatred and anarchy.

Taking a knee means kneeling in obeisance to Black Lives Matter ideology, in the manner of the washed-up football player who became a leftist militant, Colin Kaepernick. This ideology is rooted in hatred of three things: America, Caucasians, and above all, the police. That’s why Kaepernick attended practice wearing socks decorated with cartoon pigs wearing police hats.

By kneeling to this vile, false, and obviously dangerous ideology, the police are signaling that they have no moral authority to enforce the law because they are the bad guys. They are surrendering.

This is happening throughout the country, just as if coordinated, no doubt on orders from above: in Phoenix, in Philadelphia, in Champaign, in Bellevue, in Des Moines, in Fayetteville, in Schenectady, et cetera, ad nauseam.

Meanwhile, police officers are being shot and run over by cars in the name of the ideology these cops kneel to.

Weakness invites aggression. Submissive gestures do not placate thugs but only serve to encourage them. 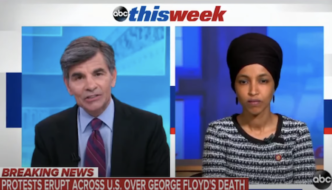 Omar doesn’t say, and Stephanopoulos of course doesn’t ask, why the tanks and the National Guard were there in the first place. They were called out because the rioters she supports were terrorizing innocent people, destroying small businesses (and large ones) that had nothing whatsoever to do with George Floyd, and causing billions of dollars of damage. But Omar knows that victim status is currency in our ridiculous society, the key to gaining genuine power and influence, and she, as a black Muslim migrant, is very, very rich, and avid to get even richer.

One thought on “Murder, dumbing down & taking a knee”