Obamunists went on a looting spree in Chicago in the wee hours of this morning after a young man was wounded in a shootout with police. rioters broke into high-end retailers and exchanged gunfire with police on downtown streets. The authorities closed interstate ramps and raised drawbridges to cut the flow of traffic into the downtown area. Beetlejuice Rejects National Guard in Chicago After Night of Looting…

The liberal establishment tells rioters and looters that they are justified. It rewards their mayhem by hamstringing the police that protects us against them. Surprise: the result is more rioting and looting.

A black youth was wounded after firing on the police in Chicago. A mob of savages assailed the police as they conducted an investigation at the scene.

The event served as a pretext for this:

The Magnificent Mile was looted and trashed.

We are expected to accept this as the new normal. Because Black Lives Matter. 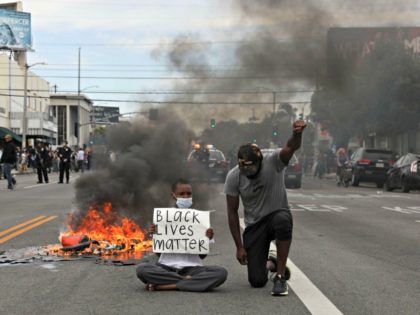 BLM One of the ‘Greatest Threats’ to Black Americans 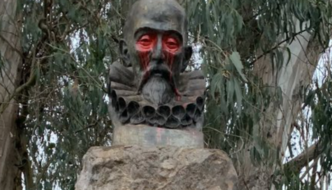 Arabs, Turks and Africans should beg Europeans to forgive them for their atrocities in the very recent past.

In late June, vandals desecrated the monument to Miguel de Cervantes in San Francisco. Thus Cervantes was turned into a “slave owner.”

It is well known that this great writer and brave hidalgo was a slave of the Algerian corsairs for 5 years. They seized him on a ship sailing from Naples to Barcelona.

Cervantes became the property of the cruel Muslim Albanian Dali-Mami, who went by the nickname Lame. The rowers on his ship were white Christian slaves. Being shackled, they ate, slept, and defecated right where they sat. Many of them were missing ears, noses or eyes – the result of Dali-Mami’s outbursts of anger. Once he ordered that a guilty rower’s hand be cut off, and beat the whole team with this hand.

In Algeria, things were not much better. Slave auctions lasted from 8 am to 2 am. Miserable people were forced to run and jump to show their strength and endurance; overlookers cut off their hands for every stolen penny, as prescribed by Muslim laws. Executions, mutilations, torture of slaves were everyday fun for the Algerian Dey. You would see naked people dying in agony under the scorching sun near his house. Wall hooks outside the prison gates were “decorated” with the heads of Christian slaves, being pecked up by kites.

Belonging to a noble famous family saved the life of the writer Cervantes, but fortune was not so favorable to hundreds of thousands of other slaves.

During the four centuries of the Ottoman Empire, the life of white Christians in the coastal cities of Europe turned into a hell.

Pirates of Hayreddin Barbarossa (Hizir-reis), who was Sultan Suleiman’s vassal, freely reigned in the “Turkish lake” (the Mediterranean Sea). It is difficult to describe the horror in which the inhabitants of Spanish, Italian and Sicilian villages lived. Berbers usually came at night, when people were sleeping. Breaking into houses, they murdered old people and captured young men and women, girls and boys, who were valuable commodities at slave markets. As a rule, after a “successful” raid, the whole village or the entire city was burnt.

Women, teenagers and children were destined for the sexual pleasure of their captors. In the paintings of artists of the 17th-19th centuries, such as Jean-Leon Gerôme’s “The Slave Market” or Giulio Rosati’s “Inspection of the New Arrivals,” one can often see a wealthy sheikh examine and touch a European woman standing in front of him as his servant carefully measures her and the owner is bargaining briskly about the value of “live goods.”

Masses of white slaves entered gigantic slave markets of Algeria, Constantinople (Istanbul) and other large cities of the conquered Byzantine Empire. Those marketplaces (“Esir” or “Yesir”) were established by Sultan Mehmed II and were located in most towns and cities of the Ottoman Empire. The French traveler of the 16th century Nicolas de Nicolay described them as gigantic accumulations of naked, submissive and frightened people, who were mockingly touched, examined, patted on the stomach, back, sides and buttocks, like cattle, by visiting merchants and local wealthy townspeople.

According to a professor of history from Ohio State University, Robert Davis, from the beginning of the 16th century to the middle of the 18th century, they enslaved up to 1.25 million Europeans in North Africa.

The raids and captures of white slaves were well-planned military operations. In 1544, Hayreddin captured the island of Ischia, having taken 4,000 prisoners. After that he enslaved about 5,000 inhabitants of Lipari. In 1551 Turgut Reis, yet another barber corsair, enslaved the entire population of the Maltese island of Gozo, about 6,000 people. All of them were sent to Ottoman Tripolitania. In 1554, he destroyed the town Vieste in the Apulia region. 5,000 of its inhabitants were beheaded, ISIS-style (Islam is a religion of peace, isn’t it?), and 6,000 (mostly women and children) were turned into slaves. In the next year, he burnt Bastia in the north of Corsica and enslaved 6,000 locals. Today you can see the majestic monument of Turgut Reis and Barbarossa in Istanbul. Why is that one not being targeted by those who are pulling down statues?

Aeolian Islands, Amalfi, Massa Lubrense, Cantone and Sorrento, Torre del Greco, the coasts of Tuscany, Piombino — there was practically no place on the coast of Italy where the earth was not saturated with the blood and tears of victims of the corsairs.

Many coastal regions of Europe were completely depopulated. Not a single European country, even the most remote ones, felt any safety. In June 1631, Murat Reis captured Baltimore in Ireland: all the people there were taken to North Africa. Men were turned into galley slaves; women became sex slaves of sheikh and emirs. For the Berbers, red-haired Celtic girls were an exotic delicacy.

Even Iceland was plundered: İzlanda seferi was a series of raids into this country in July 1627. Since old or sick people had no value in the states of the Barbarian Coast, they were locked in churches and set on fire. One of the few who managed to return from captivity — the priest Olaf Egilsson — later wrote a book about these events.

In 1886 (back then, fortunately, the world didn’t yet know about political correctness), the New York Times described the trafficking of girls and women from the Caucasus, Syria and Nubia. Caucasian Christian girls were considered especially beautiful —  fair-skinned and therefore expensive. They cost up to 500 lira and were often bought as gifts for Ottoman nobles or officials.

For centuries, the Crimean Khanate (vassal of the Ottoman Empire) raided the territory of Russia, the Balkans and Eastern Europe. This was known in history as “harvesting of the steppe.” On average, the Crimean Tatars took into slavery 10 thousand people per year from these lands. From 1468 to 1694, about two million Russians, Ukrainians and Poles were driven into “jasyr.” The slave trade in Kaffa (now Feodosia) stopped only after the Crimea was conquered by Catherine II in 1783. That was only 250 years ago.

Isn’t it time now to erect monuments to these millions of unfortunate people?

And the last, but most important thing. The Ottomans, Arabs and Berbers renounced slavery not by their own good will, but under the guns of American, British and Dutch frigates. It was one of the most glorious human rights victories in the world history.

Alexander Maistrovoy is the author of “Agony of Hercules or a Farewell to Democracy (Notes of a Stranger),” available at Amazon and Barnes & Noble.