There is no reason in the world WHY Europe should work towards its own demise by  accommodating  invading savages
They should all be sent back home to sort out their own countries.

About 400 migrants remain stranded aboard several rescue vessels in the central Mediterranean as international aid groups urge European officials to let them come ashore.
.
The British street artist Banksy has accused European officials of ignoring maritime distress calls from non-Europeans after he helped fund a rescue vessel to assist migrants stranded in the central Mediterranean for days.

Authorities on the Italian Mediterranean island of Lampedusa are calling for urgent help after mass migrant arrivals over the weekend pushed its hotspots to the brink of collapse.

“Either the government takes immediate decisions or the whole island will go on strike. We cannot manage the emergency and the situation is now really unsustainable,” he said.

Around 370 migrants disembarked on Saturday night on the southern Italian island.

Their boat was spotted off the coast by the Italian Coastguard and was at risk of sinking due to strong winds.

The migrants, whose nationality is not yet known, disembarked in small groups before undergoing coronavirus tests and being transferred to a reception centre.

Another 500 migrants arrived on the overburdened island on Friday on “around 30 small boats mainly from the Tunisian coast”, news agency AFP said quoting Italian media.

“Sicily cannot continue to pay [for] the indifference of Brussels and the silence of Rome”, he said.

The decision was later overturned by a local administrative court (TAR).

Before Dan Rather disgraced himself as the anchor of the CBS Evening News, there was Walter Cronkite, who paved the way for a communist takeover of South Vietnam and openly despised and attacked President Ronald Reagan’s peace-through-strength policies. Cronkite, who became an advocate of world government and a stooge of Soviet propaganda operations, is now the subject of a campaign to put his likeness on an official U.S. postage stamp.

The terrible truth about Walter Cronkite, as we noted in 2009 after his passing, is that he “symbolized liberal media bias and used that bias with disastrous consequences for our nation and the world.”

Hundreds of migrants were transferred to several rescue ships on Saturday as international aid groups urged European officials to let them come ashore. One of the vessels, the Louise Michel, was funded by Banksy.

According to a series of posts on the Louise Michel’s Twitter account, the ship set out on Thursday to help 89 people on a rubber dinghy. During its mission, it came across another ship with about 130 people, who were also rescued. At that point, with more than 200 people aboard, the Louise Michel’s crew of 10 could no longer steer the ship because of overcrowding on its deck and issued a distress call.

The ship was near Lampedusa, an Italian island off the African coast that has become a gateway to Europe for many migrants. The Italian Coast Guard, responding to the distress call, said it had taken in 49 passengers it considered the most vulnerable, as well as the body of a migrant who had died before being transferred to the Louise Michel.

Around 150 more migrants were moved to the Sea-Watch 4, a humanitarian ship that already had about 200 rescued migrants onboard and was itself in search of a port. An additional 27 migrants from Libya, including children, have been onboard the commercial vessel Maersk Etienne for more than three weeks.

Banksy posted a video of the rescue mission on Instagram on Saturday that showed images of migrants in distress, overlaid with the words “Like most people who make it in the art world, I bought a yacht to cruise the Med.” It continued, “It’s a French navy vessel we converted into a lifeboat because EU authorities deliberately ignore distress calls from ‘non-Europeans.’”

The Louise Michel, a former French patrol boat, has the word “rescue” emblazoned on it in bright pink and features a Banksy painting of a girl in a life jacket stretching her arm toward a heart-shaped safety buoy. The image resembles the artist’s “Girl with Balloon” stencil murals.

The vessel set out from the Spanish port of Burriana on Aug. 18 and has been carrying out rescue missions in the central Mediterranean since Thursday.

On Sunday, after the decks of the Louise Michel were emptied, the crew of European activists urged European Union member states to open their ports to the migrants. “The struggle of the survivors is not over,” they wrote on Twitter.

Ships operated by charities often provide the only search-and-rescue operations in international waters, where small boats packed with people try to cross the Mediterranean to reach Europe. More than 100,000 attempted the voyage last year, and at least 1,283 people died, according to the International Organization for Migration.

The United Nations refugee agency and the International Organization for Migration issued a joint statement on Saturday calling for European officials to allow more than 400 migrants onboard the various rescue vessels in the central Mediterranean to come ashore.

“A commercial tanker cannot be considered a suitable place to keep people in need of humanitarian assistance or those who may need international protection,” the agencies said in their statement, referring to the Maersk Etienne. The lack of a regional agreement, the statement continued, “is not an excuse to deny vulnerable people a port of safety and the assistance they need, as required under international law.”

Migrants in the Mediterranean

Hundreds of Migrants Stranded in Mediterranean in Standoff Over Aid Ships
Aug. 12, 2019 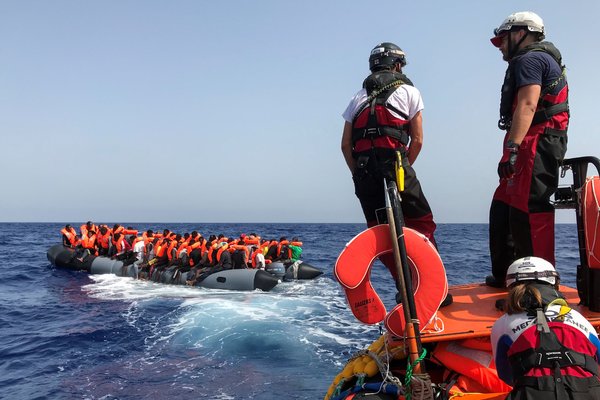 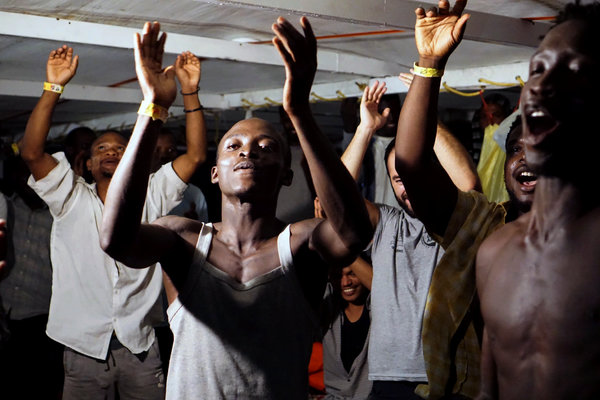 Ceylan Yeginsu is a London-based reporter. She joined The Times in 2013, and was previously a correspondent in Turkey covering politics, the migrant crisis, the Kurdish conflict, and the rise of Islamic State extremism in Syria and the region.

2 thoughts on “Covid or not, the invasion continues”