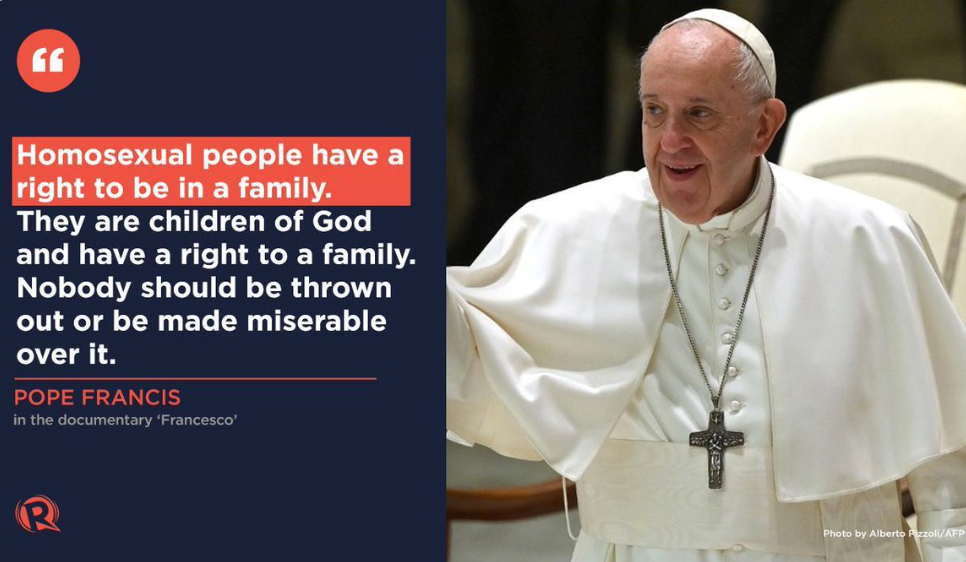 Gay couples deserve legal protections for their relationships, Pope Francis said in a new documentary. Also in the film, which premiered in Rome on Oct. 21, less than two weeks before the U.S. presidential election, the pope condemns the Trump administration’s child separation policy at the U.S.-Mexico border, which he calls “cruelty of the highest form.”

The filmmaker, Evgeny Afineevsky, asked Pope Francis during an interview for the documentary about the place of L.G.B.T. Catholics in the church. Francis reemphasized his belief that L.G.B.T. people should be made to feel welcome in the church.

“Homosexuals have a right to be a part of the family,” the pope said. “They’re children of God and have a right to a family. Nobody should be thrown out or be made miserable because of it.”

“Homosexuals have a right to be a part of the family,” the pope said. “They’re children of God and have a right to a family. Nobody should be thrown out or be made miserable because of it.”

But Francis said for the first time as pope that gay couples deserve legal recognition for their relationships.

“What we have to create is a civil union law,” he said. “That way they are legally covered. I stood up for that.”

Before he was elected pope, Francis served as archbishop of Buenos Aires, and in that role, he advocated for same-sex civil unions in an attempt to block a same-sex marriage law. Argentina legalized same-sex marriage in 2010, which then-Cardinal Jorge Bergoglio called a “destructive attack on God’s plan.” But in meetings with other Argentine bishops, Cardinal Bergoglio urged them to support civil unions as a way to keep marriage distinctly heterosexual. Bishops rejected the idea, but an L.G.B.T. activist in Argentina said the cardinal called him to say he personally supported the idea of civil unions. The comments in this new documentary represent his most public declaration of support for same-sex unions since becoming pope.

As pope, Francis has urged a more welcoming church for L.G.B.T. people, beginning with his response to a question in 2013 about gay priests, “Who am I to judge?” He has met with L.G.B.T. Catholics throughout his pontificate, and though he has issued repeated warnings against what he calls “gender ideology,” Pope Francis has urged Catholics to focus on the humanity of L.G.B.T. people. Juan Carlos Cruz, a survivor of clergy sexual abuse who clashed with church leaders over the pope’s handling of sexual abuse in Chile, has developed a friendship with Francis. In the documentary, Mr. Cruz says he has discussed his sexuality with the pope, who told him, “God made you gay. God loves you like you are and you have to love yourself.”

The film, “Francesco,” also focuses heavily on human rights, an issue Mr. Afineevsky covered in his previous films, including the 2017 documentary “Cries from Syria” about the country’s devastating civil war. In a section on the rights of migrants, Pope Francis condemns the Trump administration policy of separating families trying to enter the United States illegally.

One thought on “Homo Promo From the Vatican?”