Since a couple days after November 3rd, Election Day in the US, more than 100 of 243 Dominion Employees have deleted their profiles on LinkedIn.

This is not a good sign for a company.  Over 40% of Dominion’s employees with profiles on LinkedIn on Election Day in the US have eliminated their profiles from the social media giant. Rosie Memos @almostjingo reported this yesterday: What a whiny bitch this guy is!

US Senator Richard Blumenthal nagged Facebook chief Mark Zuckerberg to ban Steve Bannon from the social-media platform and boost efforts to stop disinformation, only to be reminded on Twitter of his lies about fighting in Vietnam.

Speaking remotely at a Senate hearing on Tuesday, the Connecticut Democrat referred to a November 5 podcast in which Bannon, formerly President Donald Trump’s chief strategist, said he would like to put the heads of Dr. Anthony Fauci and FBI director Christopher Wray “on pikes” as a warning for other bureaucrats to “get with the program or you are gone.” Twitter permanently shut down Bannon’s account, and Facebook censored a video of the podcast, but Zuckerberg stopped short of banning the Trump ally altogether.

“How many times is Steve Bannon allowed to call for the murder of government officials before Facebook suspends his account?” Blumenthal asked Zuckerberg.

In Trump's 2nd term, I would like to see him dismantle the CIA, FBI, HLS and IRS. All of them are politicized and corrupted. New agencies could be combined and include the US Marshals. https://t.co/XWhz7zrNMk

Sidney Powell has said multiple times that this level of fraud would not be possible without the CIA being involved. Read that again. What a massive statement. We’re literally in a war against our own intelligence agencies, right now. Unprecedented and absolutely terrifying.

The world is still round, Donald Trump is still President 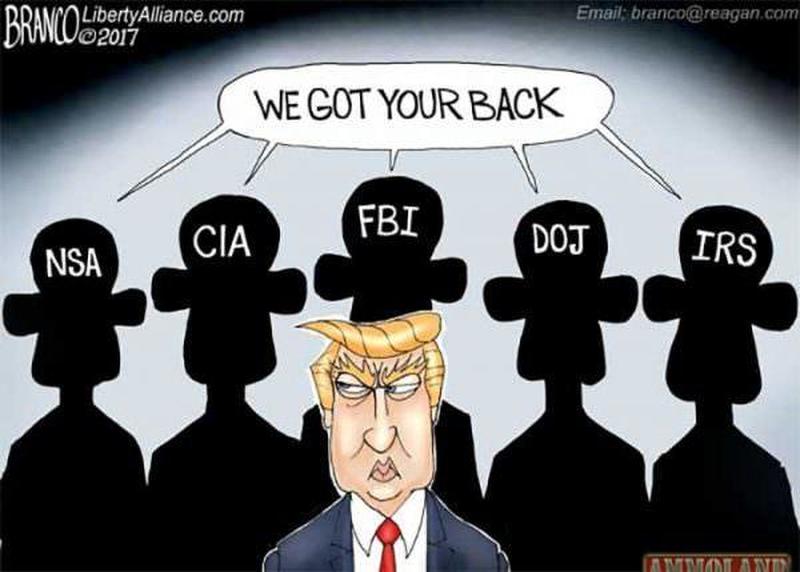 Repeat after me: ‘There is no evidence of voter fraud’, ‘no, no, no, you are not to use the term alleged voter fraud’ you must categorically repeat ‘There is absolutely no evidence of voter fraud’, and as incredible as it may seem newsrooms all over the United States and all over the world maintain there is NO VOTER FRAUD. The cable news stations also, say it out loud, the most famous news anchors that once had a proud reputation and the trust of the nation, now repeat ‘there is no evidence of voter fraud’. And just to emphasize it further, the crawl along the bottom of our screens lets you know once again there is no evidence of voter fraud. The only problem is there is actual and overwhelming evidence of voter fraud in this election.
My point is that even here in Australia, our major news services are repeating that there is no evidence of voter fraud. Am I the only one that finds this absurdity strange? We are actually being told what to believe instead of allowing our own minds to aggregate and filter information for ourselves. The fact that this perverse mind-numbing indoctrination has reached this level of absurdity not to mention critical mass is scary.
.
I’ve always been an independent thinker, but if the world was telling me one thing and I believed another, I took the time to examine my beliefs. Doing so now just scares the bejeebers out of me.
.
Forget the facts for a moment. Credible, educated lawyers are presenting the very evidence that does not exist to courts and judges as we speak. There are realms of affidavits attesting to voter fraud, but forget that for just a moment, how do we hear from previously credible news organizations this lie, this propaganda worthy of Stalin, this information that can easily be discredited (at least for now) on Google. How on earth in this day and age of freedom and democracy does a lie denying the existence of facts and eradicating the basic fundamental right to an alternative view, how does this lie spread and have so many high-profile networks disseminating it?
.
This is not a conspiracy theory. We can all see and hear the truth of it on our own communication devices no matter what we use. We also know and can verify evidence of voter fraud – this is happening in real time. We are being told to believe what we are told, not what we know to be true. It’s like when everyone believed the world was flat and now, we know it is round because there was evidence to convince us of truth. Lots of folk did not want that whole earth is flat thing to change, but those with the truth persevered and it is now irrefutable. So, it is happening with the results of this 2020 election. There is truth and there is evidence, why and who is trying to turn our world upside down?
.
I don’t want to go into the realm of conspiracy theory, I would much rather you realize the fact that there are forces at work undermining your confidence in your own common sense. Even if you are a staunch Never Trumper and adore Joe Biden, do you really believe there is no evidence of voter fraud in this election? Rather than try to convince you with the overwhelming evidence, I want you to just embrace the fact that the real issue here is that we are being lied to on the biggest and grandest scale ever imagined.
.
How does it feel to realize what you are being told from what was once news sources that you must accept what they repeatedly tell you without allowing your own common sense to enter this narrative?
.
I just read a wonderful, simple story of a family that escaped the holocaust and their experiences through both Russia and Poland as the Nazis came into power, The Freedom Circus, by Sue Smethurst. I would suggest you read it to get even a small inkling of what it is like to live in a world where your thoughts have to be monitored for your survival. It is an insight into a simple story that alerts you to how different your life is when someone else dictates what you are and are not allowed to think even to yourself. Read it so you appreciate how lucky we are to live in democracies, read it to understand why people flock to live in Democracies both legally and illegally. Read it to realize why this current fairy tale you are being told by everyone that repeats there is no evidence of voter fraud in this election is bone-chilling.
.
Lily Steiner is an active member of the community, radio host on www.J-Air.com.au and lifelong advocate for Israel. She is an entrepreneur and Founder of American Business Gateway. Lily specializes in out of the box thinking to improve revenues in businesses and works with companies, individuals and corporate entrepreneurs.
.
1/ Getty Images