This time they were ready — because there was too much at stake. 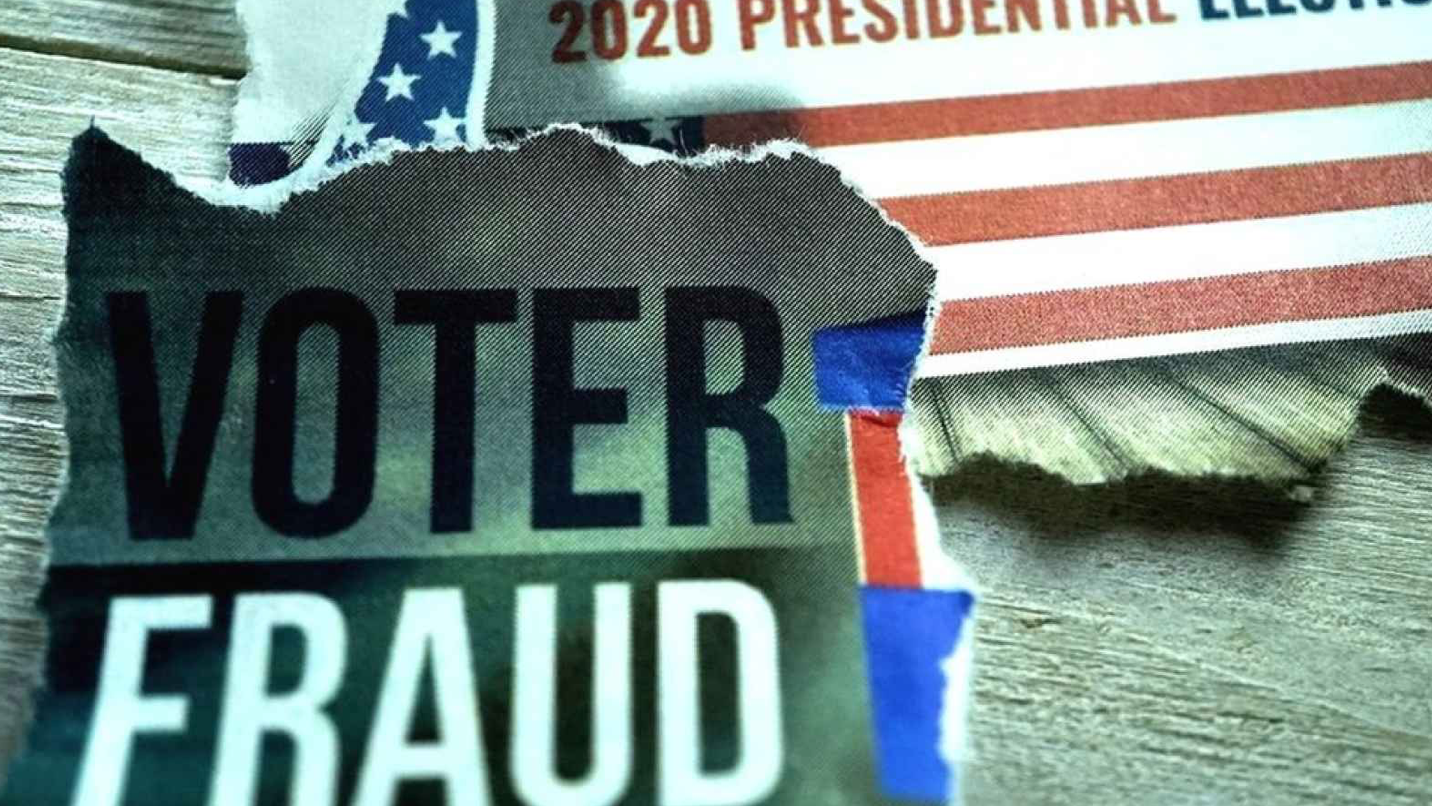 Looking back at the unusual election we just had, and viewing it in the context of political events going back 150 years, it’s clear that the Democrats had no choice but to rig the presidential election — and, now, they’re going for all the marbles.

In the last weeks of the presidential campaign, Donald Trump was drawing tens of thousands of enthusiastic supporters several times a day, and people across the land, and at sea, formed massive rallies and caravans of their own. Meanwhile, the Biden camp was barely limping along, with one or two funereal gatherings a week, before, at best, a few dozen people (sometimes, overwhelmingly outnumbered by Trump supporters); the campaign’s apparent strategy was to minimize the candidate’s exposure (and let the media do the work for them) — not only because the candidate was feeble and the campaign advocated lockdowns, but also because evidence began emerging of the Biden family’s dealings with foreign oligarchs and corrupt countries — most importantly, Communist China.

So, as election day approached, things were looking good for the president. Indeed, as the results came in on election night, the president was headed for re-election. He was ahead in the electoral college, and had big leads in the handful of remaining states he needed to win.

Then, suddenly, the counting stopped. Late at night, five decisive states announced at the same time that they stopped counting. Has the counting of votes ever stopped on election nightin any election, let alone a presidential election? It’s as if, with a couple of minutes left to play in a basketball game, one team is way ahead and “running away with it,” and the other team is down and dejected, staring defeat in the face; and all of a sudden, the referees stop the game for the first time ever, and for no stated reason. Then they send the team that’s winning, home, blindfold them, and tie their hands; leave the trailing team on the court by itself, with control of the scoreboard and the keys; and ask them to send in the final score, whenever they want. If there were fans in the stands, they’d yell, “How much they payin’ you, ref?”

In hindsight, though, maybe we should have seen this coming because a “perfect storm” of major forces and trends came together to make sure that Joe Biden and the Deep State would not lose.

The most pressing concern was the Biden family. Their pipeline to funds from around the world had been exposed, and was now threatened, and if the country’s chief law-enforcement officer (who’d already “blown the whistle” on the family’s criminal dealings) continued in that job, members of the Biden family, including “the Big Guy,” would be at risk of criminal prosecution. As far as the Bidens were concerned, and quite a few other powerful players too, that simply could not happen. Nor was it only a matter of graft. Being “on the take” from Communist China meant that Joe Biden had “sold out” the country to the ascendant global power, and was unlikely to be working solely for America’s interests; awareness of that could not be allowed to see the light of day — such knowledge, and further probes into the family’s dealings with foreign oligarchs and corrupt countries, especially Communist China, had to be crushed. In addition to the Bidens, there were other crime families, and countless crooked “politicians,” at risk of being exposed, of having their livelihoods threatened, and of being criminally prosecuted. Nobody wants that.

A more significant factor at play was the Deep State. The Swamp rats had been drawn out of the sewers, for all to see. Their unchecked leeching off the country, and their growing grip on society, were being questioned, and might even be checked. The rats wanted to get back to chomping as before, and they were supremely confident they could do it; for, even after the lights were turned on, they still got away with success after success — with almost no legal, financial, professional, or political consequences. And it’s an impressive roll call of accomplishments: spying on domestic presidential campaigns (not only Donald Trump’s, but Ted Cruz’s and Ben Carson’s too); sabotaging a presidential transition and administration; fabricating tales of treason and foreign control of the president (and, with the media in tow, having half the country believe it, and believing so much more); an endless string of preposterous and farcical charges and investigations (on the public’s dime); and attempting to cripple the country — all of which profoundly affected the political process and the country’s elections. And all of that, after eight years of politicizing and corrupting the I.R.S., the Drug Enforcement Administration, the F.B.I., the Justice Department, the judiciary, the intelligence services, and the military — with a corrupt and fawning press, covering everything up, instead of shining a light.

Joining the Deep State were the media, Big Tech, schools, and entertainment — most of them, in bed with Communist China, and wanting to maintain the marriage of convenience, undisturbed. So, when the president drew attention to the doings of the Swamp and China, they all turned their guns on the only thing that stood in their way; and they proceeded to thoroughly malign and demonize the president, members of his family, his associates, and half of the country — with the other half, lapping it up. And having recently succeeded in other demonization campaigns, and passing off an America-hating Marxist on the country, the Democrats and their allies knew they were dealing with a politically illiterate and naive nation, which meant they could pull off anything they wanted, with no risk to themselves and the rest of the Swamp — they were invincible.

With all of that in mind, why should the Swamp rats “stay in the closet” and operate in the dark — far easier, quicker, and cheaper to be direct and up-front, and the effect on the citizenry would be more powerful and long-lasting. Why play “cloak and dagger,” when you can hit them with a sledgehammer, and pound them into submission. For the Democrats and the Deep State, drunk on victory and confidence, and bolstered by a sense of moral superiority and entitlement, a little election tomfoolery was a necessary and logical next step — everything else had succeeded (“If it ain’t broke, don’t fix it”) — just another coup attempt — and one that would finally finish off the job. Nothing’s going to happen to them — nothing ever does. So they were going to dare the country — “Prove it!” — and they may not even have feared being taken up on the dare. They would show what they can do, who’s really in charge, with a demonstration of power politics at its rawest — and “You will like it!” As every dictator knows, the ultimate goal is for people to believe the lie; and to make that happen, the propaganda organs have to repeat the lie enough times, until the public doesn’t know any better. Which brings to mind Groucho Marx’s line “Who you gonna believe — me, or your lying eyes?,” and the media’s polar-opposite depictions of the support for Trump and Biden.

In addition, the public had become a bit of a nuisance.

Had forfeited the confidence of the government

And could only win it back

By increased work quotas. Would it not in that case be simpler for the government

To dissolve the people

So, the people needed to be taught a lesson — for good. Our Deep State had simply lost its patience with the electorate — you’ve had your bit of fun (as Mark Steyn puts it) — never again! Don’t you know, “You can’t fight City Hall” — don’t even think about it. Just leave us alone, to go about our merry ways, and resume our Marxist revolution and the march towards government as the ultimate arbiter of all things. Why, it may not even be necessary for the people to “get” the lesson — just take the choice out of their hands. Joseph Stalin reputedly said, “It is enough that the people know there was an election. The people who cast the votes decide nothing. The people who count the votes decide everything.”

And with big-city machines ready to do what they do best (maybe the best part of the Democrats’ game, since at least the 1860s — aided, now, by the mail-in games), the Democrats and the Deep State knew exactly what had to be done; the way to safety, and possibly a final solution, was in plain sight — simple and assured — irresistible — and, again, with no likely consequences. They’d gotten away with so much worse — what’s a little manipulation of the votes.

Finally, as Scott Adams points out, in addition to opportunity, true believers had motive on their side — and what a motive: to remove the equivalent of Hitler from power. And there were certainly enough people willing to commit crimes to make that happen, and confident they could get away with it — they’d done it before.

And, now, for the coup de grace, the Democrats have Georgia on their mind — with two Senate seats to be had. And with control of the Senate, come two new states, a few more Supreme Court seats, and…“Good night, Irene!” As Chuck Schumer, the potential leader of the Senate, put it, “Now we take Georgia, and then we change the world” — which makes Atlanta the next stop on the Great Heist Train.

So, this year, the Democrats would take no chances — they wouldn’t make the same mistake the stunned Hillary camp made to the shocking results on election night, four years ago. This time, they were ready — because there was just too much at stake.

The Great Reset is not a plot device out of a James Bond movie. This scheme to exploit COVID-19 hysteria and the global warming hoax to “revamp all aspects of our societies and economies,” as mastermind Klaus Schwab puts it, is quite real. John Kerry, who has been making a career out of treason since at least 1971, is just the traitor to help Joe Biden impose it on the United States.

The Great Reset must be imposed quickly, before resistance can get organized, and while the ChiCom virus has most of the population in a mindset of meek compliance with arbitrary tyranny.

That is, the Great Reset is already underway in this country, as of Biden’s alleged election. The first step was mobilizing Big Tech, Big Media, and the rest of the liberal establishment to put someone in the White House willing to subordinate American interests to an authoritarian globalist conception of utopia.

The notion that pompous bureaucrats can prevent the climate from fluctuating is preposterous, but the evil they plan to inflict in the name of this hoax is genuine.

Kerry’s use of the word “inequity” should send chills up the spine of anyone who wants to live free. The Great Reset solution to the supposed problem of inequity is effectively the same brand of authoritarian oligarchical collectivism that Lenin and Stalin imposed on Russia and Mao imposed on China, killing tens of millions, and impoverishing and enslaving everyone who survived save the ruling clique.