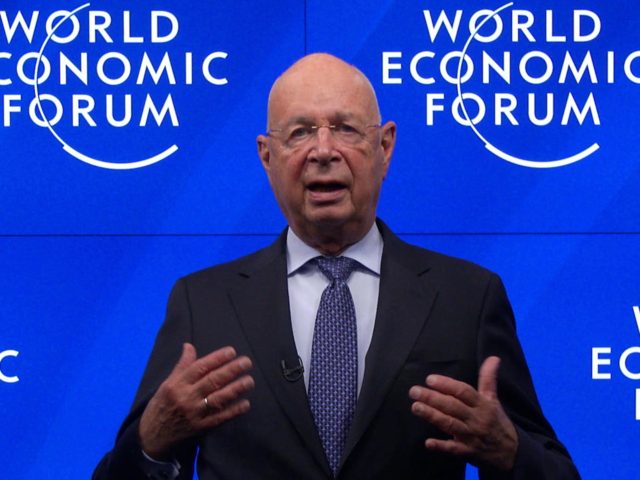 The World Economic Forum (WEF) faced a barrage of criticism before deleting a social media video which praised coronavirus lockdowns for “quietly improving cities around the world”.

In the video, the WEF said that as a result of people using less public transport and factories closing down during the lockdown, noise and air pollution fell in cities throughout the world. The video also celebrated the ability of scientists to discover earthquakes due to the low level of seismic noise on the planet as populations were locked in their homes.

Deindustrialisation, decommercialisation is the plan. The Agenda 21 is already here. From here on towards Agenda 30. With a bullet!

Get up to speed on the Great Reset

.
You’ve no doubt heard about the socialist-corporatist hybrid plan known as ‘the Great Reset’. The plan is being pushed by the World Economic Forum, run by James Bond villain lookalike Klaus Schwab (pictured above), and covers everything from the elimination of private property (for everyone but the corporations and oligarchs of course!) to the fusion of humanity with artificial intelligence. I kid you not.
.
In a recent Epoch Times opinion piece, it was pointed out that the imposition of the Great Reset – a major reworking of the global economic structure – would likely be done by force and centralised power. The writer said that:
“The last century has shown that centralized power always ends in totalitarianism sustained by violence. Every nation that has adopted this model of amoral governance has ended in poverty, tyranny, or both. Think the Soviet Union, Cambodia, China, and Cuba. There are no exceptions. If the WEF does away with prescriptive moral principles, the results will be no different.”
.
On Sky News, Rowan Dean has been warning of this for some time, stating that the Great Reset was really just a plan by the new oligarchs to “control every aspect of our lives”. Similarly, former Senator Cory Bernardi, now also a Sky News host, has warned that the Great Reset is really a plan by “leftist elites” who want to dictate how you live your life.
.
It is not just folks from the Right saying that the Great Reset plan will make for a frightening future. Well-known identities from the Left such as Naomi Klein and Russell Brand have criticised the Great Reset, with Klein labelling it “insidious”.
.
Everyone must get up to speed with this globalist plan that seeks to fuse socialism and corporatism and embed it permanently into our economy and society. If you’re up for it, read this five-part primer on the Great Reset by the Mises Institute (with options to listen to some of the articles as well):
What Is the Great Reset? Part I: Reduced Expectations and Bio-techno-feudalism;
The Great Reset, Part II: Corporate Socialism;
The Great Reset, Part III: Capitalism with Chinese Characteristics;
The Great Reset, Part IV: “Stakeholder Capitalism” vs. “Neoliberalism”; and
The United Nations and the Origins of “The Great Reset”.

.
The “Great Reset” continues:
.
The WEF, which the primary body pushing Klaus Schwab’s idea of a so-called ‘Great Reset’ of the global economic order, was widely ridiculed for the post, including by former Brexit Party MEP turned political commentator Martin Daubney, who was among the first to flag the video before it was taken down. Daubney later reposted the video, further exposing the WEF to criticism.

Speaking to Breitbart London, Mr Daubney said: “I’m glad they tweeted this — because it has exposed them for the out of touch crackpots that they are. The WEF sees humanity as a blight, something to be controlled and imprisoned, in order to meet arbitrary climate change targets.

“There’s just one problem, the public won’t play along with their Great Reset nonsense. All of the things the WEF want to stop: work, travel, capitalism, are the things the vast majority of humanity lives for. The WEF have exposed themselves as ridiculously out of touch with the everyday man and woman. Sheltered in their ivory towers, they treat the rest of us with absolute seething contempt.”

Mr Daubney went on to say that the WEF should be kept well away from being able to “pull the levers of power in any country around the world.”

“The WEF would rather we were imprisoned and carbon-neutral, and that is a grisly future that no sane human should want any part of,” he added.

This is the tweet the @wef deleted, saying “lockdowns are quietly improving cities”

Lockdowns have destroyed cities, lives & economies. Yet climate change zealots see them as tools of control

These unelected cranks must NEVER be allowed near policy

I didn’t know the “Earth’s seismic noises” were a thing.
.

Following the social media backlash, the World Economic Forum deleted the video from their account, and attempted to walk back the sentiments expressed in the slickly-produced film, writing: “We’re deleting this tweet. Lockdowns aren’t ‘quietly improving cities’ around the world. But they are an important part of the public health response to COVID-19.”

Commenting on the WEF deleting the video, Mr Daubney said that the fact that the Davos-based NGO didn’t see the backlash coming “proves how divorced from reality they are. They have no understanding of the everyday workings of the general public,” who he said “just want to work, prosper and enjoy life.”

“This moment has been a rude awakening for the WEF, having, at last, popped its head out of its echo chamber. Yesterday they were telling us to have our COVID-passports ready before we leave our bunkers. Now they are telling us we had better not pollute once we leave!”.

Brexit’s Daubney also noted how Schwab wasn’t the only dubious character given a shot in the arm by the pandemic. The reemergence of former British Prime Minister Tony Blair during the pandemic has seen his globalist charity, the Tony Blair Institute for Global Change, partnering with the WEF to develop an international vaccine passport.

“Tony Blair has gone from being a war criminal to pulling the strings behind the UK’s COVID passport rollout. He’s absolutely in bed with the WEF and we are increasingly seeing them as a cabal of out of touch millionaires who have literally no idea how ordinary people think and live,” Daubney said.

'The Great Reset' is upon us. French President Macron declared that in the wake of the Chinese coronavirus modern capitalism "can no longer work" at the Davos summit. https://t.co/VaxyGB2VJe

The World Economic Forum has long expressed its intentions to dismantle the modern capitalist system, arguing for the adoption of more socialist-style policies such as wealth taxes, onerous regulations on businesses, and taxpayer-subsidised Green New Deal-style projects.

In a 2016 video, the WEF predicted a ‘happy’ future in which individuals no longer owned property.

In June of last year, Klaus Schwab, the founder and executive chairman of the World Economic Forum said that the Chinese coronavirus was an opportunity for global governments to introduce a “Great Reset of capitalism“, saying that the “world must act jointly and swiftly to revamp all aspects of our societies and economies.”

3 thoughts on “Get up to speed on the Great Reset: ‘Trussst Usss! We’re Not Evil’”