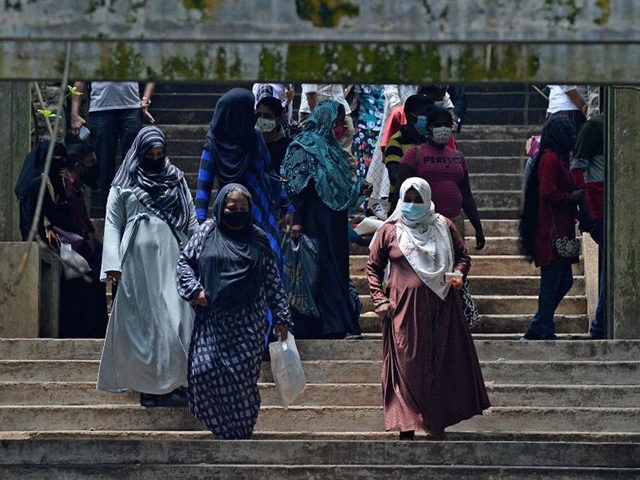 The government of Sri Lanka announced this weekend it would implement a nationwide ban on burqas, Islamic coverings for women that shield the entire face, arguing the garment presents “national security” risks.

As the federal government does not have the unilateral power to implement such a ban, ministers will reportedly be working alongside lawmakers to draft it into law. Reports indicated the government in Colombo will accompany this move with the shutdown of hundreds of madrassas, or Islamic schools, operating without government license or supervision in an attempt to diminish the influence of radical jihadist ideology.

Sri Lanka is a majority Buddhist country with significant Muslim, Christian, and Hindu minorities. It was the site of one of the deadliest Islamic State attacks in history on Easter Sunday 2019 — a coordinated series of suicide bombings that killed over 250 people. The bombers targeted churches and hotels catering to Christians with Easter-themed brunch meals. Witnesses told local media the suicide bombers in churches attempted to target the smallest children in the room, detonating their explosives in the back of the church where parents usually stand in the event they have to duck out with a fussy child at a moment’s notice.

The incident triggered widespread demands for the government to crack down on Wahhabist and other fundamentalist Islamic teachings in the country, including vocal protests from influential Buddhist monks who called for the removal of Muslim officials from powerful positions. Bombshell reports citing high-ranking officials stating that then-President Maithripala Sirisena and his top intelligence officials had received warnings from a foreign government, believed to be India, of an impending Islamic State attack, but did not act on it.

Sri Lanka’s Christians anticipate celebrating Easter on April 4, the second return of the holiday since the deadly attack.

“In our early days, Muslim women and girls never wore the burqa,” Minister for Public Security Sarath Weerasekera said in remarks Saturday, announcing he had begun the process of outlawing the garment. “It is a sign of religious extremism that came about recently. We are definitely going to ban it.”

Weerasekera added that the crackdown on improperly documented and monitored Islamic schools would affect as many as 1,000 facilities nationwide.

“Nobody can open a school and teach whatever you want to the children,” he reportedly insisted.

The Colombo Telegraph, which typically takes an anti-government stance, noted that a single-handed call for a ban on burqas from the public security minister “has no legal basis,” and the ban will not take place without the nation’s Parliament drafting and approving a bill banning the garment. It also accused Colombo of bigotry against Muslim Sri Lankans, noting Muslim groups have already protested for months protocol in place to incinerate the bodies of those who die in an attempt to curb the spread of Chinese coronavirus. The outlawing of burials has reportedly resulted in hundreds of cremations of Muslim residents, outraging the community.

To quell religious concerns, Weerasekera clarified Monday that only the burqa, not more common Islamic head coverings like the hijab, would be banned in the country. He did note that the niqab — which is identical to the burqa save for allowing the wearer’s eyes to be visible — is also in the process of being outlawed, but women will still be able to cover their hair as long as their face is exposed.

“The Minister said that the intention is to not permit an[y] face coverings which cannot be removed in public if there is a need for security reasons,” Sri Lanka’s Daily Mirrorreported. “He said that face masks worn for protection from the coronavirus and full-face helmets can be removed in public upon request.”

Sri Lanka’s Christian minority is preparing for the second anniversary of one of the most deadly attacks on their population in history, and perhaps the first in which they will be able to properly mourn the victims. Last year, the majority-Buddhist government banned mass gatherings to observe the occasion in light of the then-nascent Chinese coronavirus pandemic, forcing Christians to pray together in isolation, instead. Christians were also unable to attend Easter services in person for the same reason.

Six bombings targeted Christian churches and community locations, like hotel restaurants, on April 13, 2019. Initial death tolls suggested over 350 people had been killed, but authorities modified the death toll to about 260 people after DNA testing showed many people were dismembered to such a degree as to give the appearance of a larger number of affected individuals. An estimated 500 people were injured, many continued to endure chronic issues as a result of their injuries when local media profiled them for the anniversary of the attack.

National Thowheed Jamath, a Sri Lankan organization that had pledged allegiance to the Islamic State, took credit for the bombings.

“The victims are in a desperate situation as they cannot pay due respect to their loved ones on the first year death remembrance, due to the current situation,” Fr. Lawrence Ramanayake, the director of the Christian charity Sethsarana, told Sri Lanka’s Daily Mirror last year. “They cannot have a memorial service in church or go to the cemeteries. They are in a very pathetic situation right now.”

The Buddhist-run Sri Lankan government responded by shutting down dozens of mosques and other Islamic facilities found to be teaching Wahhabism, the form of Sunni extremism that inspired the Islamic State and similar jihadist groups like al-Qaeda. Immigration officials also began mass deportations of foreigners with suspected ties to Islamic groups and investigations into groups like National Thowheed Jamath.

All of Islam is based on Muhammad, the Koran, sira & hadith. It is just silly to claim Wahabism or “sunni extremism” is different from mainstream Islam. It’s all the same thing.

Sinhalese Buddhist leaders responded to the attacks by actively pressuring the government to minimize Muslim influence in the country. Athuraliye Rathana Thero, a prominent monk, began a hunger strike calling for all Muslims in the ministerial positions to resign, which they did.

“The Muslims don’t love us. … That this is a community who poisoned our people and tried to destroy our people is very clear. It is very clear,” another Buddhist leader, Asigiri Chapter Prelate Warakagoda Sri Gnanarathana, said at the time, urging boycotts. “Because of this, Buddhists must protect themselves. Don’t go to those [Muslim] shops. Don’t buy from those shops. The young people who ate from those shops, I think, will not be able to have/lose their children. You should know this.”

One thought on “Sri Lanka bans burqa & cracks down on madrassas”