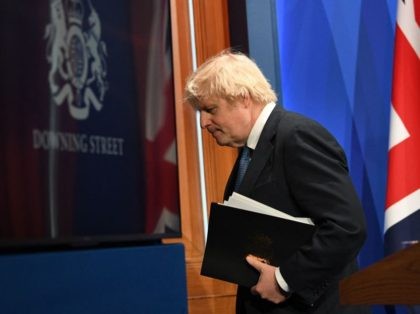 For over a year now, Johnson has been stringing along his gullible electorate with airy promises of jam tomorrow. [The jam, in this context, would be a return to the pre-pandemic ‘old normal’ ].

Yet time and again he has failed to deliver. Worse, the longer this pantomime drags on, the more powerful and totalitarian Johnson’s burgeoning biosecurity state appears to grow, and the less and less free ordinary people seem to become.

Johnson’s most recent announcement on ‘vaccine passports’, cruelly timed for Easter Monday when families might have expected a glimmer of hope rather than more grinding despair, was typical of his slippery, devious, procrastinating style.

There is absolutely no question of people being asked to produce certification, or covid status report, when they go to the shops or to the pub garden, or to the hairdressers or whatever on Monday [12th].

But this will have reassured no one. Not, at any rate, anyone remotely familiar with the serpentine workings of Johnson’s forked tongue.

As even an exasperated Fraser Nelson felt compelled to point out in the generally pro-government Spectator, this was a ‘disingenuous response.’

No one was asking about Monday. It’s about the new system he left Michael Gove is charge of, for use in the summer after the PM’s final 21 June roadmap deadline has passed. The conclusion of the government’s first lockdown review, published today, primarily looks at vaccine passports and international travel. It clearly says that vaccine identity cards could be demanded ‘in hospitality settings’ — in other words, in pubs. Contrary to what some of the weekend papers had been briefed, a passport for the pub is a live idea.

Yes, indeed. My personal suspicion is that, behind the scenes, the Johnson administration has long since decided that, for reasons which have little to do with coronavirus and almost everything to do with surveillance, it wants to make ‘vaccine passports’ compulsory. But Johnson, sensing correctly that such a measure is going to be deeply unpopular, has decided to duck the issue by lying through his teeth.

You know things are bad when even the low-rent leader of the opposition is able to land proper blows on the Prime Minister on any given subject — in today’s case, it is the government’s violent vacillation over these ‘vaccine papers’.

Johnson’s relentless mendacity appears to have infected his henchmen too.

Here, speaking to Sky News only four months ago, is Cabinet Office Minister Michael Gove reassuring everyone that vaccine passports will not be necessary to go to the pub.

Cabinet Office Minister Michael Gove says people will not need a vaccine passport in order to go to the pub and adds it's a "big challenge" to persuade people to have a #COVID19 vaccine.#KayBurley https://t.co/z5CcQFn5bQ pic.twitter.com/ebneTmghc5

‘A vaccine passport in order to go to the pub?’ asks Kay Burley.

‘Will I need to have a vaccine passport to go to the theatre or a sporting event?’ asks Burley.

Gove goes on to admit the fundamental problem with making everyone take vaccines.

Yes, there are [people who don’t want to take vaccines] and I think that’s a big challenge to persuade people who are opposed to taking a vaccine that it’s in all our collective interest. We know that there’s been this issue with measles in the past, we know that if you don’t have as many people vaccinated as possible there are measles outbreaks. I think we can take on some of the arguments from the anti-vaxx brigade – they’re not really based on science. There’s a very rigorous process we undergo to be sure that vaccines are safe.

Yep, Gove’s cheeks are definitely moving as he says this. Except I think it’s the large pair of hairy cheeks he keeps under his kilt than the ones he has on his face.

The appeal to ‘collective interest’ is aimed both at shaming, even demonising, the non-compliant as ‘selfish’, while simultaneously giving those who do comply a warm glow of smugness that they are behaving altruistically.

What’s sad about the approaching ‘vaccine passport’ tyranny is that in their younger days both Johnson and Gove would have rightly seen it as illiberal, unnecessary and completely unBritish.

What’s even sadder, though, is that both are now far too drunk with power to be capable of changing tack – unless forced to see the error of their ways by concerted public pressure.

Perhaps, the examples set by U.S. states such as Florida and Texas may serve as a timely reminder that it’s quite possible to return to the ‘old normal’ right now…