Greece accuses Turkey of trying to provoke it with migrant boats 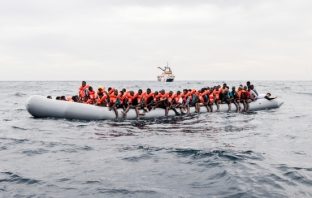 Lefturds & activists from Soros’s Open Society Justice Initiative are going apeshit over this.

According to Interior Minister Kaare Dybvad Bek, too many non-Western foreigners in one area “increases the risk of an emergence of religious and cultural parallel societies”.

In a recent meeting hosted on Facebook, Bek said: “We need to get better at spreading cultures so that not all perpetrators of violence live together and reinforce the norms they have been accustomed to.”

‘We Are Suffocating’: Migrants In Lesbos Camp Appeal For Help

Who asked them to come? WTF is a “migrant?” There is no right whatsoever to ruin a country and then move to another. These people have no claim. They are not refugees & they are not entitled to asylum. They are welfare seekers.

They need to be shipped back before they even get their feet on the ground.

One thought on ““We live like pigs”- Conglolese “migrant” in Greece”