Prof. Luc Montagnier said that epidemiologists know but are “silent” about the phenomenon, known as “Antibody-Dependent Enhancement” (ADE)

Update: Scam of the Millennium…..

Dementia Joe is threatening you:

PRES. BIDEN: "Those who are not vaccinated will end up paying the price." pic.twitter.com/qQ7cAyoYUW 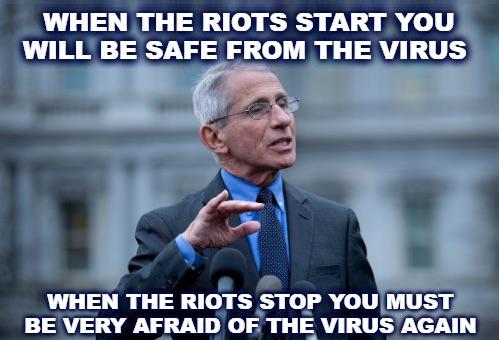 Evidence accrues that the Debt Star’s highest paid bureaucrat, liberal darling and admitted liar Anthony Fauci, is responsible for directing US taxpayer money to fund the research that produced Covid. But we mustn’t blame Fauci, or even the Chinese communists he has showered our money upon. Covid is our fault because we are racist, as Dr Fauci revealed during an online Emory University commencement address on Sunday:

[Fauci] noted [that allegedly oppressed minority groups] are more likely to become infected if exposed because of medical conditions such as hypertension, chronic lung disease, diabetes, or obesity.

“Almost all relate to the social determinants of health dating back to disadvantageous conditions that some people of color find themselves in from birth regarding the availability of an adequate diet, access to health care, and the undeniable effects of racism in our society,” he continued.

If blacks are prone to obesity and diabetes because they eat too much junk food, and that makes them more vulnerable to Covid, it is only because America is racist.

Just as a baseball player may tip his pitches, or a poker player’s mannerisms may give away that he has a weak hand, left-wing demagogues like Fauci signal that they are telling an especially preposterous lie by calling it “undeniable.”

Fauci is infamously clueless, but the deranged rhetoric he spews reflects the official ideology of the government science establishment — i.e., critical race theory.

“Confronting the impact of racism will not be easy,” the CDC’s director, Dr. Rochelle Walensky, said in a statement on the agency’s website.

Instead of defending us from foreign enemies, the Pentagon defends our leftist rulers from dissent. Likewise, instead of combatting diseases, technocrats like Fauci and Walensky combat regular Americans by demonizing them as “racist.”

This is rich, thrown in with his divisive race rhetoric:

“Societal divisiveness is counterproductive in a pandemic,” Fauci said. “We must not be at odds with each other since the virus is the enemy, not each other.”

Historians owe Dr Fauci gratitude for making it understandable how France could have become so infuriated at its ruling class as to make the excesses of the French Revolution possible.