Being White as a Malignant Condition

She's a psychiatrist who lectured at Yale. Her fantasy is to shoot a random white person, whom she says are "demented, violent predators" who "make my blood boil," in the head. Let's make her famous! @Yale @aruna_khilanani https://t.co/al5Xp636Ud

NYC psychiatrist Aruna Khilanani is not an outlier. She had reason to expect a sympathetic response when she proclaimed before a Yale School of Medicine audience that she fantasizes about murdering random white people. Radicals are establishing critical race theory as the official ideology of the liberal ruling class. In Khilanani’s field, it is already so entrenched that the Journal of the American Psychoanalytic Association recently published a piece entitled, “On Having Whiteness.” Presenting the abstract:

Whiteness is a condition one first acquires and then one has—a malignant, parasitic-like condition to which “white” people have a particular susceptibility. The condition is foundational, generating characteristic ways of being in one’s body, in one’s mind, and in one’s world. Parasitic Whiteness renders its hosts’ appetites voracious, insatiable, and perverse. These deformed appetites particularly target nonwhite peoples. Once established, these appetites are nearly impossible to eliminate. Effective treatment consists of a combination of psychic and social-historical interventions. Such interventions can reasonably aim only to reshape Whiteness’s infiltrated appetites—to reduce their intensity, redistribute their aims, and occasionally turn those aims toward the work of reparation. When remembered and represented, the ravages wreaked by the chronic condition can function either as warning (“never again”) or as temptation (“great again”). Memorialization alone, therefore, is no guarantee against regression. There is not yet a permanent cure.

Author Donald Moss is not blazing new ground in academia. The Federalist gives the example of Noel Ignatiev…

…a now-deceased historian, Harvard lecturer, and former member of the Communist Party who founded a journal titled “Race Traitor,” whose motto was “Treason to whiteness is loyalty to humanity.”

Ignatiev wrote an article for the Harvard Magazine entitled “Abolish the White Race,” in which he argued that “The goal of abolishing the white race is on its face so desirable that some may find it hard to believe that it could incur any opposition other than from committed white supremacists.”

That must be why anyone who opposes the radical left agenda is denounced by the media/Democratic Party as a “white supremacist.” President Biden informs us that such people are terrorists and constitute the “most lethal” threat facing the country. Clearly such a threat must be eradicated.

The last time a ruling class devoted itself to an ideology grounded in racial hatred, it led to the Holocaust. When Moss finds the “permanent cure” he has been looking for, it might look something like the Final Solution.

It has already become physically dangerous to be white. That the moonbats espousing critical race theory are often white themselves makes it more depraved but not less menacing. 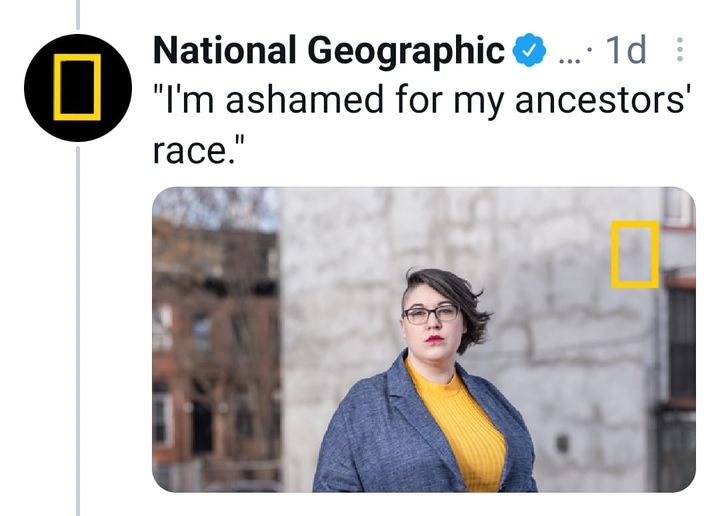 Willing to bet your ancestors’ race isn’t too thrilled with you, either.

This woman got into, and graduated from, her program because she is a woman and claimed to be a minority. No one dared fail her. Now we have an unqualified hateful bigot claiming to be an authority.

One thought on “Being White as a Malignant Condition”