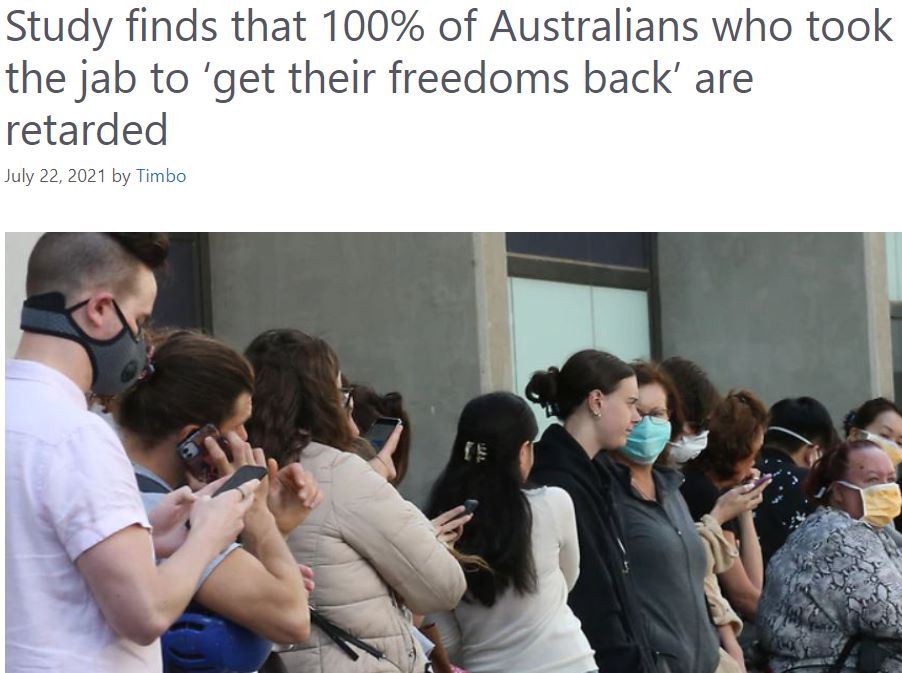 The study, conducted by the Institute for Based Australians, has also confirmed that the average IQ in Australia has dropped at least 20 points in the last five years and almost none of the 2 million plus vaccinated are ‘familiar with the concept of history.’

With the country still locked down and with vaccine passports and social credit scores on the way, experts said the findings of the study were concerning.

Even if Democrats are still milking Covid, we are close enough to being past it to look back and learn some lessons. Lesson #1 is that succumbing to politically contrived hysteria did more damage than the disease itself:

Instead of keeping calm and carrying on, the American elite flouted the norms of governance, journalism, academic freedom — and, worst of all, science. They misled the public about the origins of the virus and the true risk it posed. Ignoring their own carefully prepared plans for a pandemic, they claimed unprecedented powers to impose untested strategies, with terrible collateral damage. We still have no convincing evidence that the lockdowns saved lives, but lots of evidence that they have already cost lives and will prove deadlier in the long run than the virus itself.

The liberal establishment demonstrated the wrong way to react to a pandemic. As for the right way,

After locking down last spring, Gov. Ron DeSantis reopened businesses, schools and restaurants early and rejected mask mandates. If Florida had simply done no worse than the rest of the country during the pandemic, that would have been enough to discredit the lockdown strategy. But the outcome of this experiment was even more damning: Florida’s age-adjusted COVID mortality rate is lower than that of all but 10 other states.

Florida is no anomaly:

Sweden, Finland and Norway rejected mask mandates and extended lockdowns, and they have each suffered significantly less excess mortality than most other European countries.

Normally, liberals are eager to emulate Scandinavia, because of the high taxes and extravagant welfare states. Not this time though.

The only thing Democrats learned from their mishandling of Covid was how much tyranny a panicked populace will tolerate.