Looks like the Mohammedans have taken over the town square in Athens. 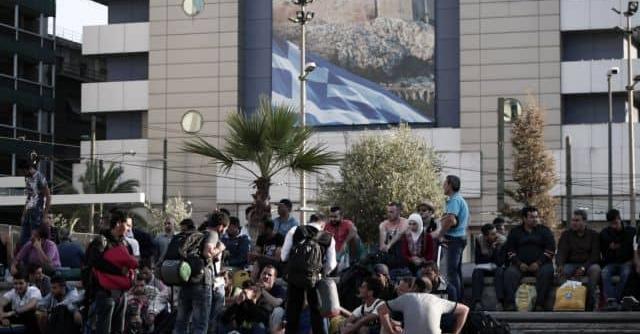 The centre of Athens is at the mercy of gangs of migrants and the so-called “Islamic Police”, which forces people to observe Islamic rules.

The actions of a complex criminal organisation and the so-called “Moutawins”, also known as the Islamic Police, check that Islamic Sharia Law is observed and cause terror among thousands of peaceful refugees and immigrants living in Athens.

People trying to live their lives in peace are harassed by savage criminals and the fanatical Islamic Police, To Vima reported.

In the case of the “Islamic Police”, according to complaints that have come to light, extremists patrol the main hangout areas of migrants, terrorising and enforce religious laws on people outside of Greek law.

The self-appointed “religious police” do not hesitate to brutally beat men and women who do not follow, according to their own standards, the rules of Islam.

An incident of savage beating of an Iranian citizen was recorded last May. The perpetrators were foreigners who found the unfortunate woman in the area of ​​Agios Panteleimon and beat her badly.

According to police sources, the incident is said to be related to groups of foreigners who occasionally take to the streets to enforce Islamic rules.

“There are many more that are either hidden or characterised as robbery. But they have clear religious characteristics and they are definitely the so-called Moutawins,” a police official said.

Similar attacks were recorded in 2017-2018 when groups of immigrants from Bangladesh were organised and made relevant attacks.

The “Moutawins” had attacked a couple of their compatriots, tying a man and hitting a woman because he had not covered her face.

The Islamic police patrols are in Omonia, Vathi Square, Metaxourgio and Kypseli, and increased during the Ramadan period. The “Islamic Police” were looking for those who do not respect the holiday and beat or intimidate them.

Two Muslim women were beaten when they passed in front of a mosque during the days of Ramadan, while it is rumoured that a woman without a headscarf was beaten and insulted in a shop in the centre of Athens.

Although immigrant organisations do not confirm the incidents, fearing the consequences, what prevails in the centre is the “Moutawin.”

Their mission is to convert non-believers, discipline indifferent Muslims and teach them the rules they must follow in the Muslim community.

Afghans, Pakistanis and Bangladeshi nationals make up the majority of patrols, although incidents have dropped recently.

Of course, the “Islamic Police” is not a Greek phenomenon. Similar religious attacks have been reported in Germany, France and Italy.

And as if the fear of religious fanaticism were not enough, migrant shopkeepers are faced with another, more dangerous action.

Gangs are looting immigrant neighbourhoods shops, and even worse, some gangs steal the pay of most of their innocent compatriots.

The gangs find accommodation for the workers they exploit, stacking them in apartments with another 20 or 30 foreigners.

At the same time, they themselves “divide” the areas into “control zones”. In return, they allow a businessman to open a shop and close it themselves if he does not pay their ransom.

Greek police often patrol the centre of Athens, but are unable to control all illegal activities. Despite the arrests and extraditions of individuals, illegality lives and reigns.

Drugs, illegal gambling, blackmail and pimping are at the forefront.

In early July, a migrant fell dead on Satovriandou Street, stabbed by an opposing gang.

The savage conditions in the centre unfortunately exacerbates xenophobic syndromes, which is why migrant organisations are calling for the abscess to be broken and for them to live peacefully.

It is worth noting that migrant shopkeepers often intervene and avoid incidents. However, they themselves declare their inability to control the “twin threat”, the “Islamic Police” fanatics and the thugs who are raiding the areas where large groups of foreigners meet.

Greece: Massive increase of attacks on Christian symbols and Orthodox churches thanks to  Mohammedan invasion

Specifically, according to the Greek Aggressional Secretariat of Religions, last year the attacks on religious buildings (includes vandalism, burglaries, thefts, sacrifices, fires, etc.) rose by 159 per cent, while the primary target appears to be the Orthodox Church.